Aston Martin will unveil one of the most eagerly anticipated convertibles of the year when the V8 Vantage Roadster is revealed at the 2006 Los Angeles Auto Show on Wednesday 29th November.

"The Vantage Roadster adds to the unbeatable thrill of open air motoring and by combining engineering excellence, technological innovation and physical perfection, will ensure every journey is one to remember."

Perfectly proportioned, with a low purposeful stance, the Vantage Roadster is uncompromisingly modern yet also incorporates classic Aston Martin design cues. The elegant lines are fused with traditional craftsmanship and striking 21st century style, with an interior hand-trimmed and finished in the finest quality genuine materials.

The Vantage Roadster will be built at Aston Martin's global headquarters at Gaydon, near Warwickshire in the UK, joining the current Aston Martin line-up. This now comprises the flagship Vanquish S, the elegant DB9 and the agile V8 Vantage Coupe. 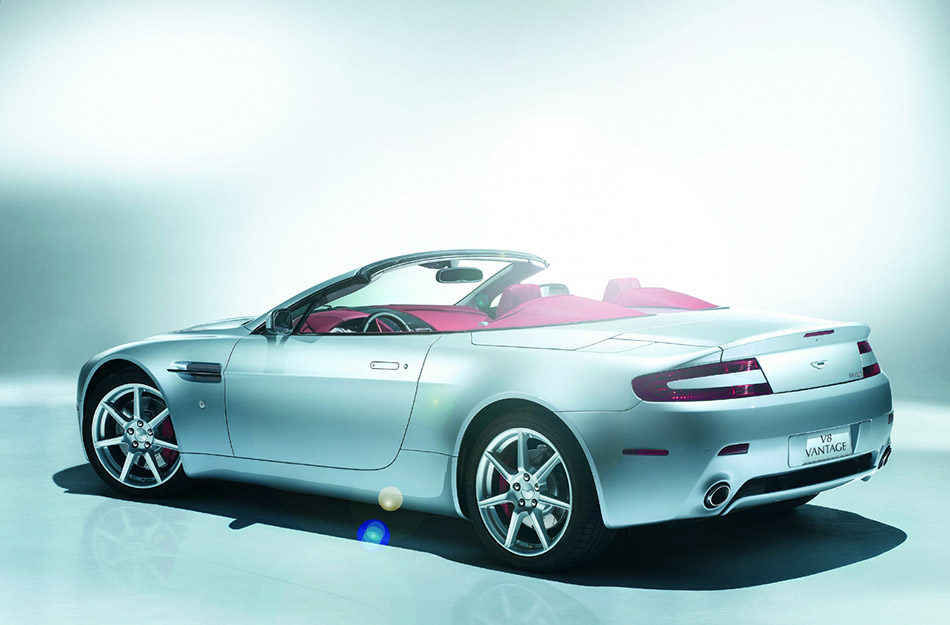 The design of the Vantage Roadster is elegant and uncompromising, a single fluid form with characteristic attention to detail, both inside and out, representing the open sports car in its purest form.

The Vantage Roadster represents the latest evolution of Aston Martin's synthesis of craft and technology. From the beautifully hand stitched leather seats to the hand-finished bodies, to the ultra-modern Aston Martin V8 engine, hand-assembled at a dedicated, high-technology facility in Cologne, Germany, the Vantage Roadster is an exclusive, advanced and uniquely desirable sports car.

The three-layer fabric hood gives a taut, aggressive appearance when closed and when folded, the flow from front to rear is smooth and elegant, enhanced by the leather speed humps that create a unique transition between interior and exterior. Even in convertible form the Roadster retains the critically acclaimed design of the Vantage Coupe. The hood is stowed neatly beneath the rear tonneau cover and is either opened or closed at the press of a button located on the centre console, in just 18 seconds, and at speeds of up to 30mph (50km/h) with no manual intervention required.

Offered with an imaginative combination of different leathers, contemporary fabrics and aluminium, Vantage Roadster customers will have an extensive choice of body and trim colours from which to choose.

Developed from the outset alongside the V8 Vantage Coupe which was launched in 2005, the Roadster shares the unique-to-Aston Martin bonded aluminium VH (Vertical Horizontal) architecture – the backbone to all modern Aston Martins. Adding to this structure, sophisticated materials such as lightweight alloys, magnesium and advanced composites are used for the body, further contributing to the car's low weight and high rigidity.

Driver and passenger sit low, close to the car's centre of gravity, where they can feel the car reacting to the input of the driver – a special sensation, usually only experienced in racing cars – providing a direct and sporting connection between car and driver.

Despite the additional mechanism associated with the Vantage Roadster's convertible roof and the additional body stiffness, Aston Martin's engineering team have ensured only a minimal weight increase to preserve the agile and sporting characteristics of the V8 Vantage Coupe. At just 4.38 metres (172.5 in) long, Vantage Roadster remains not only the smallest model in the Aston Martin range but also one of the leanest cars in its class.

The Vantage Roadster delivers exceptional performance with careful development and engineering ensuring that the Roadster equals the achievements of its Coupe sibling, with 0-100km/h (62mph) achieved in 5.0 seconds (0-60mph in 4.9 seconds) and a potential maximum speed of 280km/h (175mph).

Vantage Roadster will be available with two transmission alternatives from launch. Offered as standard is the fast-shifting, six-speed Graziano conventional stick-shift manual gearbox, with ratios perfectly matched to the performance of the V8 engine. This is joined by Aston Martin's new Sportshift automated manual transmission – an ultra-quick system that provides the driver with heightened precision via fingertip control of gear changes using paddles to progress smoothly and swiftly through the ratios.

Deliveries of the V8 Vantage Roadster are expected to commence during quarter two 2007, with prices to be confirmed at a later date.