Sporty, spacious, comfortable and multifunctional – the Audi Q5 has a versatile and successful character. Now the mid-class SUV is even more attractive, efficient and sporty – adding many new solutions in design, infotainment, chassis and engines. The Q5 hybrid quattro, the brand's first production hybrid model, unites the power of a V6 with the fuel economy of a four cylinder.

Engines
Audi is launching its updated Q5 with five engine options: three TDI and two TFSI engines. All of these engines combine direct fuel injection with charging, and a start-stop system is standard in all versions. Although most of the engines have enhanced performance, their fuel consumption values were reduced by up to 15 percent. 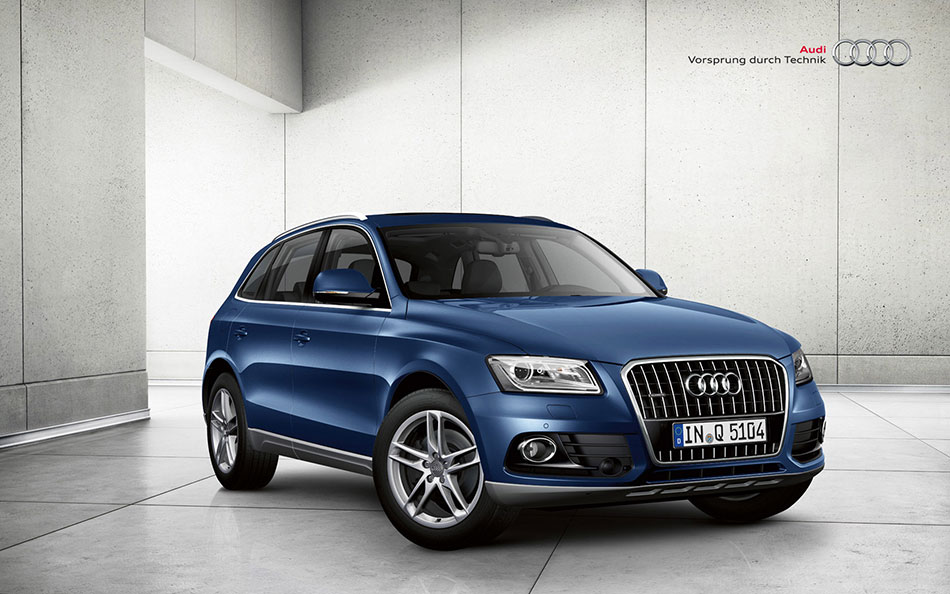 Transmissions
Each of the engines in the updated Q5 has an optimal transmission system. The four-cylinder engine operates with a manual six-speed transmission as standard equipment. The highly convenient eight-speed tiptronic is available as an option for the 2.0 TFSI with 165 kW (225 hp); it is standard in the 3.0 TFSI. The sporty seven-speed S tronic, on the other hand, is standard in the 3.0 TDI and available as an option in the 2.0 TDI with 130 kW (177 hp).

The transmissions are integrated in the innovative thermal management system of the four-cylinder versions, a system that significantly shortens the warm-up phase after a cold start. All transmissions have wide gear spreads – the long gear ratios in the upper gears reduce fuel consumption, while the short gear ratios of the lower gears improve dynamic performance in highway driving.

The quattro permanent all-wheel drive system is standard with all but one engine – only the 2.0 TDI with 105 kW (143 hp) has front-wheel drive. Normally, the center differential distributes engine power to the rear and front axle at a ratio of 60:40, but it can redistribute the power at lightning speed when necessary. The torque vectoring system finishes its job with finely tuned brake interventions.

Chassis
The chassis of the Audi Q5 – with its five-link front suspension and trapezoidal-link rear suspension – adds new refinement and comfort in the characteristics of the springs, shock absorbers and stabilizers. The new electro­mechanical power steering system gives the driver a better feel for the road with direct gearing. The system – which adjusts its power assist to vehicle speed – does not consume any energy in straight-line driving, reducing fuel consumption by about 0.2 liters per 100 km.

The Q5 has 17-inch aluminum wheels and size 235/65 tires (18-inch wheels from 165 kW [225 hp]). Audi and quattro GmbH can deliver wheels with up to 20-inch diagonals and tires up to 255/45. Customers who are particularly focused on sports performance can order the S line sport suspension. The electromechanical parking brake may be supplemented with the optional Audi hold assist, and the standard downhill assist function controls vehicle speed on steep descents. Electronic stabilization control (ESC) adapts its interventions to characteristics of the road surface.

Another high-end feature in the Audi Q5 is the Audi drive select system. It lets the driver vary the characteristic of the accelerator pedal, the shift points of the automatic transmission, amount of power steering assist and operation of the automatic air conditioning system via four modes, including an efficiency mode. When an Audi navigation system is ordered, a fifth mode is added that is largely user-programmable.

In addition, three optional components may be integrated in Audi drive select. They are adaptive cruise control, chassis with damping control and dynamic steering, in which the steering gear ratio is modified as a function of vehicle speed via a harmonic drive system. At performance limits in driving through curves, it compensates for understeer and oversteer by intervening with slight steering pulses.

The Audi Q5 is progressive and sporty, spacious and functional. Its styling, with a coupe-like roof line and wrap-around tailgate, visualizes all of these properties – and it is now acquiring distinctive new traits. The interior design of the headlights has been modified; the LED daytime running lights of the optional xenon plus units are shaped as curved bands that surround the headlights. Audi also offers the optional adaptive light with dynamic cornering light and static turning light.

The horizontal lines of the high-performance SUV's front end are emphasized more strongly. The high-gloss black Singleframe grille has beveled upper edges; its vertical chrome struts and the Audi rings have a sculpted look. The modified bumpers integrate air inlets with high-gloss black inserts and fog lights with chrome rings.
When xenon plus headlights are ordered, the tail lights are also designed with a layout of visually uniform LED light bands. The diffuser insert and the tailpipes that taper at the bottom have been redesigned – in two versions, depending on the engine. Roof rails and crossbars are standard equipment.

The engine hood and trunk lid consist of aluminum, while a large share of the car's structural elements integrate ultra-high-strength steels; they reduce weight and improve crash safety. The high-performance SUV's interior has a solid and highly comfortable look. Audi received the "Euro Car Body Award" for the Q5 body – the most prestigious award in car design.

The interior of the Audi Q5 has made additional strides in refined styling. Many of the user controls have narrow chrome trim; the steering column control stalks, ignition key and instruments were given subtle modifications. The narrow panels of the center console are high-gloss black. All steering wheel versions, including versions with shift paddles, reflect the new Q-specific styling.

The ergonomics have also been fine-tuned. The central media component, MMI navigation plus, now has four buttons, and its volume dial has an additional skip function. Other refinements have been made to the controls for the seat heating, the new highly efficient air conditioning system, the Audi drive select system and the multifunction steering wheel.
Extras worthy of special mention are the convenience key, three-zone automatic air conditioning system and climate-controlled comfort seats with a ventilation function. The panoramic glass roof also creates a pleasant atmosphere in the interior.
An uncompromisingly high quality of workmanship is a matter of pride at Audi. Selections of materials, colors and upholstery fabrics have been updated – three new interior colors, three fabric and three leather qualities and a total of 35 different combinations offer plenty of latitude when it comes to customization.
Large fabric-upholstered surfaces are standard on the door trim panels; inlay options include three wood veneers and one aluminum version. 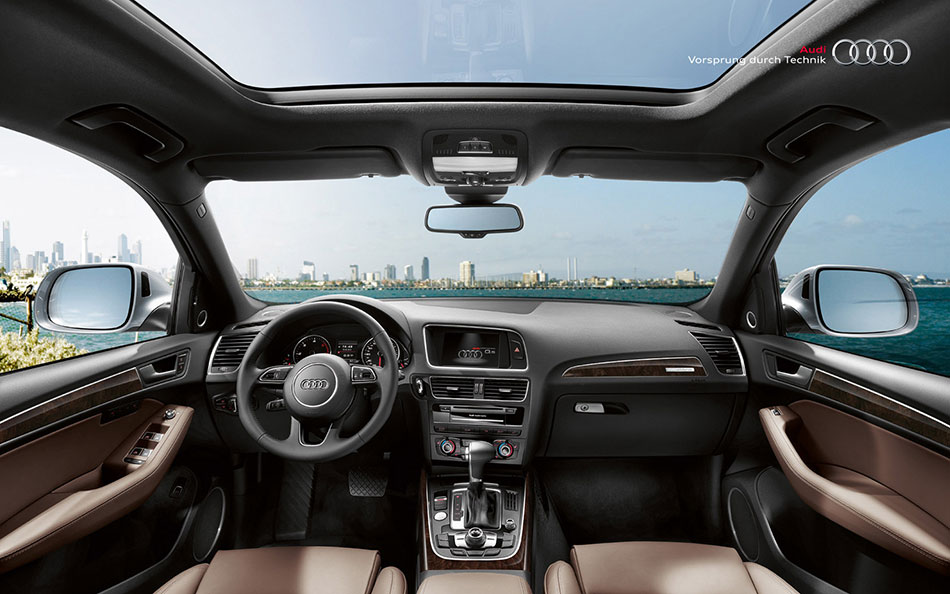 The Audi Q5 is a car with outstanding practical talents when it comes to recreational and family activities. It offers ample interior space with a long wheelbase of 2.81 meters (9.22 feet). The seatback angles can be adjusted on the rear seats. When these seats are folded – which is very easy using the remote seatback unlatching feature – the cargo capacity increases from 540 to 1,560 liters (19.07 to 55.09 cubic feet).

Audi offers an optional rail system for the cargo space, an electric drive for the tailgate, folding front passenger seatback and rear seating system with ten centimeters (3.94 inches) of longitudinal adjustment together with cargo pass-through feature. The Audi Q5 is also a powerful towing vehicle with up to 2.4 metric tons of trailer load, depending on the engine and hill incline.

Driver assistance systems
In the updated Q5, the driving is relaxed and carefree – in part due to the highly developed assistance systems from Audi. The driver information system with rest recommendation is a standard feature. If the system detects that the driver's attentiveness is waning – based on steering wheel movements and other parameters – it recommends that the driver take a break from driving.

Assuming a central role among the optional assistance systems is adaptive cruise control. The radar-based cruise control system controls the distance to the car ahead in traffic; at speeds under 30 km/h (18.64 mph) it can initiate hard braking if it detects an impending collision. Audi active lane assist can support the driver with small steering interventions to stay on track in a lane. Audi side assist monitors the space behind the Q5 to support the driver in changing lanes.

Infotainment systems and Audi connect
Audi offers a broad selection of infotainment systems in the updated Q5. Positioned at the top: the Bang & Olufsen sound system and MMI navigation plus with a large hard drive, seven-inch color monitor, 3D graphics and DVD player. Many system details have been improved, e.g. voice control and the optional digital radio reception. The system is a standard feature in the Q5 hybrid quattro, together with the Audi sound system and color driver information system.
The Bluetooth car phone online perfectly complements MMI navigation plus. Its integrated WLAN hotspot lets passengers surf the Internet and email with their mobile devices. For the driver, it brings customized Audi connect online services into the car, such as Google Point of Interest search by voice control, navigation with Google Earth images and Google Street View. Audi traffic information online, a service of Audi connect, offers the driver up-to-the-minute information about traffic on the selected route. Another new feature is the smartphone app Audi music stream. Q5 drivers can use it to receive more than 5,000 Internet radio stations, and they can save their favorites to their cell phones. The selected program accesses MMI navigation plus via WLAN, and its audio signal is output over the audio system loudspeakers. Web radio is also controlled from the vehicle's user terminal.

A highly modified eight-speed tiptronic transmission transfers engine power to the drivetrain without requiring a torque converter; its mounting space is taken by the electric motor, which is combined with a multi-plate clutch. The clutch engages and disengages the electric motor and the TFSI. A compact and lightweight lithium-ion battery system with 1.3 kWh energy capacity stores electrical energy. A complex air cooling system maintains battery temperatures within a suitable window.

The driver switches between the three driving modes with a button and with the tiptronic gear selection lever. The EV characteristic map prioritizes the electric drive, while the D mode efficiently controls both the internal combustion engine and electric motor. The S mode and the manual shift gate of the tiptronic are configured for a sporty style of driving.

Within these constraints, the hybrid control module chooses the best operating mode at any given time. The Audi Q5 hybrid quattro can be driven with just the TFSI, just the electric drive or in hybrid mode. It can also recover energy during deceleration, or it can boost output for powerful acceleration when both drives work together.

Outside, the Audi Q5 hybrid quattro can be recognized by its fully painted bumpers and by the hybrid-specific ten-arm turbine design of its wheels. 19-inch wheels are standard; 20-inch wheels are optional. Inside, special instruments display the hybrid's operating state – such as the powermeter, which replaces the tachometer.

Prices
Despite extensive vehicle upgrading and the addition of new features, the price of the Audi Q5 has barely risen for customers. For example, the 2.0 TDI with 130 kW (177 hp) costs just 150 euros more than the previous model with 125 kW (170 hp); its base price is 39,900 euros. The high-performance SUV will arrive at dealers later this summer.