At the heart of the fleet of official MotoGP cars for the 2014 season is the new BMW M4 Coupé. The high-performance sports car will make its debut as Safety Car at the opening round on 23rd March in Qatar, when it will be responsible for safety in the name of BMW M GmbH. As with all the official MotoGP cars – the 2014 fleet consists of five different BMW models – the BMW M4 Coupé combines a well-balanced overall concept with captivating aesthetics.

Like its sister model, the BMW M3 Limousine, the new BMW M4 Coupé arrives with racing genes. The new model's final examination consisted of thousands of laps of the iconic Nürburgring- Nordschleife. Among the examiners were BMW DTM drivers Timo Glock and Bruno Spengler. Developed completely from scratch, the sixcylinder in-line engine with M TwinPower turbo technology and high-revolution concept generates a maximum torque of 550 Nm at a top output of 431 hp. In doing so, it exceeds the peak value of its predecessor, the BMW M3, by approaching 40 per cent. The BMW M4 Coupé accelerates from nought to 100 km/h in just 4.1 seconds. 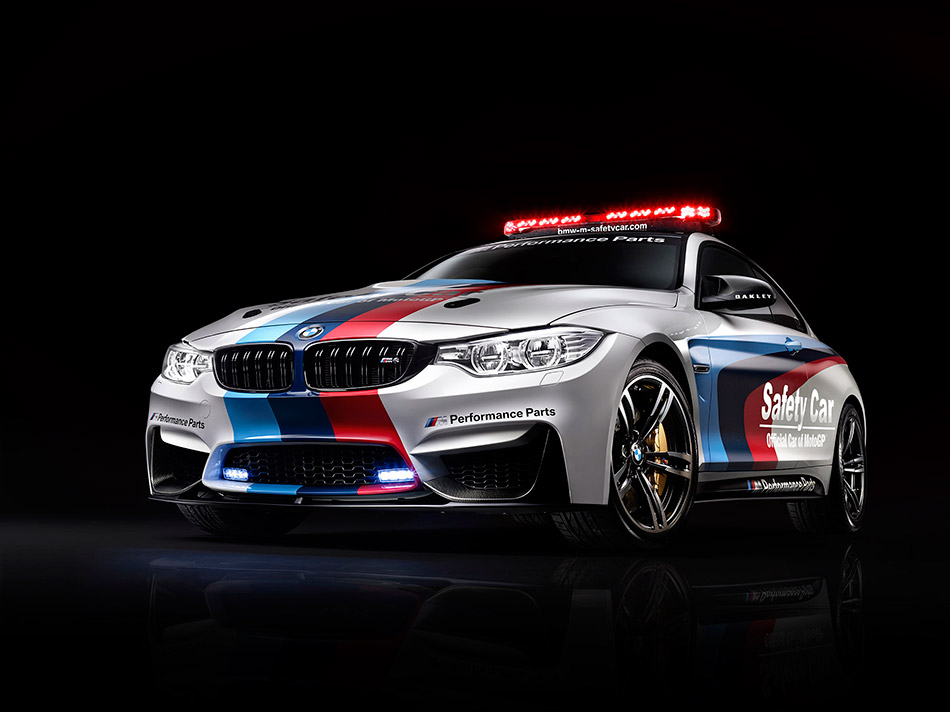 This car was designed for ultimate driving dynamics and to be used on the racetrack. Proof of this comes in the form of the innovative cooling system and the fact that it weighs 80 kilograms less than its predecessor, thanks to the consistent use of lightweight materials. For example, the roof is made of carbon.

The BMW M Performance steering wheel with race display at 12 o'clock, made of Alcantara for extra grip, creates a racing-inspired atmosphere in the cockpit. The cover on the gear lever of the double-clutch transmission is made of carbon, while the area around the lever is made of carbon and Alcantara. The handbrake is also a mixture of carbon and Alcantara. Stainless steel pedals and corresponding stainless steel footrests are also used in the Safety Cars, as are BMW M Performance foot mats. The bonnet has a motorsport lock, while the RECARO racing seat and Schroth belts provide the necessary comfort and safety while seated. LED lights on the front apron, LED lights on the roof, and the striking livery ensure that this high-performance car is unmistakably a Safety Car.