When looking to build a better, more competitive race car for the quarter-mile drag strip, who better to ask for feedback than the Sportsman drivers and the drag racing legends who have helped Chrysler Group's Mopar brand build the reputation and heritage it has in motorsports?

The best place for that to happen of course would be at the prestigious 60th annual National Hot Rod Association (NHRA) U.S. Nationals event as the largest contingent of Sportsman and professional racers get set to compete at Lucas Oil Raceway in Indianapolis, Indiana, this weekend.

On Thursday evening, Sportsman racers were invited to meet many of the Mopar legends in the sport of drag racing including Don Garlits, Roland Leong, Ted Spehar, Herb McCandless, as well as members of the original Ramchargers  — Tom Coddington, Al Adams and John Wehrly — at Mopar's racers reception held at Lucas Oil Raceway. All then got the chance to preview the first 2015 Mopar Challenger Drag Pak test vehicle and to talk with Mopar Performance Parts and SRT Motorsports engineers about the proposed next generation drag pak. 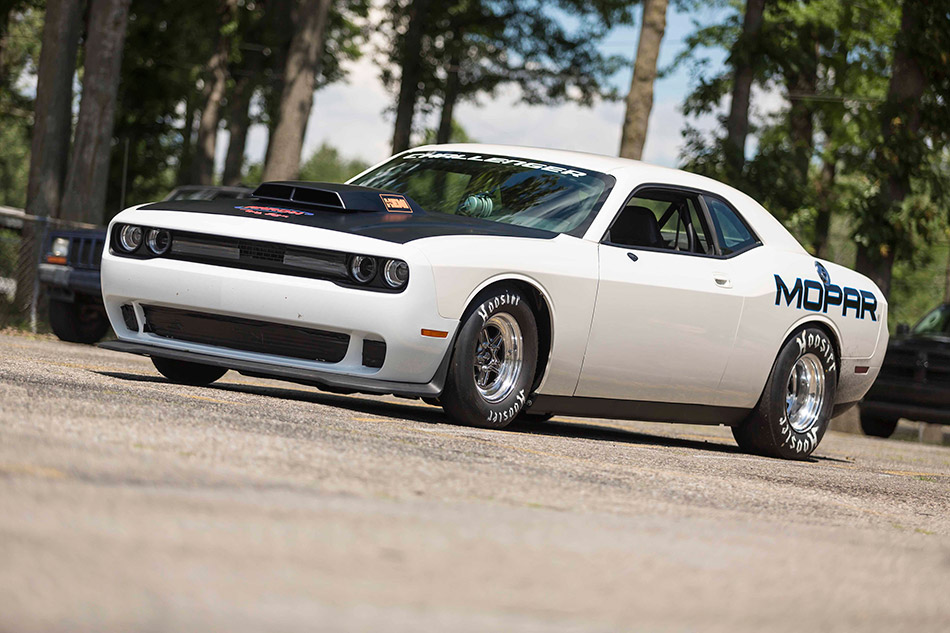 Mopar celebrates the 50th anniversary of the introduction of the Gen II 426 Race HEMI® this year. More than 45 years after the 1968 Dodge Dart and Plymouth Barracuda Mopar package cars contributed to building the brand's reputation at the drag strip, Mopar still lives up to its heritage by continuing to add to the lineage of high performance quality products.

Remaining true to its roots, the brand is continuing its commitment to Sportsman racing with the development of the next generation Mopar Drag Pak. The 2015 Mopar Challenger Drag Pak test vehicle is the next step in the evolution of the modern day package car whose earlier incarnations include more than 150 V8 Challenger Drag Paks, an additional fifty V10 versions, as well as 426 Race HEMI® upgrade kits.  The Mopar Challenger Drag Pak is the only modern era package car to win the Stock Eliminator title at the U.S. Nationals and has also won Factory Shootout races.

Under the hood, Sportsman racers saw a 426 cubic-inch Race HEMI® engine with an aluminum block, steel liners and custom engine calibration. The car boasts a Chrysler-based 727 automatic transmission, a race-style stick shifter with integral line lock, and an aluminum driveshaft. The vehicle also is equipped with a weigh box in the trunk and a trunk-mounted 12 volt battery.

The interior is currently based on the 2015 Dodge Challenger SRT interior with the addition of Mopar gauges, driver and passenger lightweight racing seats, along with safety nets and five-point harnesses.

All specifications on the 2015 Mopar Challenger Drag Pak test vehicle are still preliminary and being evaluated, as they are pending NHRA approval as well as feedback from the Sportsman themselves. The vehicle will be shown at the Mopar display in the manufacturer's midway area on Friday and Saturday during the NHRA U.S. Nationals event weekend for racers and fans to view. Also on display will be an original 1968 HEMI® Dodge Dart package car.

As proud supporter of Sportsman racing within the NHRA, Mopar continues to recognize its roots with a robust contingency program, support of the Mopar HEMI® Challenge for a 14th consecutive year and last year's addition of the "Tom Hoover Sportsman Challenge" that rewards a Sportsman class racer that amasses the most points earned in a season during NHRA sanctioned races at the wheel of a Chrysler Group vehicle, competing in either Stock or Super Stock classes nationwide.