The engineering and design teams at Ford Motor Company led the development of the one-off 2015 F-35 Lightning II Edition Ford Mustang, which will be donated by Ford and sold at the Gathering of Eagles charity event. The event is held on Thursday, July 31, 2014 during the Experimental Aircraft Association (EAA) AirVenture Oshkosh 2014 – the World's Greatest Aviation Celebration.

All proceeds from the sale of the car will benefit the EAA Young Eagles program, which has provided free introductory flights to more than 1.8 million young people since 1992, helping inspire and motivate the next generation of leaders, aviators and innovators.

"The idea to model one of our specialty builds after the F-35 was four years in the making, under discussion even as we created the SR-71 Blackbird Mustang for auction in 2010. Just as the F35 was designed with unprecedented capabilities and versatility in mind, we felt it would be a natural fit to pair with the all-new 2015 Mustang," said Edsel B. Ford II, a member of the Ford Board of Directors. "Lockheed Martin supported our requests on both vehicle builds and is bringing their F-35 Lightning II Cockpit Demonstration System, plus several test pilots, to the Ford Hangar. 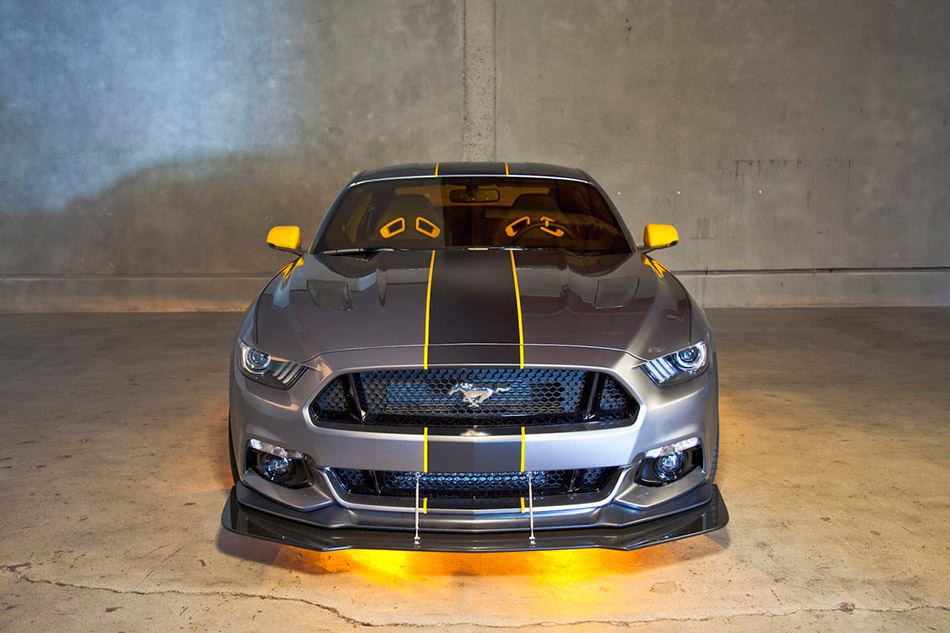 Visitors to the Ford Hangar are sure to be wowed by both the beauty of the F-35 Lightning II Edition Mustang and the opportunity to get the fighter jet experience first hand."

This one-of-a-kind sports car will be one of the first 2015 Ford Mustangs to be sold. The design of the modified Mustang GT fastback exudes a creative connection to the F-35 Lightning, while highlighting the new design features of the 2015 Mustang. Ford design manager Melvin Betancourt and Mustang chief engineer Dave Pericak led the design and engineering teams that developed this unique car.

The exterior will showcase a customized glossy and matte titanium paint scheme with distinctive accents inspired by the blue and yellow lightning tail livery applied to the early production examples of the F-35. The bubble canopy of the stealthy F-35 features a distinctive gold tint designed to help minimize its radar signature – an appearance that is replicated on the windows of this Mustang.

The springs of the Mustang GT performance pack have been replaced with Eibach units for a lower ride height and the exhaust system gets larger, ceramic-coated outlets. This Mustang rolls on a set of Forgiato-created custom 21-inch wheels to further differentiate it from anything else on the road. Additional elements include a carbon fiber front splitter, rear diffuser and rocker moldings, unique mirror skull caps and a vertically-enhanced rear spoiler.

"Ford has been a committed sponsor of EAA and AirVenture for 15 years, bringing incredible value to those who make Oshkosh the highlight of their aviation year," said Jack Pelton, EAA chairman of the board. "With its seventh Mustang donation, Ford continues to excite with its specialty vehicles, which reflects the depth of Ford's commitment and allows EAA to provide support to its valuable programs and dedicated members in helping us grow the next generation of aviators."