As a farewell to the legendary BMW S65 engines G-POWER has taken care of its strongest and most exclusive stage, namely the 4.4l version installed in the only 150 times build BMW M3 GTS respectively the even rarer four-door version the M3 CRT that has only been delivered 67 times. G-POWER is the only BMW tuner in the world offering a power output enhancement for one of the best and most exclusive BMW engines though. 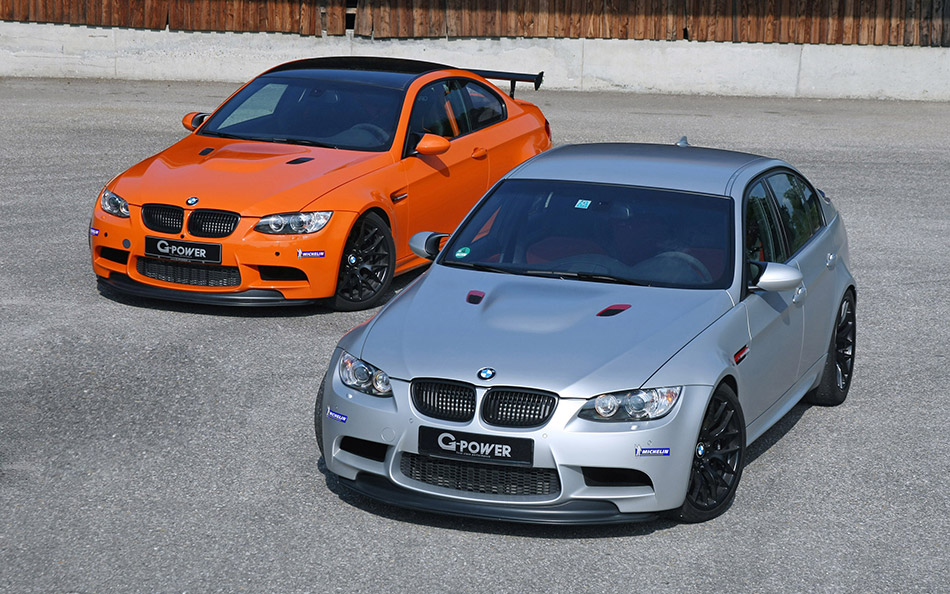 The roots of the BMW S65 V8 high-revving engine go back to the times when BMW has been actively involved in Formula 1 racing. And similar to the BMW Formula 1 engine the max. power output has been generated through a rev limit unknown for BMW V8 serial produced engines until now. German Engineering at its best.

May the differences in in the performance figures be neglectable at a first look, the picture changes completely as soon as the S65 V8 high-revving engine is started up. The way this engine responds to each and every movement of the accelerator and yaws for high rpms is something that a turbocharged engine can never accomplish due to its design layout. Thus a hug part of the fascination BMW "M" has been lost forever.

That things can be different is something G-POWER has shown for many years with its supercharger systems based on the radial superchargers from ASA Kompressor – forced induction without diluting the character of the high-revving engines. In fact it has achieved quite the contrary. Due to the adaption of the BMW M3 S65 engine to forced induction, the response, being the reaction of the smallest movements of the accelerator, has become even crispier. It feels like the engine has been directly connected to the driver's foot.

One further characteristic of mechanical supercharging using the ASA radial supercharger is the outstanding torque in the middle of the rev range, which is particularly impressive during overtaking manoeuvres. This lively response from mid-range revs increases continuously until engine speed peaks, which is also where maximum boost pressure is achieved. The acceleration experience is akin to being fired from a catapult.

A version of the renowned and globally proven G-POWER M3 "Sporty Drive" supercharger system, adapted specifically for the BMW M3 CRT / GTS raises the standard output from 450 hp to 650 hp and 630 Nm of torque. The ex works reinforced engine block of the BMW M3 CTS and GTS along with a forged crankshaft and reinforced con rods are the basis for this increase of the output maximum from 615 HP (standard M3 with G-POWER supercharger system) to 650 HP (M3 CRT / GTS with G-POWER supercharger system). But it is not just the OEM-quality of the used components that ensures the exceptionally high quality, reliability and durability of the G-POWER products. A major contribution to it comes from our engineering process that meets to industry standards, starting with the CAD engineering, followed by the prototyping and ending with test drives on the Autobahn and in hot climate countries like Saudi Arabia. A particular highlight of this engineering process is the use of the instrumentation of our technology partner AVL, by the way G-POWER being the only BMW tuner worldwide to use this equipment. It measures the exact peak pressure that develops in the combustion chamber. With this information at hand the engineers were able to develop a custom-made software for the ECU, that keeps the peak pressure in the combustion chamber of a M3 power unite equipped with a G-POWER "Sporty Drive" supercharger system similar to the stock figures. So overstraining is not an issue. More than 3000 sold G-POWER supercharger systems and the high customer satisfaction state that the huge effort made during our engineering process are worthwhile.

On the exhaust side, a lightweight, all-titanium exhaust system made by G-POWER delivers the necessary reduction in exhaust back pressure. The exhaust, developed specifically to suit the requirements of the SK II supercharger system, is equipped with 100 cpsi metal catalytic converters.