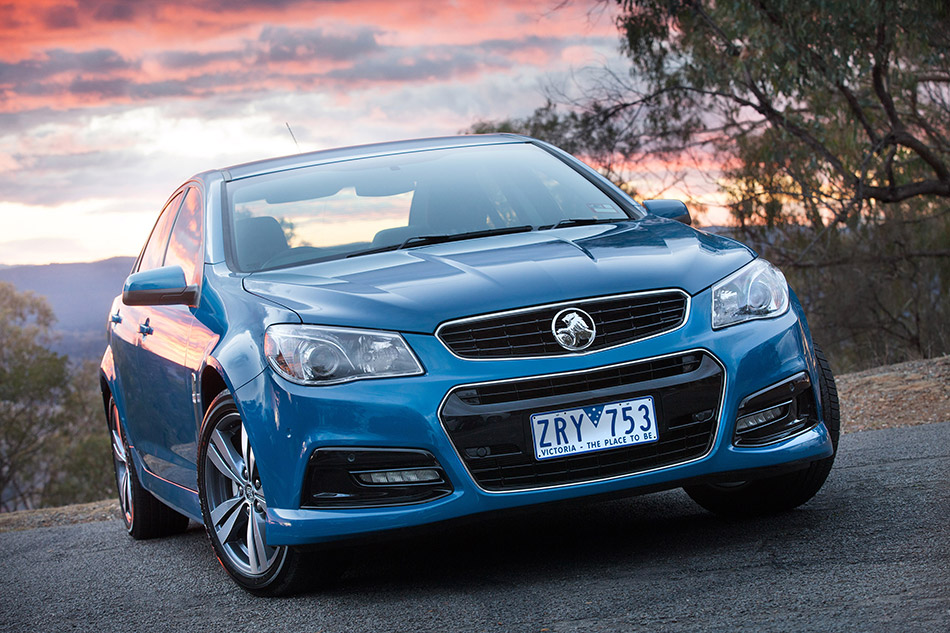 Today, more than ever, safety is one of the primary considerations for many new car buyers, and the sophisticated VF Commodore, which uses more ultra high-strength steel in its construction than ever before, is one of the safest new cars on Australian roads.

The VF has also been engineered for improved frontal pedestrian impact performance, reducing the risk of serious injury to people both inside and outside the car.

Its family car attributes are further enhanced by the addition of simple-to-use ISOFIX child seat anchorages. Commodore is one of the few cars on the road with the capability to accommodate three ISOFIX child seats across the rear seat, pending ADR approval.

It also comes with seatbelt automatic locking retractors for firmer child restraint fitment, along with a rear seat belt reminder in the Driver Information Display, so the driver can check rear passengers are properly restrained.

VF Commodore's larger volume seat-mounted airbag increases side impact protection by extending the area of body coverage. It incorporates an additional cell which inflates to a higher pressure to better distribute crash energy loads across the occupant's pelvic area as well as the chest.

The concept takes advantage of the pelvis's ability to take higher loads while limiting pressure on more sensitive thorax and abdominal areas. The thorax/pelvis airbag is located within the backrest frame of the vehicle's front seats and will deploy within milliseconds of a detected side collision contact.

"To balance all the changes driven by mass reduction imperatives in particular, we've touched everything - body structure, airbags, seatbelts, you name it - to deliver the best standard of injury risk protection yet," he said.

"We put VF Commodore through much more extensive crash scenario testing than ever before. It was very much a global activity because this vehicle is being sold in international markets and has to satisfy multiple requirements. The results exceed current 5-Star ANCAP rating requirements and satisfy broader and more demanding Holden safety engineering standards, including double rollover protection."

"Demanding crash performance criteria drove the design to satisfy GM best practice and 5-Star ANCAP ratings in front, side and rear impact, whiplash and pedestrian protection. And our test schedules for the VF Commodore safety development program were even greater in number and complexity than the original VE program."

Holden engineers have shaved 38.9 kilograms of weight from the VF chassis, modified or replaced more than 60 per cent of components and added new driving and fuel saving technologies to make the new Commodore a world-class vehicle.

Commodore's chassis systems benefited from a General Motors product development discipline known as Integration which sets the distinct driving character for each vehicle.

VF is characterised by a lighter more agile chassis, with predictable handling and stays true to Commodore's DNA with superior all-round performance character and affordability.