The QX70 is the best-seller in the Infiniti range in Germany and has demonstrated that the premium make from Japan is increasingly winning ground even in probably the most difficult market in Europe. A crossover cannot present itself in a more sporty, elegant and harmonious way than the QX70 does with its coupé-like roof lines and the high wheel arches. Too much understatement would be inappropriate to such an outstanding fundamental nature... well, that's what LARTE thinks. This Moscow-based premium car-tuning company combines extrovert vehicle design with the know-how and quality of German OEM manufacturers from whose production almost all its components are sourced. 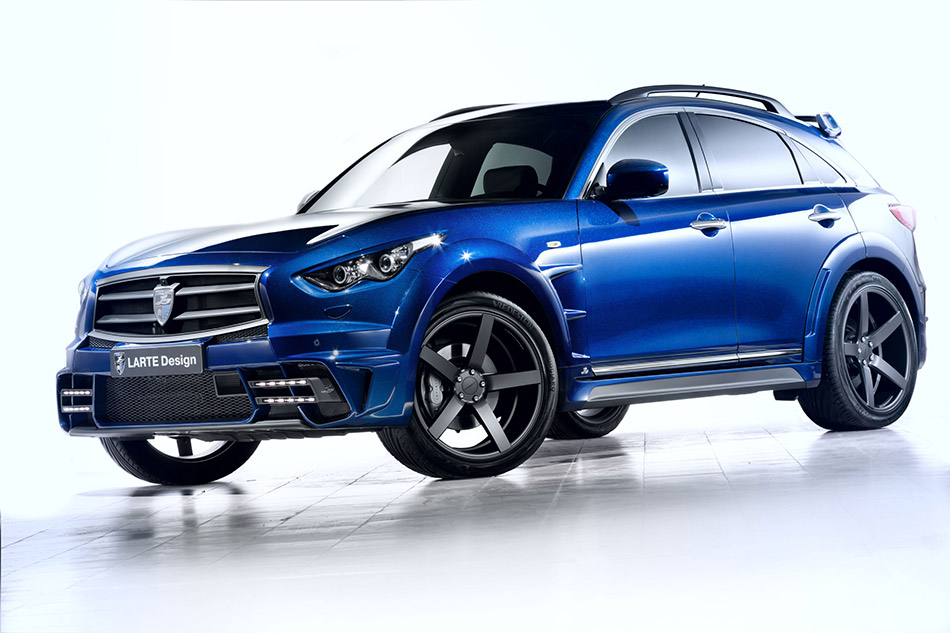 LARTE has developed a high-quality PU RIM body kit for the Infiniti QX70 that will bravely attract attention without being detrimental to the basic harmony of the vehicle as such. In response to the downward sloping end section of the roof, the designers therefore decided to use a striking rear spoiler that has been positioned so cleverly in the "round" that it does not protrude above the highest point of the roof line. The Crossover's flanks are characterised by solid side trims which visually reduce the gap between the asphalt and vehicle floor and so reinforce the sporty nature of the car. LARTE has also developed the standard vents that are located behind the wheel arches as an element of design to make them look more forceful. The broadened wings make the Infiniti five centimetres wider giving it a more muscular air.

The extensions flow seamlessly into the entirely newly designed front apron, which is dominated by a magnificent grille that replaces the QX70's standard version and which –  with its matt-black coarse struts – takes up the style elements from pick-ups and off-road vehicles. The radiator grille's cross struts are also reflected in the design of the new daytime running lights, which have been realised in the shape of double crossbars. An additional large mesh grille and many square-shaped air intakes complete the aggressive overall impression of the vehicle. A stylistically corresponding rear apron along with a sophisticatedly designed exhaust system round off the ambitious set: a total of four end pipes – two left and two right – each possessing a diameter of 101 millimeters and held in a black chrome look dominate the QX70's rear. High-quality stainless steel and the know-how of a leading Austrian-based OEM manufacturer were employed to implement the exhaust system. The laser-engraved LARTE logo is the seal of quality.