Globally unveiled at the 2008 New York International Auto Show with refreshed styling, the 2009 Kia Optima midsize sedan offers a completely modified exterior, which offers a more aggressive, dynamic style than previous models, and is outfitted with a new engine that provides more power and better fuel economy. For 2009, Optima also is larger than its predecessors, which complements its distinctive new styling and separates itself from other vehicles in the growing midsize segment.

The 2009 Optima is presented with new front, side and rear styling cues, which build upon Kia Motors' philosophy of creating dynamic vehicles that evoke passion. The fog lamps and lower front grille have been enlarged and the headlamps narrowed to create an aggressively sharper look. Wider side garnishes add sportiness while the acute front lines continue toward the back, ending on a distinctly edged trunk lid. To complete the redesigned rear fascia, tail lights are narrowed to enhance Optima's sleeker cosmetic appearance. 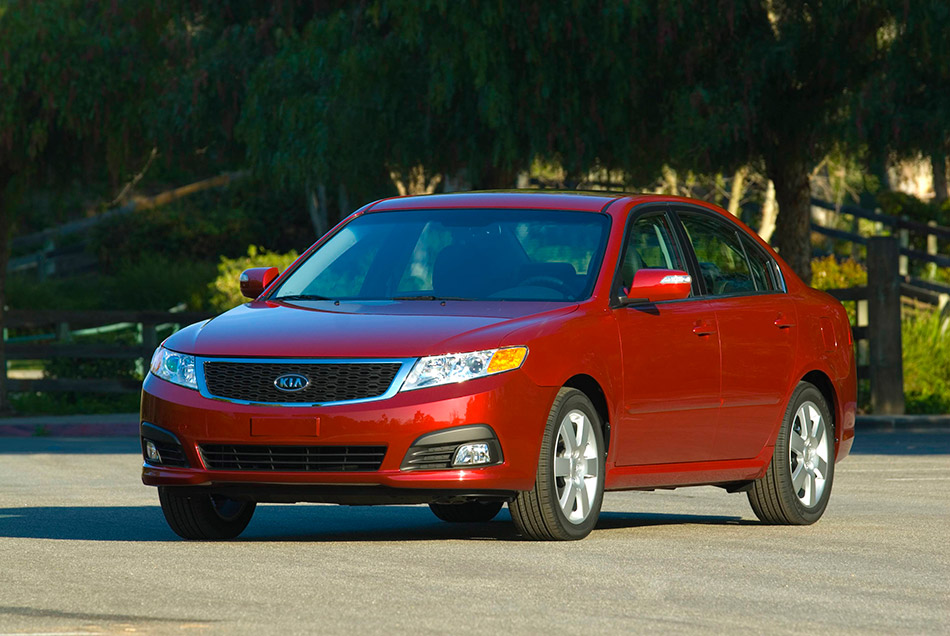 Also, new for 2009 is the addition of the sporty SX trim, which complements the well-equipped, value-priced LX (four-cylinder only) and premium-oriented EX trims. Already available with Rio, Rio5, Spectra and Spectra5 models, the SX line provides another dimension for Optima buyers looking for a sportier midsize and upgrades including a black-bezeled front grille and headlamps, and hyper-silver-finished 17-inch alloy wheels. EX models are equipped with 16-inch alloy wheels and are fitted with Goodyear tires.

The 2009 Optima's overall length also increased, extending nearly two inches in the front and one inch in the rear, to an overall length of 189 inches. The larger proportions enhance the exterior styling for a lower, leaner, more powerful stance. All other dimensions, including wheelbase, remain unchanged.

Available in two powerplants – a 2.4-liter four-cylinder or a 2.7-liter V6 engine – and two five-speed transmissions (manual with LX four-cylinder model only), the 2009 Optima introduces a new engine under its hood. When redesigned as a 2006.5 model, the peppy four-cylinder engine delivered 162 horsepower, a 15-percent increase from the previous generation. For 2009, a more powerful and fuel efficient 2.4-liter engine takes its place, producing an additional 13 horsepower. Optima's four-cylinder output increases to 175 horsepower and 169 pound-feet of torque. Also updated is the available 2.7-liter V6 engine (for EX and SX models), which delivers 194 horsepower and 184 pound-feet of torque, while mated to a five-speed, gated automatic transmission. Fuel economy for the 2.4-liter engine with additional horsepower increases to 22/32 A/T and the increased horsepower 2.7-liter engine is 20/22 A/T (city/highway). All automatics feature Sportmatic™ clutchless shifting.

Optima's four-cylinder engine is further enhanced with the introductions of dual Continuously Variable Valve Timing (CVVT) and a Variable Intake System (VIS) while the 2.7-liter V6 has single CVVT and VIS. These added systems improve the vehicle's fuel economy without sacrificing power.

Built on a unibody frame, the front-wheel-drive Optima utilizes independent front and rear suspension systems. MacPherson struts are used in the front with a multi-link layout in the rear and are joined with coil springs and anti-roll bars (standard equipment on all models) to engage drivers with responsive handling and provide utmost comfort whether the road is smooth or less than ideal.