Automobili Lamborghini presents the Lamborghini Centenario at Geneva Motor Show, in the year the company celebrates the centenary of founder Ferruccio Lamborghini's birth. Only 20 coupé and 20 roadster versions of the Centenario will be produced and all 40 cars are already sold, at a start price of 1.75 million euros plus tax.

The Centenario continues Lamborghini's one-off strategy and demonstrates Lamborghini's innovative design and engineering competencies. Using the V12 architecture, the Centenario's naturally aspirated engine produces 770 hp and powers from 0-100 km/h in 2.8 seconds, and from 0-300 km/h in 23.5 seconds with a top speed of more than 350 km/h. Braking from 100 km/h to standstill is achieved in 30 meters. A monocoque and body in full carbon fiber provide a low weight of 1,520 kg and a weight to power ratio of just 1.97 kg/hp. 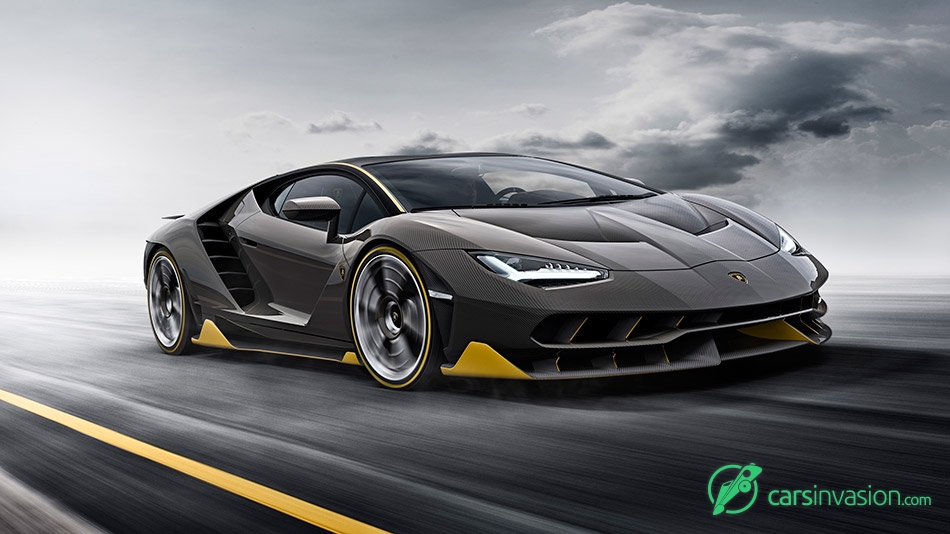 The Centenario is the truest expression of Lamborghini's commitment to new and inspirational design, allowing Lamborghini designers and engineers the freedom to create a technology demonstrator in the form of a limited edition.

The Centenario's pure and essential lines are evident in a new design language throughout, demonstrating the quintessence of Lamborghini's commitment to 'form follows function'. The car has a permeability, defined by the intakes, outlets and ducts that mark its aerodynamic superiority.

A mono line from front to back defines the recognisable Lamborghini contours, with long, low overhangs front and rear creating a clean, sensuous, mono-body shape. The Centenario measures 4.924 m long and 1.143 m high. Aerodynamic inlets made of several fins characterize both front and rear. Large air scoops in the front bonnet, while reminiscent of 1970s sports cars, are there for functionality: air is taken in through the car's front contributing to downforce on the front axle.

Furthermore, air flows through ducts within the front headlight casing and others in the sideskirts and around the wheel arches, improving the airflow to the rear radiators and providing optimized cooling. The roof including air scoops, takes its styling from aeronautic cues, enhanced by a hexagonal carbon fibre and glas engine cover.

The body of the Centenario is defined in a gloss carbon fibre. The front bonnet, scissor door panels (always reserved for V12 models) and roof line are fluent, aerodynamic and organic: the lower parts in matt carbon fibre are functional, technical and dedicated to aerodynamic superiority, including front splitter, side skirts, wheel arches and rear diffuser.

The irregular wheel arches, both front and rear, are a defining feature of the Centenario, as they have been in other Lamborghini models. Accented in matt carbon fibre and concealing airflow ducts, they highlight the aerodynamic design of the car. The profile of the rear wheel arch particularly attracts attention, accentuating the Centenario's rear-wheel steering. Pirelli PZero tyres, developed specifically for the rear-wheel steering, sit on exclusive 20"/21" front/rear rims in forged and milled aluminium. The spokes' fan shape, accented in carbon fibre, mask ducts extracting hot air from the carbon ceramic brakes, finished with a central-locking wheel nut sporting the Lamborghini bull logo. 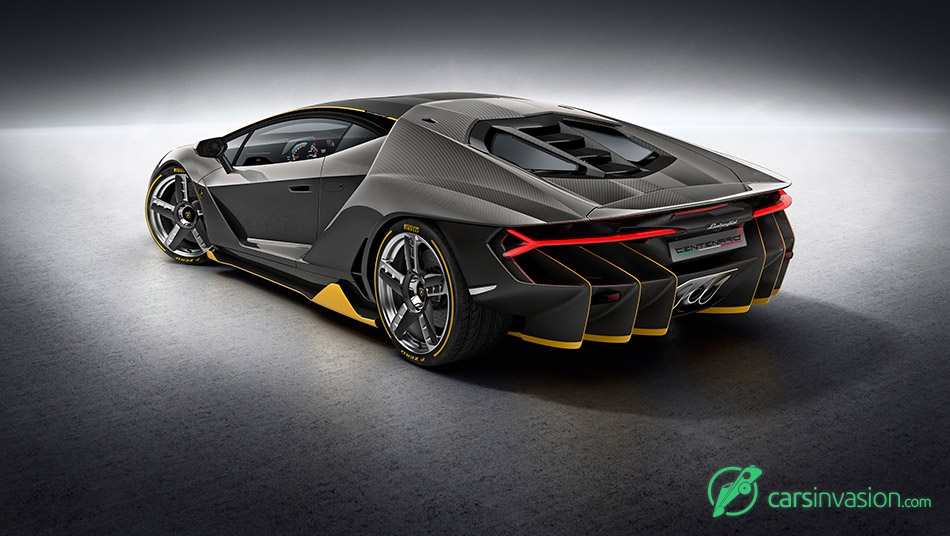 The integrated rear diffuser dominates the back of the car, its substantial dimension optimising air flow distribution, maximising the car's downforce and aesthetically emphasising the importance of aerodynamics in the Centenario. Like many mechanical parts around the car, exposed to maximise heat exchange, the rear tyres are visible, while floating in the void above the diffuser are the Centenario's 'Y'-shaped rear lights. Seemingly suspended in air but attached at each end of the 'Y', the LED lights stretch the full width of the rear. The Centenario is as distinct at night as it is during the day.

An extendable rear wing is integrated in body when stationary or at low speeds to preserve the minimalist lines of the Centenario. According to vehicle dynamic conditions and Driving Mode chosen, the wing extends to 150mm and rotates up to 15 degrees for optimal aerodynamic efficiency in high performance conditions.

The Centenario takes Lamborghini's V12 engine as its powerplant, perfectly matching the dynamic potential of the car. The highly responsive engine, even at low revs, provides the unmistakeable resonance and characteristics that only a naturally aspirated engine can. Uprated to provide an output of 770 hp (566 kW) and with the engine speed limiter raised from 8,350 rpm to 8,600 rpm, the Centenario's is the most powerful engine produced by Lamborghini to date.

The luxurious interior can be finished to each Centenario client's specification. Sports seats in lightweight carbon fiber are included, with new stitching that features on the length of the dashboard, steering wheel, sunvisors, rocker covers, and the new inner door panels made of carbon fiber and Alcantara. 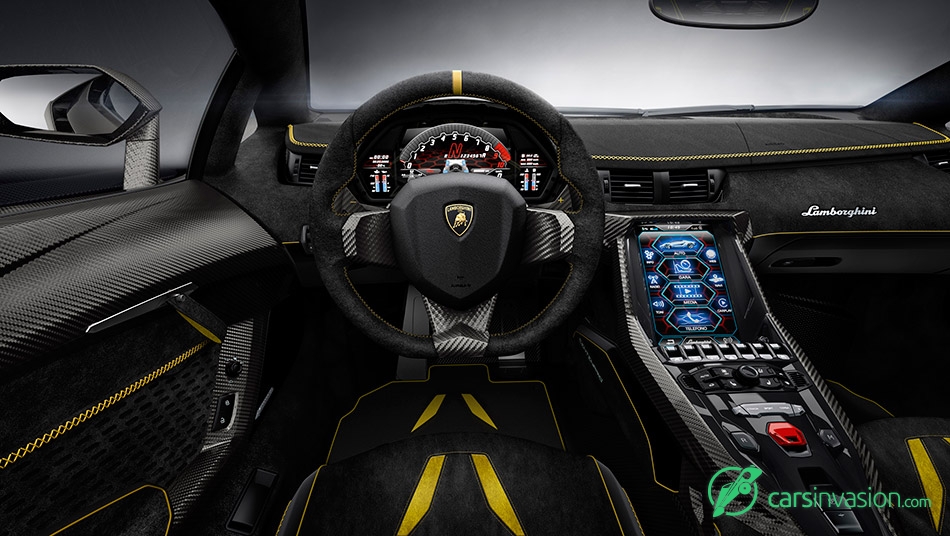 Functionality and connectivity are essential features of the Centenario. Including satellite navigation, a high definition 10.1 inch touchscreen connects the Centenario driver to both the car and the outside world. Users may browse the internet, connect to email and social media and use online applications such as web radio. Apple CarPlay is included, allowing a safe, effective way to make calls, request directions, play music and access the functionality of an iPhone.

The infotainment system includes a sophisticated telemetry function: the Centenario provides ultimate performance, both on road and, should an owner wish, on track: as evidenced by space for two helmets in the front trunk! The highly sophisticated telemetry allows speeds, times, lateral and G forces to be recorded and even compared between different occasions and different drivers. Two optional interior cameras allow the drivers' experiences to be recorded.

The Centenario will be produced as a limited edition, with only 20 coupés and 20 roadsters to be delivered from autumn 2016 and throughout 2017. All 40 Centenario models are sold, to collectors and Lamborghini enthusiasts around the world at a start price of 1.75 million euro plus tax. The company OPAC has been an important partner involved in the new model's construction together with Lamborghini's Research & Development department.

Shown in Geneva in an entirely carbon fiber finish, clients can specify their Centenario to include exposed carbon fiber or any colour and finish from Lamborghini's Ad Personam personalisation programme.

The Centenario continues Lamborghini's strategy of producing one-off cars and exclusive limited editions, which allow scope for exploring design and technology possibilities while heightening brand awareness. Starting with the Reventón and including the Sesto Elemento, Aventador J and Veneno, every car has proved its instant appeal, achieved iconic status, and increased in value.