The new Lexus LFA marks an important moment in both the history of Lexus and the development of the supercar. A true "clean-sheet" design, the Lexus LFA was created by a small, passionate and dedicated team of engineers whose achievement has been to push the boundaries of technologies materials and engineering at every stage to produce a car like no other to have carried the Lexus badge.

In the words of Chief Engineer Haruhiko Tanahashi: "The Lexus LFA is a thoroughbred supercar, a machine engineered to achieve a single goal - to deliver a supreme driving experience. Over the past decade we have pushed every boundary in pursuit of this goal and I believe we have created the most driver-orientated car we possibly could." 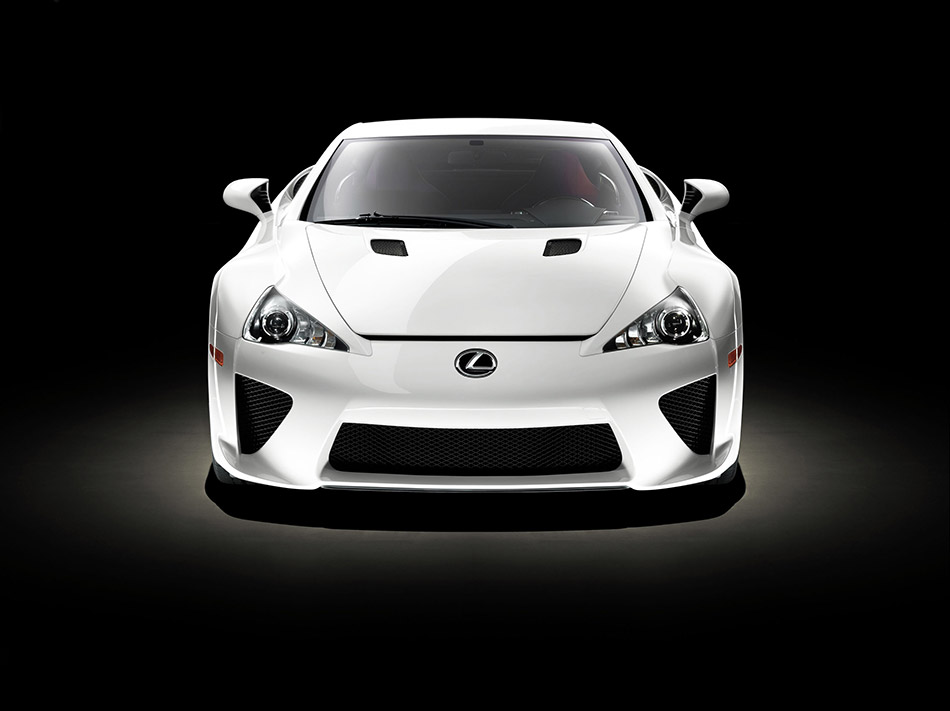 Keeping the car's weight to an absolute minimum was one of the defining elements in the development of the Lexus LFA and this led to the decision to switch from using aluminium for the car's construction to advanced Carbon Fibre Reinforced Plastic (CFRP) for the chassis and bodywork.

Moreover, Lexus decided the CFRP structure should be built in-house rather than by a third-party supplier. In doing so, it drew on Toyota Motor Corporation's heritage in textile weaving technology to push the boundaries of its technical abilities, developing new carbon fibre looms and a laser system for monitoring the integrity of the material.

At four times the strength of aluminium, CFRP gives the Lexus LFA an exceptionally stiff and strong structure, and also delivers major weight advantages, saving around 100kg on an equivalent aluminium body. CFRP accounts for 65 per cent of the body-in-white, with aluminium alloy used for the remaining 35 per cent.

Unlike the few other vehicles on the market that use CFRP construction, the Lexus LFA uses the same advanced resin technology favoured by cutting-edge aerospace programmes for its unmatched weight and strength properties.

The heart of the Lexus LFA is a bespoke, naturally aspirated V10 engine that sets new standards for compact dimensions, lightweight architecture and scintillating performance. From the outset it was determined the engine should have a 4,805cc capacity, develop 552bhp and rev to a wailing 9,000rpm red line. A 72-degree angle between the cylinder heads is ideal for achieving balance in the engine for exceptionally smooth running, while providing individual, electronically controlled throttle bodies for each cylinder gives excellent throttle response.

Using a dry sump lubrication system allows the block to be positioned deep in the engine bay, lowering the car's centre of gravity and moment of inertia, and enabling the engine to handle sustained, high-speed cornering.

The V10 produces 480Nm of torque at 6,800rpm, 90 per cent of which is available from 3,700rpm all the way to the 9,000rpm red line, thanks to Dual VVT-i technology, equal length exhaust manifolds and high-volume, 12-hole fuel injectors. This gives searing in-hear acceleration at all engine speeds and in any gear: nought to 62mph takes just 3.7 seconds and maximum speed is 202mph.

With a kerb weight of 1,480kg, the Lexus LFA has a power to weight ratio of 373bhp per tonne, while specific output of 115bhp per litre is among the highest of any current supercar, aided by a high, 12:1 compression ratio, low friction internals and optimised intake and exhaust flow.

In spite of its potency, the V10 is an object lesson in compact and lightweight packaging, being about the same size as a regular V8 engine and weighing about as much as conventional V6. It is also as reliable and refined as any other Lexus power plan and exceeds Euro 5 emissions standards.

The engine was developed in conjunction with Yamaha through the established collaborative partnership between Toyota Motor Corporation and the Japanese specialist engineering company.

The formidable performance of the V10 is managed through an equally advanced transmission, a purpose-designed six-speed Automated Sequential Gearbox (ASG) that drives the rear wheels via a limited slip differential. To help achieve the optimum 48:52 front-to-rear weight distribution, it is contained in a transaxle mounted over the rear axle.

The ASG is operated by paddle shifts mounted on the steering column and is engineered for exceptionally fast shifts: an upshift can be effected in just 0.2 seconds.

The system has four driving modes: Auto, Sport, Normal and Wet, activated by a selector dial on the dashboard. Each mode has a specific gearshift programme, and engine and brake control logic systems to let the driver tailor the car's performance to suit driving conditions.

The Lexus LFA's acoustics, induction system and exhaust notes have been specially tuned to deliver an awesome "soundtrack" that expresses the car's extreme performance, both outside and inside the cabin. Referred to by the acoustic team as "Octave Harmony", it is inspired by the sound of a Formula 1 engine at full revs and is unlike that of any other road car, with different harmonic qualities created as the engine moves up towards its maximum 9,000rpm.

The Lexus LFA has one of the most advanced and powerful braking systems fitted to any production car, appropriate to meet the demands of its 200mph-plus performance capabilities.

The brake discs are made of Carbon Ceramic Material (CCM), which as well as being lighter than steel, gives fade-free performance in all conditions. The front discs are 390mm in diameter and 34mm thick, gripped by six-piston aluminium callipers; the rear discs measure 306mm across, are 28mm thick and are fitted with four-pot callipers. All use high-friction micron pads, manufactured exclusively for use with CCM brakes.

The track-tuned suspension is the result of intensive development work carried out by Lexus at the Nürburgring's Nordschleife circuit to give the best possible balance between control and comfort.

The bespoke wishbone front/multilink rear design makes extensive use of aluminium alloy for high strength and low weight, and the aluminium monotube dampers are the same as those Lexus used for its LFA race car in the Nurburgring 24-hour race.

The Lexus LFA boasts class-leading aerodynamics to achieve drivetrain cooling and superb high-speed handling and stability. Extensive wind tunnel testing helped produce a wind-cheating profile with a drag coefficient of 0.31, a remarkable achievement given the degree of downforce the car creates at high speed.

Airflow is precisely controlled over, under and around the car. A carbon fibre rear diffuser and flat underbody generate significant downforce, with an active rear wing, complete with a gurney flap on the leading edge, boosting the level further still.

The race-tuned steering gives outstanding response and feedback to create a perfect dynamic link between car and driver. The constant-rate rack and pinion system uses an innovative column-assist Electric Power Steering System that does not sap engine performance.

The large-diameter column shaft is mounted directly on the central chassis structure, giving the steering layout exceptional rigidity. The carbon fibre steering wheel has a flat bottom section and houses the engine starter button and instrument information selector switch. It can be adjusted for reach and rake.

Dictated by its front-mid engine layout, long wheelbase and short overhangs, sophisticated aerodynamics and low-slung cabin, the Lexus LFA's lines flow from roof to sill in a seamless convex to concave line. As well as its low weight and high strength, carbon fibre reinforced plastic (CFRP) also gave the designers more freedom to create shapes, curves and edges that would have been impossible with metal.

The styling remains true, however, to the principles of L-finesse, the design rationale behind all current Lexus models. Form follows function, as witnessed n the numerous air intakes and aerodynamic details, and even in the design of the door mirrors, shaped to channel air over the car's shoulders into the rear intakes.

The low-slung cabin is divided into three zones: the mechanical zone, which includes the skeleton of the car's construction; the human zone, with two seats placed right at the centre of the car; and the driving zone, with high-tech instrumentation that brings driver and machine together.

The cabin is hand-built, with driver-focused ergonomics. The seats, upholstered in fine leather and Alcantara, provide the high level of back and side support needed in a car capable of 200mph-plus performance. The trim echoes the advanced materials used in the Lexus LFA's construction, with exposed areas of both matt and gloss carbon fibre. Trim details are finished in brushed metal and the floor-hinged brake and throttle pedals are made of forged aluminium. As with the exterior finish, owners can choose different interior colours and details to suit personal taste.

The compact, hooded instrument panel combines an LCD display panel with a colour Thin Film Transistor (TFT) and a motor-drive movable ring. It features a single circular dial with a central tachometer with an LCD needle. When engine speed exceeds 9,000rpm, the display area turns red to prime the driver for an up-shift. It can also be programmed to turn yellow or green when the revs reach a user-selected range. The dial also houses a digital speedometer and gear indicator, transmission mode, vehicle control data and trip information displays.

An information selector switch on the left side of the steering wheel lets the driver toggle through a series of functions, including customising the data display, adjusting cabin illumination and operating a track-ready stopwatch system.

When the car is started, an instrument display sequence is triggered, creating a sense of occasion, culminating in the four digital dials showing oil and water temperatures, fuel level and oil pressure radiating out from the centre of the rev counter to take up their positions on either side of the central dial.

Passive and active safety provisions are in line with the Lexus LFA's exceptional performance. The central carbon fibre reinforced plastic central structure is extremely strong and provides excellent impact protection. Crash boxes are fitted front and rear that are designed to deform in a controlled fashion in the event of an impact. That at the front is made of CFRP; that at the rear from extruded aluminium. Side impact protection includes strong and rigid carbon fibre side members and door structures comprising an aluminium inner panel and a Glass fibre reinforced Sheet Moulding Compound (G-SMC) outer skin.

The Lexus LFA is equipped with Lexus's Vehicle Dynamic Integrated Management (VDIM) system, which co-ordinates the smooth operation of the ABS, vehicle stability and traction control systems as the vehicle approaches its performance limits, based on critical data on brake operation, yaw and roll rates, individual wheel speed and longitudinal, lateral and vertical acceleration

Passive safety features include two-stage adaptive front airbags and seatbelt airbags for driver and passenger and a driver's knee airbag.

The Lexus LFA programme was launched in 2000 as a straightforward R&D project, but gained impetus with the appointment of Haruhiko Tanahashi to lead a dedicated team of engineers, committed to a bespoke Lexus development programme. The first Lexus LFA prototype was completed in 2003 and a design study made its public debut at the 2005 Detroit motor show. In 2008 and 2009 the Lexus LFA was entered in the Nurburgring 24-hour race, the intention being to push the car hard under testing conditions prior to its official launch as a production-ready model at the 2009 Tokyo motor show.

The Lexus LFA will be hand-assembled at the Motomachi plant in Toyota City. Only 500 examples will be built, at a maximum rate of 20 per month to ensure the finest build quality and attention to detail. Each V10 engine will be assembled by a single engineer, and will bear his signature as testament to each Lexus LFA's bespoke status.

The UK launch price for the Lexus LFA is €368,000 (approximately £336,000). Owners can choose from an extensive range of options to personalise their car, including 30 different paint finishes. Certain items of standard equipment can also be removed, such as the audio system, to reduce the car's weight.