The LF-CC design concept provides an insight into the luxury marque's continued focus on leading-edge innovation and design.

"We went back to basics to restudy and develop our visual language, thereby setting this vehicle far away from its rivals in terms of exterior styling," Mr Tanabe said. 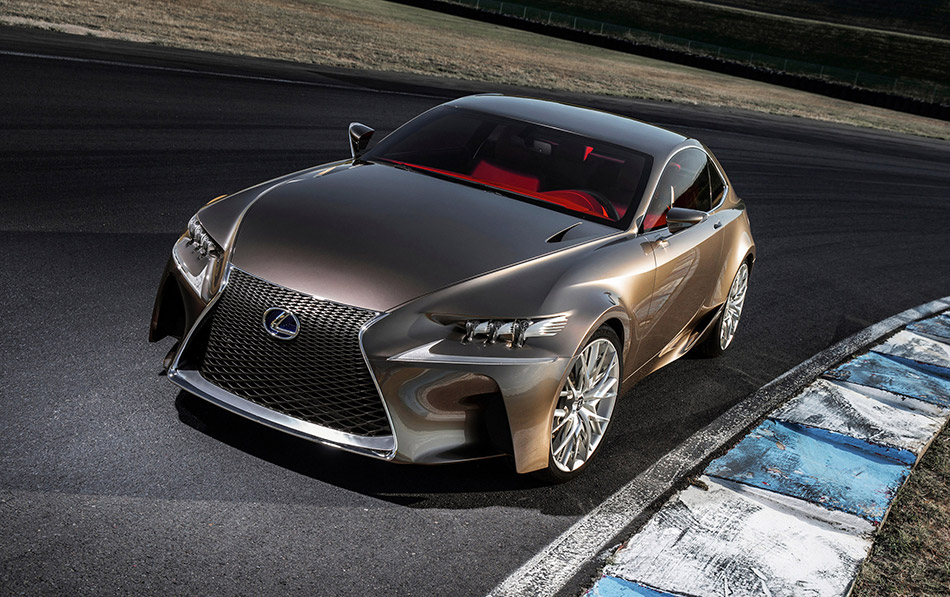 Although concept in design, the LF-CC provides much of the inspiration for the forthcoming, all-new IS Line and provides a hint of a future two-door mid-size coupe scheduled for production.

Lexus Australia chief executive Sean Hanley said that the LF-CC brings with it renewed focus on design and driving dynamics.

"The LF-CC signals a new Lexus, one buoyed by confidence and a desire to deliver vehicles that are visually and dynamically appealing," Mr Hanley said.

"LF-CC is more than a concept, it is a promise from Lexus to deliver an engaging and exciting two-door coupe - in fact, its impact is already evident in the forthcoming IS Line.

"The beauty of LF-CC is more than skin deep, with its innovative petrol-electric drivetrain and on-board features, the LF-CC and in fact the LF-LC coupe concept are graphic demonstrations of what's to come from Lexus," Mr Hanley said.

Under the skin, the LF-CC's powerful and efficient 2.5-litre hybrid drivetrain has also moved from concept to reality and will feature as one of three drivetrains across the all-new IS Line.

The 2.5-litre four cylinder Atkinson cycle hybrid powerplant in IS will feature D4-S (direct and port) injection, which boosts power delivery and efficiency.

Combined, the petrol-electric hybrid drivetrain will produce just 113 grams of CO2 per kilometre* while consuming just 4.9 litres of fuel per 100km* (combined cycle) with a combined power output of 164kW from its petrol-electric drivetrain.

The LF-CC continues to showcase the latest evolution of the company's unique L-finesse design language, with the boldest interpretation of Lexus' signature 'spindle' grille.

Framed by the bonnet lip, deep lower spoiler and powerfully projecting front guard tips, the grille mesh is encased in a deep, metal-finish surround and takes on a pronounced 3D form.

Three LED-projector headlamp designs are housed in a narrow gap between the lower and upper guard surfaces, without a conventional one-piece cover.

The broad lower guards are aerodynamically sculpted to manage the flow of air to the engine bay and front brakes.

In profile, the powerful convex curve of the bonnet flows through to a steeply raked windscreen into a roofline that deliberately peaks towards the rear of the cabin to emphasise the traction available from the vehicle's rear-wheel drive powertrain.

The bodywork is stretched tight between the front and rear guards, and the rear guard is less pronounced than that of the front, reinforcing the concentration of vehicle weight over the driven wheels for maximum traction.

Further developing a design form initiated on the LF-LC concept and the high-performance LFA, the sharply sculpted form of an airflow-regulating fin flows from underneath the side of the car and upwards through the rear wheel-arch.

This aerodynamic detail is designed to increase down-force over the driven wheels, further improving traction.

The fin merges with the falling roofline in a pronounced rear spoiler integrated within the boot lid, seamlessly fusing design and aerodynamic elements to give the vehicle its distinctive coupe proportions.

To the rear, the full-width bumper seamlessly joins the rear wheel arches to emphasise the LF-CC's broad, powerful stance.

The rear stop lamp is integrated into the shark antenna.

The LF-CC is finished in the new 'Fluid Titanium' exterior colour - a metallic finish with exceptionally high brilliance which combines sharp, bright highlighting with dark shaded surfaces to reinforce the powerful forms of the bodywork's sculpted surfaces.

The LF-CC's interior hints at the progressive luxury of a future Lexus model cabin layout, and represents a further development of the company's HMI (Human Machine Interface) design philosophy.

In a continued evolution of Lexus' interior design, the dashboard is divided into two distinct zones: an upper Display Zone, with a multi-display screen located at an ideal distance for at-a-glance viewing; and a lower Operation Zone, which allows access to the uniquely designed shift lever and an innovative touch tracer display for remote system control.

The clear division of zones creates a unique fusion of an airy, spacious cabin and a sporting cockpit which places the emphasis on a snug, highly focused driving environment.

The touch tracer display for remote system control is located directly behind the shift lever for maximum comfort and ease of operation.

The extensive use of metallic finishes and soft touch materials throughout reinforces the premium quality of the environment.

The contrast between the exterior and interior colour schemes gives the car an elegant yet simultaneously sporting image.