The Lotus Evora Type 124 Endurance Racecar has been developed from the award-winning Evora road car and is built to FIA regulations and safety standards.

The Type 124 (pronounced One Twenty Four) Endurance Racecar is the next step in the evolution of the Evora. The car will make its 24 hour racing debut at the ADAC Nьrburgring 24 Hours which provides a great test for the Evora's performance, efficiency and durability under tough and demanding endurance race conditions.

At the heart of the Lotus Evora are fundamental racecar elements: mid-engine layout, high-tech and super-stiff extruded and bonded aluminium chassis and very strong lightweight forged aluminium wishbones. All these elements mean that it is a natural evolution from the road going Lotus Evora to a competitive endurance racecar. 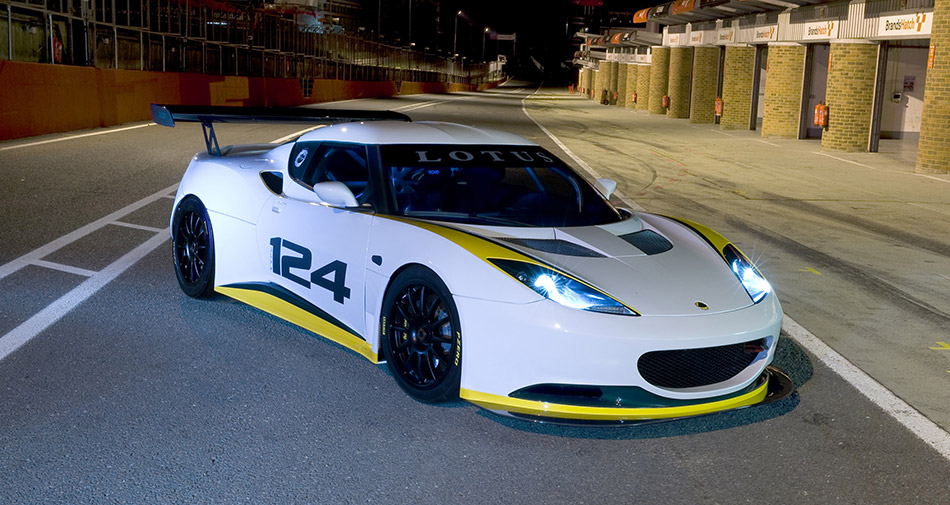 From the outset the design team had intentions to take the Evora racing and the chassis was designed with this in mind. Endurance races are the perfect events to showcase the efficiency, handling and durability characteristics that have been fundamental to the concept of the Evora.
The Lotus Evora Type 124 Endurance Racecar has a race-tuned version of the mid-mounted Toyota V6 engine, with power increased to over 400 ps (depending on race regulations). Vehicle mass is expected to be reduced by up to 200 kg, bringing the weight of the racecar to less than 1200 kg (depending on race regulations).

The racecar is fitted with AP Racing 6 piston callipers front and rear, with a race-tuned Bosch ABS system, 4-way adjustable dampers and adjustable anti-roll bars. The racecar runs on 18" rims shod with Pirelli racing slicks and the wheels widths have been increased over the roadcar to 9 Ѕ J on the front and 11 J on the rear.

The aerodynamically efficient Lotus Evora Type 124 Endurance Racecar body design, made from lightweight composite and carbon fibre panels, remains predominantly unchanged from the road car, with the only modifications being to the lower sections of the front and rear clamshells and the side sills.

Luke Bennett, Director of Lotus Cars Limited, said, "Motorsport has been in our blood ever since our founder, Colin Chapman, built the first Lotus back in 1948. We are proud of our motorsport history, which includes victories in Formula One, Le Mans, saloon car, rally car and sportscar racing around the world; more recently, we won the British GT3 Championship in 2006 with the Lotus Exige. The Lotus Evora Type 124 Endurance Racecar is from the same unique stable and we expect it to be a competitive racecar when we enter various endurance races next year."

Roger Becker, Vehicle Engineering Director for Group Lotus Plc said, "Every Lotus car is designed to be at home on the race track as well as the road, and the Evora is no different. Designed primarily as an everyday road car, the Evora's lightweight and stiff structure, its aerodynamics and performance means that it is perfectly suited to taming race tracks around the world, and we are looking forward to seeing the new Lotus Evora Type 124 Endurance Racecar line up on the grid for the 2010 season."

The racecar is expected to compete in a number of endurance races in 2010/ 2011 forming part of a factory-supported race program. The races that are targeted are: The 2010 ADAC Nьrburgring 24 Hours (Nьrburgring Nordschleife, Germany) in May 2010, Merdeka Millennium 12 Hours (Sepang, Malaysia) in August 2010, BritCar 24 Hours (Silverstone, UK) in October 2010 and the Dubai 24 Hours (Dubai Autodrome, UAE) January 2011.