With the HX1 concept car, which redefines the notions of expectation and emotion, Peugeot is again illustrating its ability to learn how to evolve and to reinvent itself constantly.

The specification for this prospective study is: to produce a vehicle for up to six people, while offering strong styling, that is sporty and efficient, giving unique driving sensations.

To achieve this, the HX1 transcends the notions of adaptability in all areas, with its extreme aerodynamics (the "flaps" are deployed to optimise aero efficiency according to vehicle speed), its tapered, low MPV architecture and its Hybrid4 powerplant integrating "plug-in" technology. 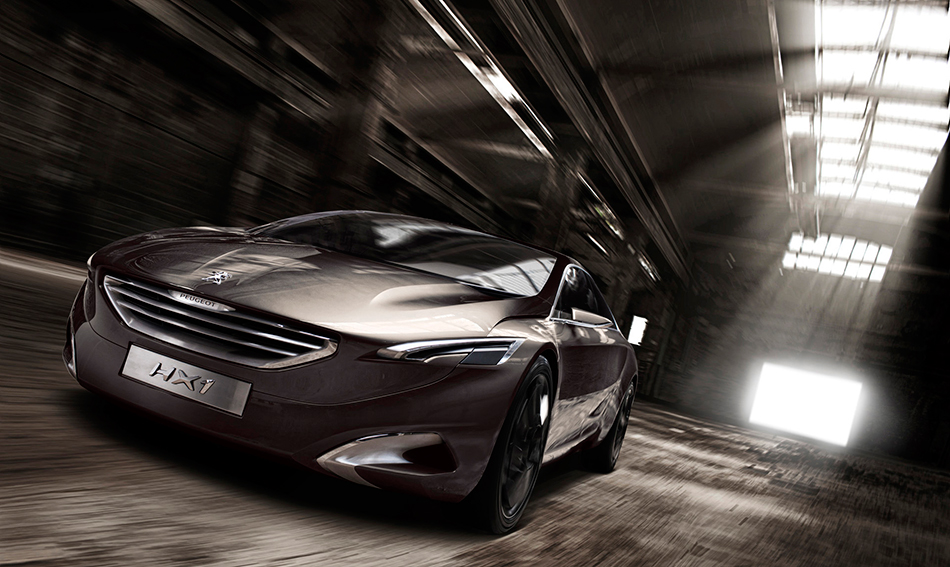 A UNIQUE AND TRANSFORMABLE CONCEPT, AIMING FOR MAXIMUM EFFICIENCY

The HX1 is a prospective concept, designed to help envisage future solutions in numerous fields: architecture, aerodynamics, modularity, equipment, interior materials and environment, not forgetting, of course, powerplants. These considerations have led to very strong biases which break from the norm and are guided by a theme: "Metamorphosis", to give the vehicle the capability to adapt itself to its environment, to life conditions, driving conditions, etc. and at any time.

This allows for a volume suited to pure, elegant and sleek lines, in accordance with an optimised Cd for maximum overall efficiency.

Four reverse-opening half-scissor doors can be opened wide, for ease of access to the HX1 passenger compartment. These kinematics have also been researched in terms of practicality and to allow accessibility under all circumstances.

The passenger compartment is structured so as to offer maximum comfort for the two passengers in the rear row and maximum sensation for the occupants of the first row. If necessary, two retractable seats can be configured in a centre row due to a clever system of "pull-out seats": based on the same principle used on the HR1 concept car (Paris Motor Show 2010), the additional seats are integrated behind the front seats.

The designers have carried out an extreme job on the car's aerodynamics. When stationary and at low speeds, the HX1's styling makes it appear sculpted from a solid form as the moving parts have been adapted to optimise air flow and to enhance the car's environmental performance. The seven vanes in each wheel rim spike, fashioned like a turbine, open to create a flat disc surface. At the same time, a spoiler and two side skirts located at the top of the tailgate are deployed above 100 km/h (62.1mph). When moving, the HX1 therefore adapts itself "physically" to its environment.

The vehicle has a Cd of 0.28; an outstanding value for a vehicle with an MPV silhouette.

All of these aerodynamic devices have evolved as a consequence of the free rein given to the immense creativity of the stylists.

STYLING NOT RESTRICTED BY NORMS

The HX1 is a vehicle that is pure in style; sculptured, upmarket and exuding dynamism and exclusivity. Aerodynamic, its sleek, elegant and fluid lines seem to have been tailored by the wind itself. They subtly underline the athletic, even muscular, character of the vehicle. Each surface is sculpted with precision, each detail is crafted intricately: mirrors with integral rear view cameras, brushed aluminium window surrounds, millimetre-perfect panel gaps and flush fittings, etc.
At the front, the HX1 bears and enhances Peugeot's latest design identity. The theme of a unique "floating" front grille, which appears detached from the bodywork, has been designed to harmonise with the car's tapered volumes. The precisely-carved feline head lamps give it an appearance that is evocative of the Marque's badge and history: the lion, proudly displayed on the front of the bonnet. This look is refined by an LED lighting signature,easily recognisable in the daytime or at night. This visual signature is also found in the rear lights, the boomerang shape of which follows the lines of the rear design.

The pure and futuristic design of the dashboard and seats, the materials used (floor and fittings in natural oak with inlaid fibre optics, brushed metal, leather, etc.), existing equipment (digital displays, touch-sensitive screens, etc.), designed lighting (LED spotlights, strips backlit by the natural lighting on the headlining, etc.); all of this contributes to create an environment where modernity meets refinement, natural materials meet technology, and so on. This all symbolises the Marque's vision of an upmarket, range-topping interior.

The front has been designed to provide the driver with maximum sensation. The environment is very sensory and high-tech, with its use of brushed metal and digital components. Here again, the vehicle will adapt itself in the real life situation of the driver. Indeed, the steering column can be moved backwards and forwards electrically in line with the seat adjustment for complete ease of access. The steering wheel movement loads up automatically when the car is put into "cruising" mode for enhanced driver stability and comfort. Finally, the central multifunctional display can be adjusted, leaving only the essential information visible on its edge.

The instrument panel is thus designed to create the experience of having complete control over the vehicle, like the "heads-up displays" which present all of the information to the driver without them having to take their eyes off the road ahead.

At the rear, maximum attention is dedicated to added value of its features and passenger comfort. The environment and the materials used are bright and natural, a mixture of folded and stitched leather. The two sculpted rear seats are reclinable, a set of controls are grouped in the centre armrest. The centre console includes a minibar and a coffee machine, a discreet acknowledgement to the extensive history of Peugeot products. This console is adorned with white Carrare marble, specially milled "by hand", which contributes to the exclusive and modern environment.

HYbrid4 "PLUG IN " POWERPLANT: EVEN BETTER SUITED TO ITS SURROUNDINGS

The concept car integrates HYbrid4 technology, an innovative modular architecture that figures in the Peugeot range on the 3008 HYbrid4, the first diesel hybrid in the world; technology which will also be present on the 508 RXH.

The principle behind HYbrid4 is clever yet simple: with an internal combustion diesel engine at the front (powering the front wheels) and an electric motor to the rear (powering the rear wheels), this technology enables all four wheels to be driven when the engine and motor work together, for increased safety and traction in extreme conditions. It also enables the vehicle to be driven at low speeds powered just by the electric motor in "Zero Emissions Vehicle" mode.

However, one of Peugeot's priorities is to maintain its position as environmental leader in the years to come. The HX1 therefore takes us one step further. It is equipped with "plug-in" functionality: the lithium-ion batteries can be recharged by ‘plugging in' the vehicle to a standard 240 V mains electric socket. This means that it can have a longer "ZEV" range, i.e.: it can cover up to 30 km (18.6 miles) in all-electric drive mode. The HX1 thus obtains a combined fuel consumption of just 3.2 litre/100 km with CO2 emissions of 83 g/km.

Peugeot, when creating its concept car HX1, teamed up with Pierre Hardy, creator of luxury shoes, to design an exclusive concept-shoe which would be aligned with appeal, modernity and a unique capacity for transformation.

In collaboration with the stylists from the Lion Marque, Pierre Hardy created shoes using materials, technology and quality of manufacture which echoed the interior of the vehicle. In the image of this concept car, the shoes adapt themselves to the life of their wearer: a slipper ideal for driving slides into a "high-heel" structure to become an elegant shoe for a more glamourous occasion.