The 2008 NHRA POWERade season will see the introduction of the Pontiac GXP in Pro Stock competition, and drag racing enthusiasts will get their first look of the new GXP in action at the third annual Pontiac Pro Stock Showdown at The Strip at Las Vegas Motor Speedway on Feb. 1 -2, and then a week later at the 48th annual CARQUEST Auto Parts Winternationals in Pomona, Calif., on Feb. 7-10. Designing and constructing the new GXP involved an enormous investment in time and resources on behalf of Pontiac and GM Racing, and the final racing product combines sleek, sporty, aerodynamic features that closely resemble the race car's Pontiac G6 GXP showroom counterpart.

Initial plans to design and build the new GXP began approximately 17 months ago when GM Racing Group Manager Dan Engel met with NHRA tech officials (Danny Gracia, Bob Blackwell and Don Taylor) at the 2006 Mac Tools U.S. Nationals in Indianapolis. A white Pontiac G6 was delivered to the grounds at O'Reilly Raceway Park by a local Indianapolis dealer, and the group from GM and NHRA began the process of marking and taping off key areas of the production car that would be crucial to the development of the new GXP Pro Stock Car, going over some basic styling features and getting a rough idea of just how the race car should look. With the long wheelbase and other inherent features of the production car, detailed planning, styling and designing a preliminary blueprint for the Pro Stock GXP were crucial. 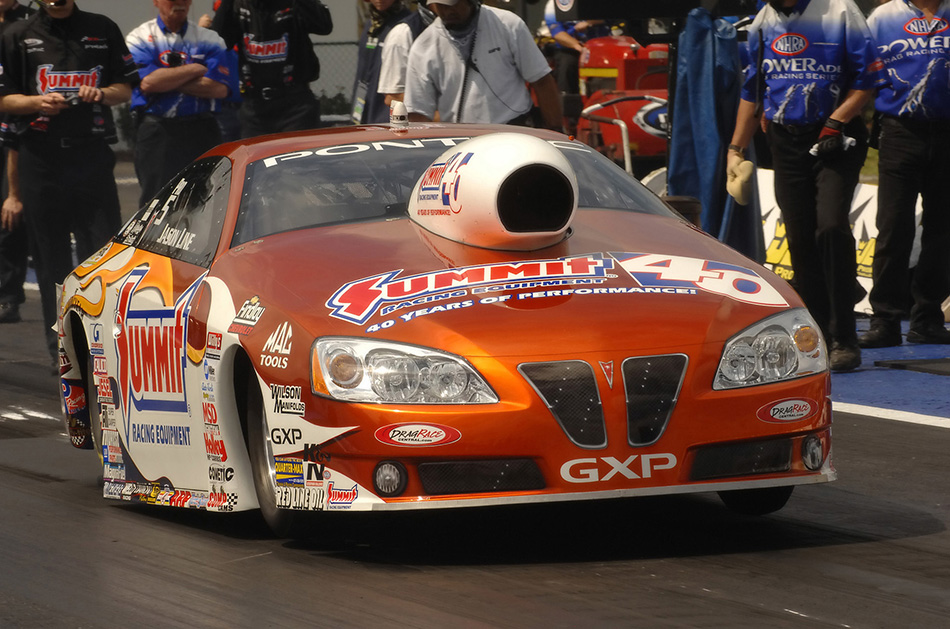 "Whenever we create a new race car we try to accomplish more than just introducing a new model," Engel said. "We also want to apply everything we've learned since building the older design so that we can keep moving forward, whether it's in the area of aerodynamics, strength of the body, safety, etc., and we also want the race car to closely resemble the production car. We've been fortunate to accomplish all of those objectives with the GXP.

"The rear axle is back quite a bit on the production car, and it's actually a pretty long wheelbase for the overall length of the car. We were somewhat concerned how it would look if we moved the axle forward, but it actually looks pretty good on the race car."

Following the preliminary design steps at the '06 U.S. Nationals, the GXP production coupe was then shipped to Don Ness Racecraft, just north of Minneapolis, where a "splash" of the car was taken and a mold built based on the body of the production car. From this splash, or fiberglass replica of the GXP production coupe, engineers then embarked on the long, arduous task of morphing the piece into a Pro Stock race car.

"The first thing we had to do was get the wheelbase at 105 inches by either moving the rear axle forward or backward," Engel said. "After we got the correct wheelbase, then we could get the main cab located to where it needed to be relative to the wheelbase.

"The second thing that was important was getting the 45-inch overhang from the centerline of the front axle to the nose. That's an NHRA spec, so we knew what to do. Once that was completed that told us where the engine and the firewall were going to be. The 45-inch overhang and where the engine has to be relative to the front axle dictates the location of the firewall and pretty much positions the cab for us."

With the body now roughly located on the front and rear axles, engineers began tweaking the mold and refining the shape of the new Pontiac Pro Stock car, cutting and bonding on pieces, smoothing edges, and cutting and bonding even more fiberglass until arriving at the correct shape. This new piece is referred to as the "plug."

"That's quite a bit of work," Engel explained, "Not only keeping the integrity of the shape of the production GXP, but also paying attention to how the new shape will affect the aerodynamics of the body while staying within the dimensions set forth by the NHRA. That alone took several months to complete."

While work was being done to complete the primary plug, the first chassis for the new GXP, one almost identical to the GTO, was also being constructed at Don Ness Racecraft. At the same time, additional work on the plug was finalized in preparation for the first of two wind-tunnel tests, and upon completion, the plug was shipped to the GM Aero Lab in Warren, Mich.

"In the wind tunnel, the plug has tires, a race engine to simulate the weight of the car, parachutes, headlamps, tail lamps, a hood scoop, and it has just about everything the race car would have," Engel explained. "We put a nose cone in the hood scoop so that we can get more consistent data from previous tests. During the second wind-tunnel test, we invite NHRA officials and that is when they give us the okay as far as how the body looks."

With the construction of the Chevy Cobalt back in 2004, the NHRA began implementing a minimum number of mandates for the construction of Pro Stock cars. These mandates covered such obvious areas as height of the car, width of the car, front overhang, and rear overhang, to name a few. Prior to the GXP's first wind-tunnel test, NHRA officials thoroughly measured the car to make sure it too complied with these regulations. When the first body was finished and mounted they went back and double-checked the race car to make sure it was the same dimensionally that is was prior to the first wind-tunnel test. A few changes to the car were made at the first wind-tunnel test with only slight adjustments made during the second test.

"Just as when we built the Cobalt and the GTO, the NHRA has been a part of this process from the very beginning," Engel said. "We have an excellent working relationship with the NHRA and they've been great to work on everything we've done with them."

Following the second test, the plug was transported to Roush Industries in nearby Livonia, Mich., where the Pro Stock molds were made that would be used to create the actual body panels. But before the molds could be made, a considerable amount of additional prep and finish work had to be completed to make sure the body was perfectly smooth and symmetrical from left side to right side. Coats of sealer and primer were then applied to the plug to get it ready for the construction of the first body-panel molds.

"Like the Cobalt, the GXP was designed without using CAD," Engel said, "and therefore, making it perfectly symmetrical was very, very challenging. There was a lot of prep work that needed to be done. When you do things in CAD, you can basically cut a line down the center of the car lengthwise, take either the right side or the left side, make a mirror image of it in CAD and put it on the other side of the car. That gives you a perfectly symmetrical car. But when you do it by hand, like we did with the Cobalt and the GXP, the only way to make sure it's symmetrical is by making templates and taking them from one side of the car to the other to make sure they're identical – and they have to be absolutely spot-on perfect.

"You can get into a situation where if the body isn't perfectly smooth, it won't look good coming out of the molds. Secondly, there's always an issue of getting the molds off when you first make them because you don't want the molds to stick to the plug. That's why you have to put layers of sealer and primer on it just to make sure the mold won't stick to it when you make the molds."

After the body panel molds were completed, Roush then created a GXP body that was shipped back to Don Ness Racecraft where it was mounted to a chassis.

"It used to be that when the chassis guys got the body there were lots of small pieces," Engel said. "There were front fenders and hoods and front fascia, but when we did the Cobalt we went to what we call a one-piece body. That's a little bit of a misnomer, it's not really one piece, but it's a lot fewer pieces than it used to be. We combined some of the pieces, for example the front clip, it's all one big piece as opposed to a hood, a front fender, a left front fender, a right front fender, and a fascia. Now it's just one piece which makes it easier to mount and work with the car."

Engel and NHRA tech officials then arrived at Ness' shop to inspect and measure the GXP to make sure it matched the dimensions of the body before it was shipped to Roush. The NHRA then checked the templates to make sure they fit the body perfectly and at this point a master set of templates were made. It is from this master set that chassis builders will make cars for their customers.

Pontiac Pro Stock competitors who will be racing the new GXP are excited about the prospects for the new race car and are looking forward to climbing behind the wheel of this new design.

"If you ask me, this new GXP looks pretty slick," said two-time NHRA champion Jim Yates. "It's an incredibly aerodynamic vehicle. Pontiac and the engineers at GM did a great job designing it, and we're excited about getting it on the racetrack and seeing what kind of number it will put on the board."

"We've had lot of success driving Pontiacs over the years," said three-time POWERade champion Greg Anderson. "Every time GM engineers come out with a new Pro Stock race car it's always a step ahead of the previous design, and the added benefit is that the race car closely resembles the G6 GXP that you see in your Pontiac showrooms. The new GXP is something to get excited about and we're pretty confident that NHRA Pro Stock fans are going to like it as well."