"The driver and not the technology should be the focal point of a car," observes the head of Rinspeed, Frank M. Rinderknecht (49), summing up the fundamental idea behind his latest concept car offering: the "Senso". Due to be presented jointly by the famous Swiss automotive design and solutions specialist, Rinspeed, and Bayer MaterialScience, one of the world's largest plastics producers, at the Geneva Motor Show from March 3-13, 2005, the innovative "Senso" was developed in cooperation with the experienced engineering specialist, Esoro. Johannes Seesing (51), who specializes in automotive applications at Bayer, says: "Together with our partners in the automotive industry, we are already carrying out research on the car of tomorrow. The "Senso" is an outstanding example of unconventional ideas and applied lateral thinking." 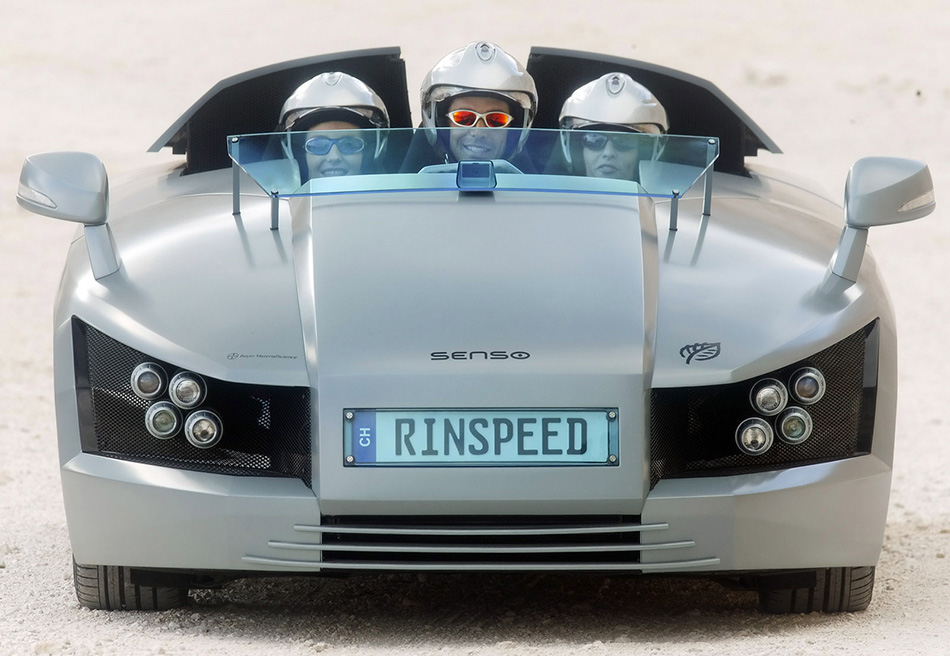 The "Senso", which runs on environmentally friendly natural gas, has, not without reason, been labeled the most sensuous car in the world. The "Senso" actually "senses" the driver by measuring his (or her) biometric data, and then exerts a positive effect on him with the help of patterns, colors, music and fragrances. A person who is relaxed and wide-awake simply drives better and more safely.

The whole project is based on an elaborate sensory system that forms the heart of the vehicle. It consists of a number of sensors that have the job of gathering data about the driver's condition. Firstly, there is a biometric Polar watch to measure the driver's pulse. A "Mobile Eye" camera records his driving behavior, in other words how well and how often he changes lane, and how close and at what speed he approaches the cars in front. Then - this, at any rate, is the vision - a HP board computer evaluates the data and establishes, with the aid of special algorithms, the driver's current state of mind.

The developers of the concept car speak, not surprisingly, of "Zen-sorial" – with reference to Far Eastern meditation. On the basis of the measured data, the driver now receives various impulses to his senses that put him in a state of relaxed attentiveness. The idea of 'communicating surfaces' stems from Andreas Fischer, a designer who developed the "zenMotion concept" at the Institute for Computer Sciences at the University of Zurich in close cooperation with the Institute for Psychology at the University of Innsbruck. The inspiration for the development came from studies by scientists dealing with the emotional effect of moving patterns on people. In the "Senso" – depending on the condition of the driver - four small Sharp LCD monitors emit stimulating (orange/yellow), relaxing (blue/violet) or neutral (green) color patterns into the driver's line of vision. They are integrated into the futuristically designed interior paneling, which lights up over the entire area and bathes the cockpit in dazzle-free ambient light.

It is all made possible by an innovative electroluminescent film technology developed by Bayer MaterialScience and the Swiss electronics specialist, Lumitec. This "smart surface technology" is celebrating its world premiere in the automotive industry. Johannes Seesing: "In the "Senso", we are showing what breathtaking possibilities this new technology can open up for car designers. The glowing material can be made into any shape and does not need electric bulbs or LEDs." The high-tech surface is computer-controlled and, depending on the applied voltage, shines green, blue or orange.

The optical stimuli are reinforced by especially composed sounds stored digitally on a computer. In addition to the eyes and ears, the nose is stimulated, too – by scents developed by the fragrances specialist, Voitino CWS, which flow into the car through the ventilators. Vanilla-mandarin has a calming effect, while citrus-grapefruit is more stimulating. Even the tactile senses are included: should the central computer establish any symptoms of tiredness in the driver, electric motors integrated in the seat will shake him awake by vibrating.

But the "Senso" not only has inner values. It would, after all, not be a Rinspeed if it did not have a radical - perhaps even controversial – design, too. In particular, the clear-cut, nononsense design of the interior puts the driver very much in the spotlight. The driver sits alone in the middle of the front row, flanked behind by two Recaro passenger seats covered with Italian designer fabrics from Xmobil. On the subject of design, the use of carbon parts in both the interior and the exterior gives the overall car a cool, technical look. The carbon components were custom-made by hand at MP Design. 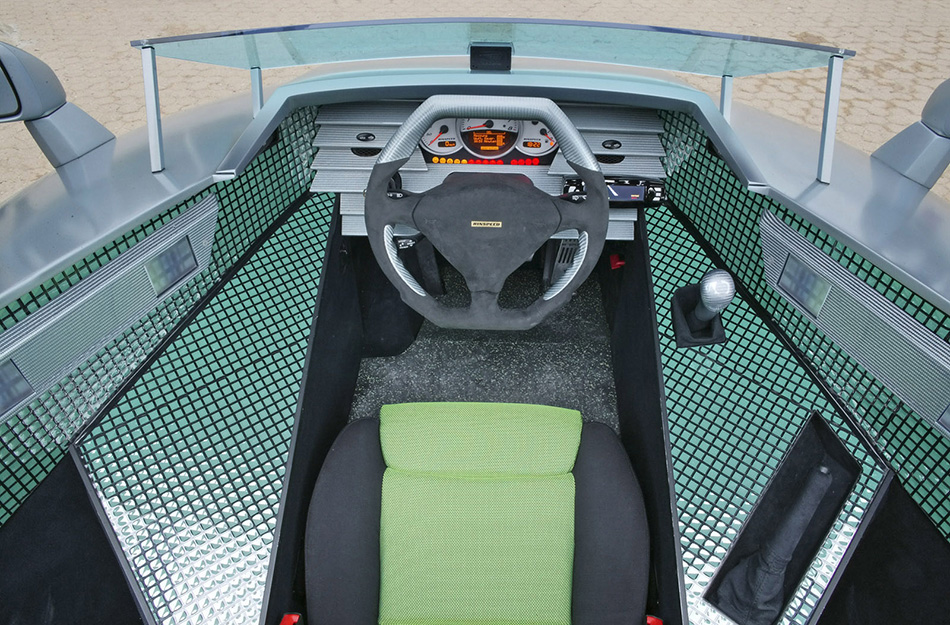 The exterior shape of the vehicle borrows from the world of architecture, structures man has created over the centuries. As such, it creates a tension-filled dynamic between moving and non-moving objects. The two-part structure of the rear end is reminiscent of bold roof constructions and deep chasms between ranks of skyscrapers. The interplay between smooth curves and sharp edges evokes attractive industrial architecture.

To produce these contours, the makers have used a number of high-tech materials such as the fully recyclable composite for the bodywork. The striking Speedster windscreen is made of high-grade Makrolon® polycarbonate - like the rear end, which is reminiscent of the modern facade of a high-rise building. The window has a scratchproof coating and weighs little more than half as much as a conventional car windscreen. It is also considerably more break-resistant, and opens up entirely new possibilities for car designers.

A breathtaking body such as this naturally needs to be clad in extravagant accessories that are not simply available off the peg: The eggshell matt special effect finish on the "Senso", which was produced using coating raw materials developed in Bayer's laboratories, is truly custom-made and only available this once for the Rinspeed "Senso". A soft-feel clear coat of the same shade in the interior additionally provides a pleasant, soft-feel surface.

The 1385 kg lightweight "Senso" is powered by a 3.2-liter boxer engine from the Porsche Boxster S, modified for its service in the "Senso" to run on gasoline and natural gas. As a result, emissions of harmful CO2 are reduced by as much as 30 percent. This is because natural gas is an extremely clean burning fuel, consisting almost entirely of methane with virtually no sulfur. The engine produces 250 bhp/184 kW at 6,200 rpm and has a maximum torque of 300 Nm at 4'600 rpm. A manual six-speed transmission transfers the power to the rear axle. The "Senso" accelerates from 0-100 kph in 5.9 seconds and has a top speed of 250 kph.

The futuristic body sits on a chassis specially developed by KW automotive. It can be adjusted in terms of both height and hardness. The chassis engineers have succeeded in performing the rare feat of attaining a perfect symbiosis between drive comfort and sporty handling.

The innovative lighting technology in the "Senso" was developed by the lighting specialist in.pro. The eight light units awaken associations with scenes from "Star Wars" - Captain Kirk would certainly have enjoyed it, too. The intelligent in.pro.Sat system sends automatically an emergency call via the GSM network in case of an accident, robbery or theft.

An optional FBI Bio Drive by Genesis Technology with integrated finger print recognition stores all personal data of the driver and allows an individual adjustment when starting the vehicle.