The new SEAT Leon is a powerful and emotional personality, and the most beautiful way to drive a functional car. The Leon has been completely redesigned from the ground up and is packed full of high-end technologies – in its driving assistance systems, in infotainment, in its chassis and drive. The engines combine powerful dynamics with outstanding efficiency. 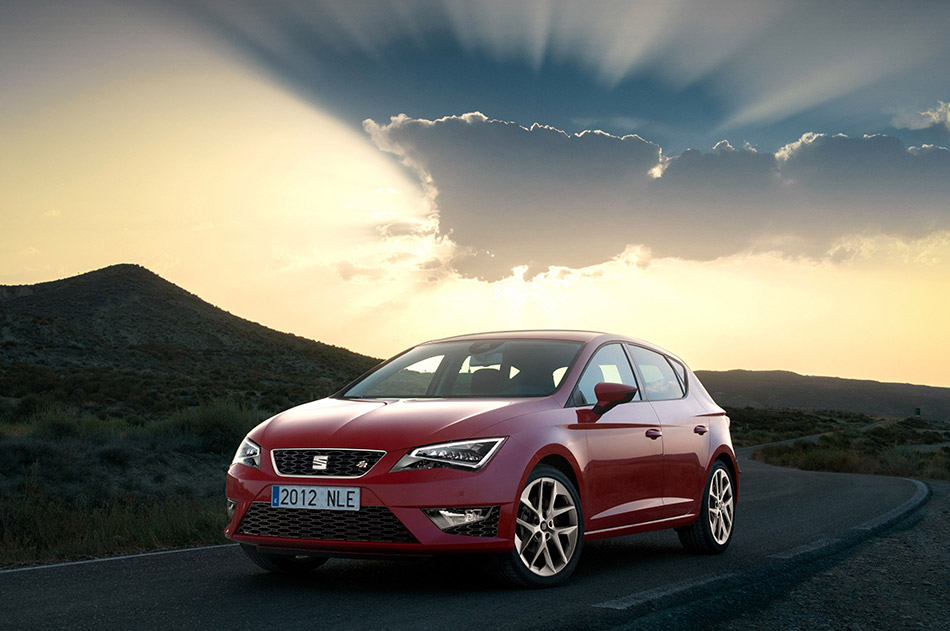 The availability of full-LED headlamps on the new Leon is a pioneering move by SEAT; being the first to offer this innovation in the mid-size segment. This technology combines stunning design with exceptional illumination.

The new Leon is also compelling for its excellent utility. It combines a more compact exterior with a more spacious interior. The premium materials and the level of craftsmanship place the Leon squarely at the forefront of the competitive field.

Every power unit is among best-in-class for efficiency and emissions. The highlight here is the Leon 1.6 TDI with start/stop system. It has an average fuel consumption of just 3.8 litres per 100 kilometres and an estimated CO2 figure of just 99 grams.

At 4.26 metres long, the new Leon is around five centimetres shorter than its predecessor, yet the wheelbase is up by almost six centimetres. This clever packaging enables short overhangs and enhances the strong visual presence of the wheels, while giving practical benefits such as improved interior space, particularly for rear seat passengers, as well as in the luggage compartment.

The angular line of the headlamps is a typical feature of the new SEAT design language, while also being perfectly integrated into the Leon's sculptural form. Full-LED lights are available for the first time in the compact class. The new headlamps give an unmistakable look to the front end of the Leon. Additionally, the new Leon now has a distinctive signature appearance thanks to the fitment of LED daytimerunning lights.

From the side, the new SEAT Leon looks like a precisely executed sculpture on wheels. The characteristic, unbroken "Línea Dinámica" runs rearwards over the wheel arches. It is reminiscent of the tension of a well-trained muscle. The trapezoidal C-pillars are characteristic to the Leon, as are the short, upwards-pointing third windows.

The rear end of the new SEAT Leon has been intensively modelled; the large logo serves as an opener for the rear hatch. The slightly wedge-shaped rear light clusters underscore the breadth and are also available in LED technology.

The elegant exterior design of the new Leon continues into the interior, which has a clear, light and uncluttered look. The dashboard is unconventional and elegant, with a two-tone design that makes it appear to float in mid-air. Fine details underscore the Leon's high standard of craftsmanship – details such as the large air vents, the controls for the air conditioning and the three-dimensional form of the trim elements. The luggage compartment has a volume of 380 litres, around 40 litres more than the preceding model. 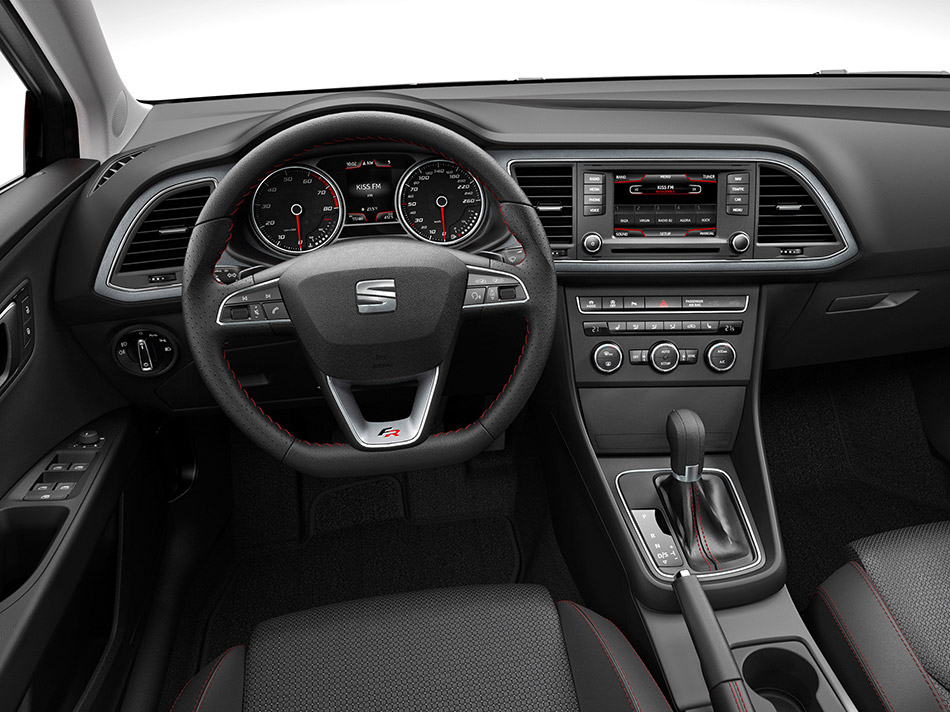 The new SEAT Leon uses a new vehicle architecture that enabled development engineers to position the front axle 40 millimetres farther forward. The results are a longer wheelbase and a balanced distribution of axle load – factors that significantly benefit comfort and sporty handling.

Thanks to advanced construction techniques and the use of lightweight materials in the body's manufacture, the overall weight has been reduced by 90 kilograms compared with the previous version.

EAT is sending the new Leon into battle with a series of powerful and fuel-efficient TDI and TSI engines ranging from 1.2 to 2.0 litres displacement. All engines feature direct injection and turbocharging; they have been engineered for low internal friction and fast warm-up. Compared with their respective predecessors, their fuel consumption is down by up to 22 percent.

Depending on the engine, transmission options range from five- and six-speed manual gearboxes or the renowned six- and seven-speed DSG dual-clutch gearboxes.

The chassis of the new SEAT Leon scores high for its sporty and agile character. Its front suspension features a MacPherson front axle with subframe, while the rear of the new SEAT Leon features torsion beam suspension for engines up to 110 kW (150 hp). The more powerful variants use a multi-link construction that handles longitudinal and transverse loads discretely.

The new SEAT Drive Profile for the Leon FR allows the driver to vary the characteristics of the power steering, throttle control and engine sound (FR versions only) via a sound actuator – in three modes, eco, comfort and sport. There is also an individual setting to tailor the settings according to the driver's preference.The interior ambient lighting can also be adapted, by switching the LEDs between white and red.

In the new Leon, SEAT offers a full range of up-to-date infotainment solutions. The basis is formed by the Easy Connect operating system, which controls the entertainment and communication functions, as well as a wide array of vehicle functions, via a touch-sensitive screen in the cockpit.

The entry level is the Media System Touch – the CD radio with a card slot and four speakers in the Reference line with a 5" screen. Style and the FR come with the Media System Colour with more in-screen colours and higher quality, and featuring a CD drive and six speakers as standard (eight speakers in the FR); it connects external devices via Bluetooth, USB or aux-in. Its 5-inch, colour touchscreen also controls vehicle functions.

The Media System Plus systems has a 5.8-inch touchscreen with three-dimensional graphics in high definition, an optional DAB tuner,and voice recognition. The system comes with eight speakers. The top solution incorporates the navigation system, which also shows navigation information in the colour display between the speedometer and rev counter. The SEAT audio system has a clear, crisp sound reproduction thanks to its 10-speaker and sub-woofer set-up.

The new Leon also sets benchmarks when it comes to the available driver assistance systems. The drowsiness detection feature recognizes when the driver is losing concentration and suggests taking a break. Additionally, an advanced camera mounted behind the rear-view mirror manages both the Full Beam Assistant, which switches automatically between full and dipped beam, and the lane-keeping assistant Heading Control which makes slight corrections to the electro-mechanical power steering to prevent the driver from crossing over lane markings.

nother all-new element of the Leon is the logo on its grille, rear and steering wheel. The Leon will be the first car to wear the company's newly refreshed signifier.

Sporting a cleaner, purer design, the new SEAT logo represents the precision and elegance of the brand's design language, while also reflecting the company's engineering and quality leadership. The introduction of the new SEAT logo across all of the company's visual material and locations will begin from Paris Motor Show in September.