Volkswagen has unveiled the all-new Passat at a ceremony at the Volkswagen Design Centre in Potsdam, Germany.  The latest car, which will receive its public premiere at the Paris Motor Show in October, is the eighth-generation of the Passat, which over the past 41 years has racked up over 23 million sales worldwide.

Everything in this car is new: its design, technologies and engines.  The Passat sets new standards with an unladen weight that has been reduced by up to 85 kg and fuel economy figures that have been improved by up to 20 per cent.  For the first time, there will also be a Passat with a plug-in hybrid drive system.  In its design and in the advanced features it offers, the new Passat bridges the gap between the upper medium and premium class.

Because of the optimised engine orientation, it was possible to lower significantly the bonnet and shift the windscreen towards the rear. This ‘cab backward design' helps to create the impression of a premium-class car.  Extremely precisely drawn edges and creases which develop individual light-reflecting surfaces help to continue this impression.  At the front, the new Passat's radiator grille features four chrome bars which bend inward towards the headlights in a trapezoidal shape. The lowermost chrome bar of the grille is continued into the headlights. 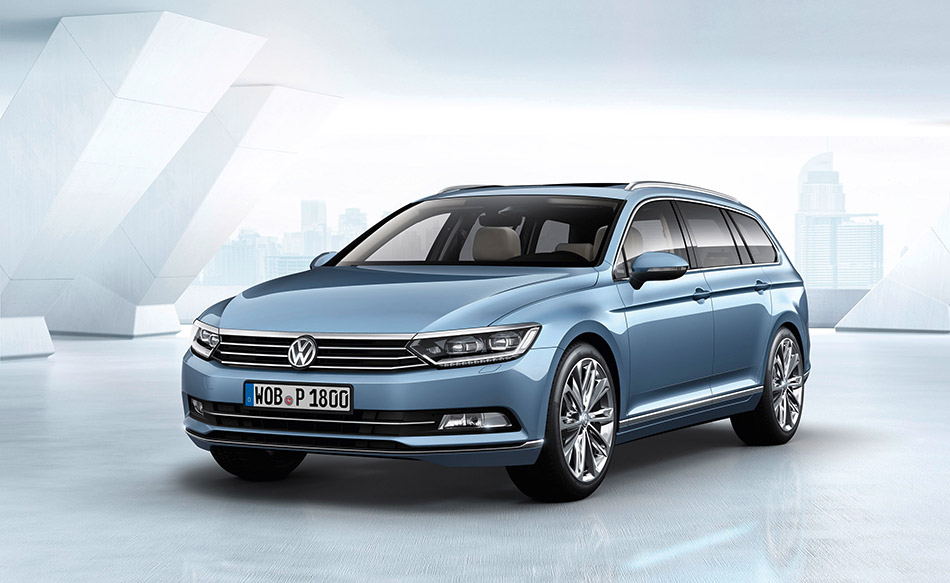 Immediately noticeable at the rear is that the cab has a strong inward sweep, and at the bottom it transitions into the wide, flared shoulder section.  The rear lights have been made considerably wider and leaner.  In this area, the Saloon looks like a young sibling of the Phaeton with its large bootlid surface, and a distinctive crease beneath the rear lights that extends across the rear.

All models of Passat have LED rear lights, while the higher-specification versions feature a distinctive horizontal tail light signature that switches over to a vertically oriented brake light signature under braking.  Headlights are halogen or LED.  In conjunction with Dynamic Light Assist, one of the two LED headlight options automatically adjusts the beam for maximum illumination of the road without dazzling other traffic.

Despite exterior dimensions that are actually marginally smaller than those of the previous Passat, interior space is improved, with more leg- and head-room, as well as increased luggage space.

The interior has been developed to match the sophisticated exterior of the eighth-generation Passat.  New technologies to be offered on the new Passat include the optional Active Info Display, which replaces the instrument cluster with a fully configurable interactive 12.3-inch TFT display; a heads-up display; the latest Modular Infotainment System, including the Car-Net remote app; a further-developed 360-degree Area View function; and the latest generation of Park Assist.  This newly developed Park Assist includes the option for the car to park itself forwards into perpendicular spaces – useful, for example at supermarket car parks, where access to the boot is important.  It also includes a world-first Trailer Assist system, which provides assistance when reversing a vehicle with a trailer attached – without the need for any modification or adaptation of the trailer.

Safety technology includes Side Assist with Rear Traffic Alert; Traffic Jam Assist which makes stop-and-go driving more comfortable; Emergency Assist, which can potentially halt a vehicle when the driver is incapacitated; and the latest Front Assist system with City Emergency Braking, which optionally combines both radar and camera sensors to add pedestrian detection.

A highlight of the Passat's new range of engines is a high-performance, four-cylinder, 2.0-litre, bi-turbo diesel delivering 240 PS and an extraordinary 500 Nm from 1,750 rpm.  This engine will be available only with a new seven-speed DSG gearbox and 4MOTION all-wheel drive.  A plug-in hybrid model will also be offered, with potential to travel 31 miles on battery power alone, and with a maximum range of around 600 miles.

Further details and UK pricing are expected to be announced at the time of the Paris Motor Show in October.  UK sales will start before the end of the year, with first deliveries expected in early 2015.