After more than ten years without a six-cylinder model to offer customers, it was time in August 1968 for Volvo to unveil its 1969 model range which included a new large car for the more prestige- and luxury-oriented segments. The model was called the 164, with the figure "6" in the middle denoting that unlike the cars in the 140 Series, this model featured a six-cylinder engine.

"The Volvo 164 - a stylish, high-specification car with features that include a new in-line six, an elegant and comfortable interior and a variety of other properties that place this model securely among the big names in what is for Volvo a new price class. The 164 is an all-new, exclusive car that in a natural and substantial way complements the Volvo Amazon (P120) and Volvo 142/144 models, representing an attractive and successful expansion of Volvo's model range."

This was how the new car was described in an in-house information pack just ahead of its launch in mid-August 1968. The material was written almost like a press release and it is therefore both easy and tempting to quote from it. 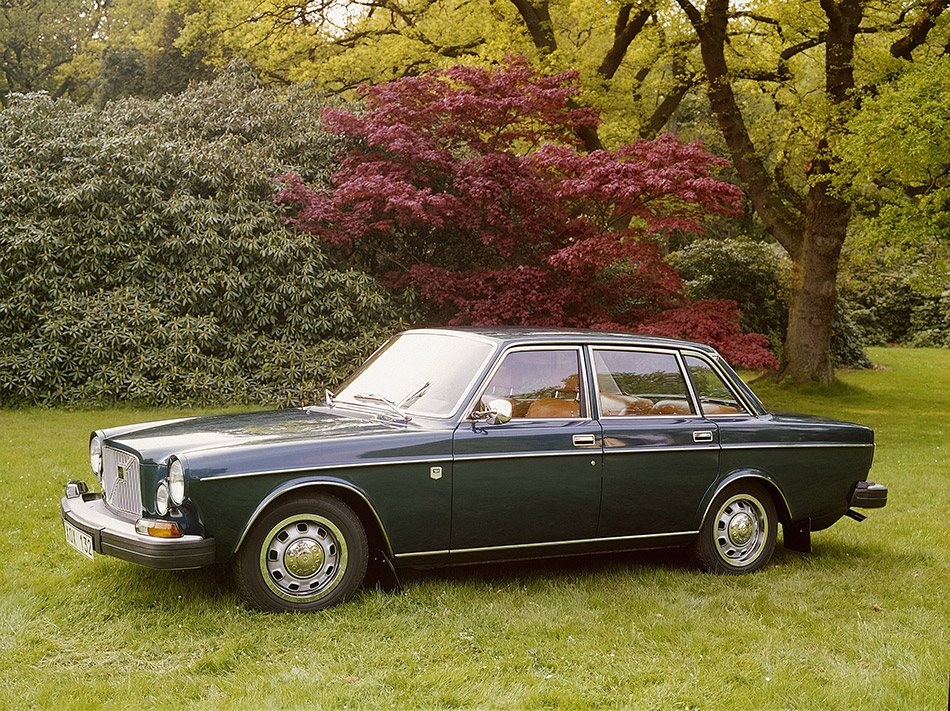 When Volvo stopped production of the PV830 in 1957, this also marked the end of six-cylinder engines in the company's car programme. The B16, B18 and B20 engines of various types and with various outputs provided the power for the entire car range between 1957 and 1968. Many people remembered with a sense of loss the large, powerful, silent Volvo sixes that were virtually everlasting, and the comfortable and spacious cars in which they were installed. For this reason, soon after the PV830 stopped production a new project was started up, project 358, whose aim was to develop a more modern replacement equipped with the V8 engine that was fitted to the Philip prototype and that, designated the B36, was also installed in the light Volvo Snabbe (Speedy) truck.

Plans for introduction of the V8 were soon abandoned and a decision was instead taken to introduce an in-line six with a displacement of 2.7 litres and with potential for enlargement to 3 litres. The engine project was never subjected to short lead times, but when the B30 engine (3 litres) was finally presented, Volvo proudly wrote:

"Volvo's engineers always work with an eye on the future and behind this new engine lie thousands of hours of engineering and testing, excellent experience from previous Volvo engines, and the utilisation of the very latest innovations in engine technology. The B30 engine is built along the same basic lines as the already so well-known and renowned B18 engine, and it has all the engineering advantages and features that have given the smaller engine its worldwide reputation for reliability and durability."

And that's exactly the way it was. The in-line six is an ideal engine configuration -fully counterbalanced and with a highly efficient construction featuring one cold and one hot side, it is smooth and quiet in operation. When it comes to the combination of smoothness, torque and effortless and high-speed capability over a sustained period of time, there are few engine types that can match the in-line six.

First off the mark with exhaust control

The B30 had the same interior dimensions as the B20: 88.9 x 80 mm for bore and stroke respectively. In other words, it was a kind of modular engine even before the term was coined, an approach that was further accentuated with interchangeable valves, pistons and conrods between the B18, B20 and B30 engines.

The power output, torque and engine character of the B30 were on a par with those of other 3-litre sixes, but in one area Volvo was way ahead of all the competition:

"With its 1969 car engines, Volvo is once again making pioneering inroads in the car world - exhaust filtration is being fitted as standard. The principle is simple: through a number of measures on the carburettor side and the inlet system, the result is more complete combustion at low revs compared with corresponding engine types."

These special measures included thermostat control of the carburettors, which kept the fuel mix at a constant temperature irrespective of ambient conditions, and an extra valve in the inlet manifold which induced a pronounced swirling motion and led the mix to pre-vaporisation. The result was exhaust gases with low levels of both carbon monoxide and hydrocarbons. When driving at higher revs, the valves were opened and the mixture could pass directly on into the engine without pre-vaporisation since combustion was already sufficiently efficient.

The 164 was available from the start with a choice of three transmission alternatives: manual 4-speed or 4-speed with overdrive, and 3-speed automatic. The manual gearboxes had a relatively short floor-mounted gear lever between the front seats, but the 164 could also be specified with a front bench seat and steering-column gear lever. Cars with automatic transmission came only with a column-mounted gear selector.

The Volvo 164 had a 270 cm wheelbase, 10 cm more than the rest of the model range, creating more space for the long engine and also adding more legroom in the rear. Otherwise the 164's lines were in principle the same as in the 144, with one marked difference: the front and bonnet. The fact that the grille is upright and almost square - with a clear nod to luxury-car manufacturers based in Crewe and Stuttgart - is strangely enough not even mentioned in the information material. Nor is there any mention of the fact that the iron mark held by the diagonal bar made a comeback on the front of a Volvo car after an absence of more than 20 years.

The most powerful Volvo engine ever

The nice woollen cloth upholstery on the seats and door sides created an exclusive aura but unfortunately was not very durable. Leather upholstery became standard after just one year, with velour available as an option. Like the rest of the Volvo range, the 164 underwent a range of technical and cosmetic changes as development proceeded apace. What was perhaps most significant for this model was the introduction in autumn 1971 of the 164E with fuel injection: the B30E with its 175 hp SAE was at that time the most powerful car engine ever in a Volvo.

The B30 engine also found its way into a couple of other cars. For one thing it powered Zagato's beautifully sculpted 3000 GTZ design study, but it was also used in series production in Britain's Marcos 3-Litre sports car, which was also offered in 1800 cc guise with the Volvo B18 engine.

In autumn 1974 the Volvo 164 was replaced by the newly developed and logically named Volvo 264 powered by the PRV-developed V6 engine that stayed with various incarnations of Volvo's flagship model until autumn 1990, when an in-line six - all-new and built entirely of aluminium - once again powered Volvo's top model, the 960.