Drawing inspiration from the new Audi A3 Saloon with its flowing lines and finely balanced proportions, the all-new A3 Cabriolet makes its world public debut at the 2013 Frankfurt Motor Show. The compact class open-top will become available for UK ordering in late October, and will reach its first customers here in March 2014.

To achieve its sleeker profile and provide the capacity for complete soft-top concealment when in open mode, the new compact class cabriolet has grown compared to the previous model: its length has increased from 4.24 to 4.42 metres, its wheelbase from 2.58 to 2.60 metres and its width from 1.77 to 1.79 metres. Only its height (1.41 metres) is down on its predecessor, by 15 millimetres. Luggage capacity has also grown by 60 litres (2.12 cubic ft), and access to that space has been improved. 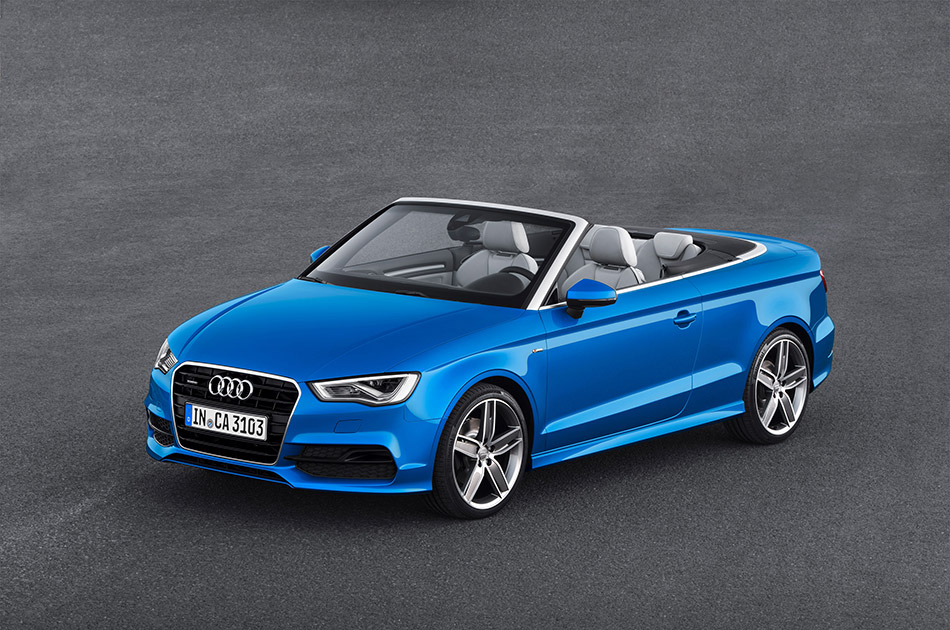 The front of the Audi A3 Cabriolet is characterised by the single frame radiator grille, which is flanked by flat headlamps that can light the way using either halogen or xenon bulbs depending on version, or using optional LED headlamp technology.

The rear overhang plays a key role in the harmonious proportions of the two-door car. The windscreen frame is made of aluminium – and an aluminum-look trim strip runs around the roof aperture. On the flanks, the design features a taut tornado line and contoured surfaces that take full advantage of light and shadow.

The new A3 Cabriolet has a soft fabric roof that is stretched over a lightweight kinematic mechanism made of magnesium-steel, and it complements the car's design perfectly. At the press of a button, the top opens or closes electro-hydraulically in less than 18 seconds at speeds of up to 31mph. When retracted, the top – folded into three layers – rests in a tray that barely affects luggage capacity, which is 287 litres (10.14 cubic ft).

The acoustic soft top has a glass rear window and is available in black, grey and brown - its roof liner can be specified in black or lunar silver. The fully automatic acoustic hood has a thicker inner foam layer which further reduces the already low interior noise level of the A3 Cabriolet. A wind deflector and head-level heating for the front seats will be available from the options list. An active rollover protection system consisting of two spring-loaded plates that are recessed into the body protects the occupants in case of a rollover accident.

The new Audi A3 Cabriolet is around 50 kilograms lighter than the previous model despite its larger size and improved comfort – the kerb weight of the entry-level version is just 1,365 kilograms. Even taking into account its special reinforcements, which deliver high torsional rigidity, the body-in-white with its aluminium bonnet weighs 30 kilograms less than previously. Weight was also significantly reduced in the interior and in the engines, contributing to best-in-class figures which bear testament to the Vorsprung durch Technik brand's intensity of focus on lightweight construction principles.

Elegant lines, clean surfaces and typically uncompromising quality also mark out the interior design of the new Audi A3 Cabriolet. The instrument panel is lean and low, with a gently curved frontal section and a centre console angled slightly towards the driver. The large, round air vents with their ‘jet design', the electrically retractable 5.8-inch colour monitor complemented by the Driver's Information System with efficiency and rest recommendation assistants, the control panel for the air conditioning system and the three-dimensional trim strips help to maximise the air of premium class sophistication. So, too, do features such as the optional lighting package which for the first time includes a touch-sensitive switch for the reading lights. 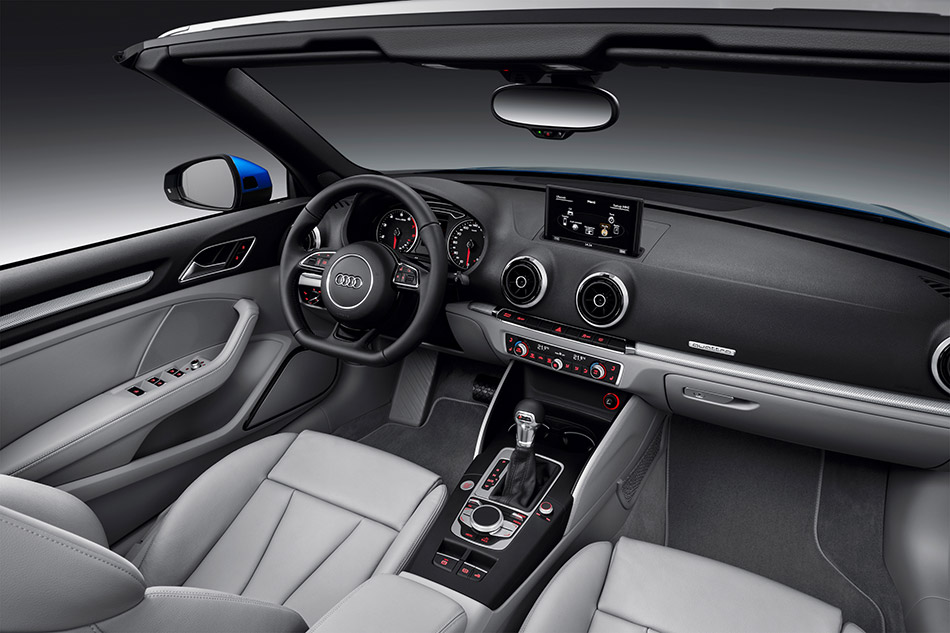 The cabin offers enough space for four adults, and the seatbacks of the two rear seats can be folded down to create a wide through-load area. The steering wheel and seats are new designs, and the new electro-mechanical parking brake is operated by a button on the centre console. Depending on which of the three trim levels – SE, Sport and S line – is chosen by UK customers, the seats are finished in either cloth or a combination of cloth and leather, with full leather and an Alcantara/leather mix available on the options list.

Also extremely attractive is the line-up of infotainment components, which is headed by the Bang & Olufsen sound system and MMI Navigation plus. The latter combines an ultra-slim seven-inch monitor with a user terminal incorporating a rotary/push button control that is designed as a touchwheel to accommodate the MMI touch function – the touchwheel's top surface is a touch-sensitive pad for inputting alpha and numeric characters.

To build on this, customers can also specify the Audi connect option, which allows occupants to more fully exploit the A3's highly advanced computing potential by connecting it to the Internet, whenever possible via the fast 4G/LTE transmission standard (available from November). The integrated WLAN hotspot enables passengers to use their mobile devices to surf and e-mail freely, and by going online the car can also offer everything from navigation with Google Earth images and Google Street View to online traffic information and tailored social media access. The most recent addition to the lengthy list of valuable Audi connect features is a parking information function, which shows available parking spaces in public car parks.

Three newly developed engines will be offered in the Audi A3 Cabriolet at its launch, all placing the emphasis as much on performance as on efficiency. The two TFSI engines produce 140PS and 180PS from 1.4 and 1.8 litres of engine displacement, respectively, while the 2.0 TDI develops 150PS; other engines will follow – ranging from the 1.6 TDI with 110PS to the 2.0 TFSI, which will power the Audi S3 Cabriolet with 300PS. All engines in the new Audi A3 Cabriolet employ direct injection and turbocharging and are backed up by a start-stop-system.

On average, the three launch engines bring a fuel economy improvement of around 12 per cent compared with their closest equivalents in the previous A3 Cabriolet range, despite also making performance gains. The 1.4 TFSI with six-speed manual transmission, for example, powers the new car from 0 to 62mph in 9.1 seconds, yet also achieves a very healthy 56.5 mpg with CO2 emissions of 114 g/km. Also contributing to this efficiency is Audi cylinder on demand (COD) technology, which deactivates two of the engine's cylinders in low load conditions.

The 1.8-litre TFSI is also a state-of-the art unit with an extensive package of high-end technologies, including dual injection into the combustion chambers and induction manifold. It is initially linked exclusively to a seven-speed S tronic twin-clutch transmission, and where the Audi drive select vehicle dynamics system is fitted, it offers a free-wheeling function that further improves fuel economy. According to the combined cycle test it is capable of returning up to 48.7 mpg with CO2 emissions of 133g/km.

Not surprisingly the manual transmission-equipped 2.0 TDI with 150PS remains the economy champion in the first phase of engines, offering combined fuel consumption of 67.3 mpg and CO2 emissions of 110g/km.

The chassis of the new Audi A3 Cabriolet takes the much praised set-up employed by the rest of the A3 range as its technical basis. The MacPherson strut front and four-link rear setup includes lightweight aluminium elements, and the multi-link rear configuration is able to handle longitudinal and transverse forces separately. As with all other A3 models, Cabriolet models will offer a no-cost choice between comfort-oriented standard suspension and tauter sports suspension lowered by 15mm. S line versions will offer three choices – standard suspension, sports suspension and even more focused S line sports suspension lowered by a further 10mm over the sports set-up.

The power steering system features an efficient electromechanical drive, and to ensure that handling remains assured and safe but also adjustable right to the cornering limits the ESC stabilisation control system integrates an electronic limited slip differential. In support of this, powerful and durable brakes sit behind wheels ranging in size from 16 to 19 inches.

To tailor the A3 Cabriolet driving experience more completely to the preferences of the driver, the Audi drive select vehicle dynamics system will also be offered. It features a choice of modes governing the operating characteristics of the engine management, power steering, S tronic transmission and air conditioning. This control also extends to optional systems such as the adaptive suspension control system Audi magnetic ride, adaptive cruise control, adaptive light and progressive steering whose steering gear ratio becomes increasingly more direct when turning.

The first ever S3 Cabriolet will follow shortly after the initial launch. Its 2.0 TFSI engine will deliver 300PS and transfer 380 Nm (280.27 lb-ft) of torque to the crankshaft. Equipped as standard with the six-speed S tronic transmission, it will be capable of completing the sprint from 0 to 62mph in 5.4 seconds, yet will also offer the potential to cover up to 39.8mpg.

The strikingly styled body with its trademark S quattro styling elements will sit 25mm lower than the standard car on S specific sports suspension, which will be complemented by quattro all-wheel-drive via an electronically-controlled hydraulic multi-plate coupling, and by the new progressive steering system with its more direct and progressive response.