Design
The design, sharp in every aspect, is in the style of an animal about to jump. This combined with the outstanding functional solutions indicates a view to the future of the Brand and possible commitments in the sports car segment. The basis for the highly dynamic exterior design forms a very clear linear structure, which distinguishes all of today's Volkswagens. But these lines are set sharper than ever and, with a new appearance, frame extremely exciting and well formed surfaces. This new three dimensionality in the important body elements forms a path to tomorrow's world. 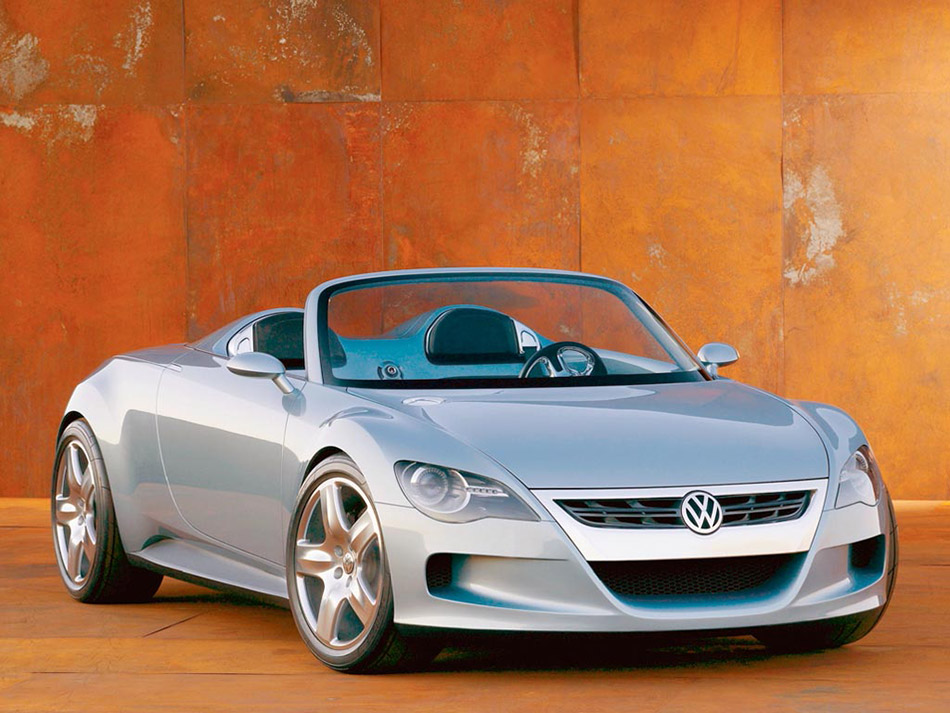 Design dimensions
The concept R is 4.16 metres long, 1.78 metres wide and 1.25 metres high; The body and interior conquer virgin territory in terms of style at this level. Chosen consciously to provide a contrast, the designers applied colour to the exterior and interior: Frozen sky paint finish, dark earth interior leather.

Dynamic propulsion
Propulsion for the concept R comes from a V6 mid-engine; It returns 195 kW / 265 brake horse power and accelerates the roadster in 5.3 seconds to 100 km/h. Top speed: 250 km/h (governed; capable in theory of 270 km/h). The sound of the engine can be varied at the turn of a switch! The maximum 350 Newton metres of torque provided by the V6 are transferred to the road via the spectacular Volkswagen direct selection gearbox (DSG / 6-speed) and rear axle.
Front end design

Radiator grille design
A particularly avante garde appearance of the concept R is evident in the front end with its newly created radiator grille. The chrome badge is also an opening through which the V6 engine breathes and the new look of the eye-like headlights form a face that maintains the Brand tradition whilst also reinterpreting the design.

Headlight design
The headlights have a dominant form with their outer, round main element and an inner part that leans diagonally towards the centre of the vehicle. Inline with the Phaeton, Touareg and new Golf, the wing area is extended prominently to the front above the headlights like an eyebrow and underlines in this way the athletic character of the concept vehicle.

Innovation
A lens begins to open as soon as they are switched on. Until this aperture widens, all that can be seen is a narrow beam of light. The optical effect of this focussing of the "vehicle eyes" makes the "concept R" appear to come alive, inline with the whole characteristic design.
Side design

Silhouette of fascination
The flank of the concept R is distinguished by: a very flat waistline, rising to the centre of the rear wheelarches; naturally round, heavily contoured wheelarches; and a very short rear overhang. The three dimensional effect of the rear end design is expressed par excellence.
Rear end design

Rear end design
The rear is absolutely muscle packed. Inline with the front end, the boot forms a V, enhanced by a dynamic edge unlike anything else.

Tail light design
The tail lights correspond in their form (round main element, angled inner part) with the headlights.

Tail light technology
The tail lights build up their lighting power in three stages as three LED blocks are activated one after the other.

Body dome
The dynamics of the concept R are underlined by two body domes behind the driver and co-driver in the style of a classic racing car. Not only are they powerful and elegant in their flowing lines, but they also fulfil two very practical roles: Wind deflection and over-roll protection.

Interior concept
An interior was developed for the concept R that, with its layout, operating and information spectrum, forms a path to the future, like the function of a time tunnel. All information and operating elements are integrated with a new harmony in form and function.

Pulsating VW logo
A so-called OLED screen (flexible in shape and form with extremely high lighting power) breathes even more "life" into the concept R. And in a way that is as unusual as it is unexpected. The VW emblem in the steering wheel is no longer a tangible reality; it can now be found stored in the round display. As soon as the driver switches on the ignition, that is, when the concept R is switched to stand-by, the VW emblem begins to pulsate.

Seating concept
The bucket seats of the concept R do not have an adjustment feature. In fact, there is no way of adjusting them at all. Instead of the seat, the driver moves the polished metal operating and information block of the instrument panel, including steering wheel and pedal cluster, back or forth. The adjusting mechanism is activated electrically. At the press of a button, the co-driver can also find an optimal seating position by moving a highly polished support element back or forth in the footwell.

Seating comfort
A new carrier mechanism means that the seats are self sprung; The degree of hardness in the springs can be adjusted. The seating comfort is enhanced even further by active foam used in the seat structure, which is covered in deer leather. This foam is used for the first time in sports car seats. It adapts to the body contour perfectly like a modulated counterpart.

Instruments / centre console
A highlight of the concept vehicle is the instrument panel and centre console. All areas of the operating elements and displays and also parts of the steering wheel (self-climatised) are finished in polished aluminium. The instrument panel cross member is covered in dark leather. The cockpit captivates its audience by clarity, aesthetics and functional logic. Example: The air vents in the centre console, designed with a turbine appearance, display the selected temperature digitally and can be turned like a dial to set a new value. Navigation, audio system, running gear and cellphone are controlled via an MMI (multimedia interface) on the centre tunnel.

Instruments
A further novelty are the instruments themselves. Example, main instrument: When the ignition is activated (no key required, just simply tap the START switch lightly), it opens up into the centre of the cockpit from the right. As soon as the driver activates the navigation system, the main instrument is drawn back into the instrument panel, which clears the way for the navigation display. All other information is now in the background.