Chiptrick is stepping it up: About one year ago after the turbo specialists from Wuppertal presented their performance treatment of the "small" Audi R8 with 4.2 liter V8 driving gear, the aspiring Chiptrick crew is now taking off under the new label K.MAN, with its own brand that is now assuming all variations of the sports car from Ingolstadt with the scorpion identity. It is therefore no coincidence that K.MAN – which is a playful short form of the family name of the brothers René and Jean-Pierre Kassmann – also uses the armored arthropod with the impressive scissors as a "heraldic animal".

The fact that the absolutely luscious performance of the "big" R8 V10 fast car (525 HP) is hardly able to meet the insatiable hunger of the highly demanding sports car clientele is underscored by the versions – R8 V10 plus (550 PS) and R8 GT (560 PS) – that have been "re-sharpened" ex-works. Not least from this point of view, K.MAN is now taking the snappy biturbo big-three on Audi R8 basis to the starting grid: With GTK (590 HP), GTK S (640 HP) and GTK RS (750 HP), K.MAN is sending three double-charged rivals into the race against the free-sucking V10 models of the R8. Based on the paper form, they clearly have the leadership edge: Since all three models are based on the lighter eight cylinder model, a process of complicated weight reduction could be waived, since the GTK (1.680 kg) weighs a good 40 kg less than the V10 and only 10 kg more than the V10 plus. Combined with its performance advantage, the consequence is that the three K.MAN bolides enormously overshadow their (serial) V10 brothers also in terms of performance weight: GTK weighs 2.85 kg/HP vs. V10's 3.28 kg/HP; GTK S 2.64 kg/HP vs. V10 plus 3.04 kg/HP and GTK RS 2.27 kg/HP vs. GT 2.90 kg/HP. 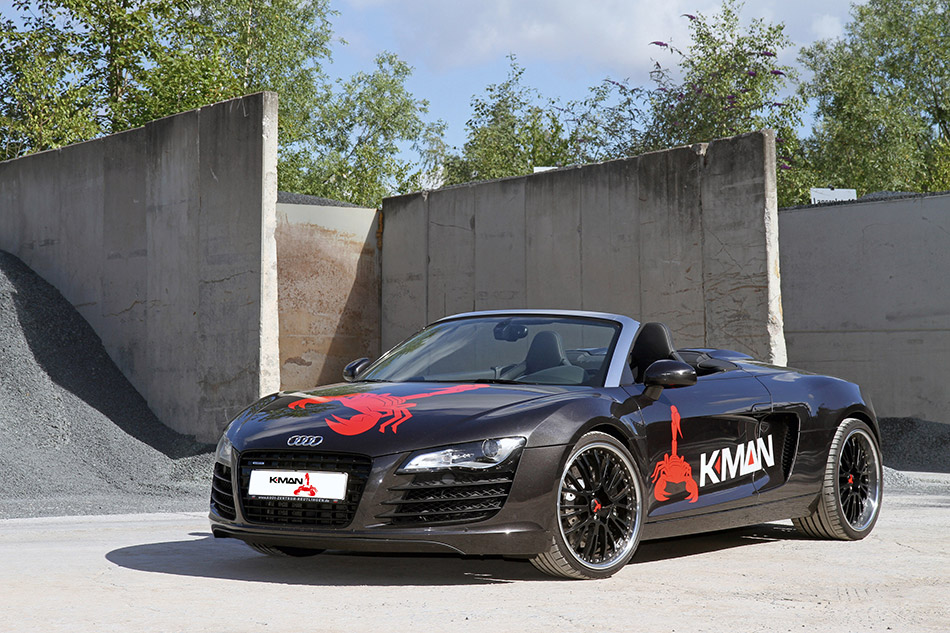 To be able to control the Power-Plus also in passages that are extremely demanding for drivers and have it translate into high speed, the K.MAN technicians endowed the GTK S and the GTK RS with the Club sport chassis frame from the establishment of Bilstein that was developed with the help of the quattro legend Walter Röhrl. The peak model GTK RS additionally received a reinforced brake system.

This set-up allowed K.MAN to optimally unleash its superiority over the serial models and outclass them in terms of vehicle dynamics. As a delicacy for sports car purists, K.MAN also optionally offers the manual gear for all performance stages.

In spite of its immense performance growth, the K.MAN vehicles such as the GTK S Spyder shown here, are delivered to the customers virtually without optical changes as opposed to the mass production series. If not otherwise desired, only the red brake calipers and details such as the rim cover with the company's logo warn "rivals" of the scorpion's sting in the asphaltic jungle. Optionally, K.MAN also has a wide range of carbon and GFK parts for those who prefer a little extravagance, and this allows K.MAN to offer individual identities from "cautiously different" up until the radical "DTM looks".

Moreover, the biturbo R8 stands out for a sound repertoire ranging from a soothing sonorous muttering in the lower torque range up until the infernal roaring emitted by the fully-charged eight-cylinder series in the fully loaded range as from 4,500 rpm thanks to the specially developed exhaust system including Cross-X pipe and valve control.

Yet the K.MAN technicians take their responsibility for the expensive vehicles of their customers seriously. Accordingly, the focus of all efforts is set on routine usability and longevity on equal basis in spite of the enormous performance boost. This is where their over 20 years of working experience in the field of turbo conversion and engine control optimization pays off. For this reason, all K.MANs are delivered with a 24-month warranty and do not fall short of any vital standard compared with its serial brothers also in this respect. Even though all components are manually manufactured with maximum precision or obtained from reputable providers (for instance Garrett-turbo charger), K.MAN offers the biturbo bolides at comparably affordable prices. The only consolation for the serial vehicles is thus the servicing interval that has been reduced to 15,000 km or 12 months, which must be maintained to sustain the K.MAN's 24-month warranty.