The fact, that the name of the Augsburg company MB INDIVIDUAL CARS is program, got about not only in current expert circles. Michael BRANDNER as owner of the company nearly every day provides evidence for the perfect coordination of car ennobling, rims & tires and power improvement.

In the present case, the Bavarian professionals choose a BMW 335i Touring (E91), originally in sapphirine black. After the house own "MB" power improvement up to 400 HP including piper cross air filter, middle muffler exchange and fitting the black painted end pipes up to 90 mm (2 in.), its visual appearance has been modified decently, but consequently. Now, the individually created "MB" 1 series M front bumper leaps immediately to the eye. Besides the LCI bonnet, there have been installed M side sills and a M rear bumper with performance rear diffuser beyond and Blackline rear lamps above. White LED lamps for angel eyes and the M3 outer mirrors of E90 are without any doubts another highlights. 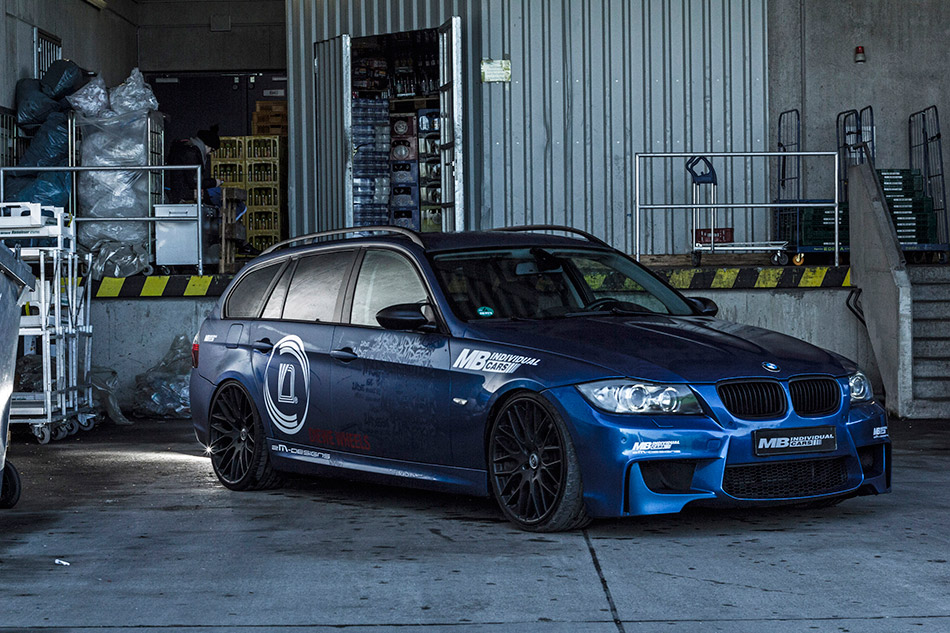 Obviously, the focus is on the ingenious, almost as being customized for this car wheel-tire-combination: This beautiful new interpretation of the classic wheels made by DIEWE WHEELS is named Impatto and stands for high tire loads at low dead-weight, whereat the as most as possible concave spoke arrangement has been ultimate objective. The front axle has been equipped by rims 9x20 ET32 with Hankook tires EVO S1 in 235/30 ZR20, the rear axle by rims 9.5x20 ET20 with 265/25 ZR20 tires. The "draft" is warranted by AP coilovers. But at first, the wheel arch edges had to be modified, because the wheels on the front axle have been spaced by H&R wheel spacers. Behind the rims, black colored brake calipers can be seen.

Last but not least the acting in the same fields as MB partner company 2M-Designs has designed and implemented a complete car wrapping. The bicolor foiling begins in front with gloss blue metallic, changing to mat blue metallic and publicity lettering, there among you can find also the rim producer logotype. All windows in rear of the B-pillar are tinted. The outer refitting to Shadow line is also made by foil wrapping, likewise the bicolor diffuser outfit. The interior also has been partially foil wrapped.