The all-new FIAT Panda Cross is set to make its world début at the Geneva Motor Show on March 4th, 2014.  Building on the successful formula of the FIAT Panda 4X4, a car that's as happy in city traffic as it is taking on the toughest off-road conditions, the new Panda Cross offers even more all-terrain capability thanks to a host of new features, better performance and improved ground clearance.

Key to the additional off-road ability of the FIAT Panda Cross is its standard ‘Torque-on-Demand' transmission system, which utilises the vehicle's ELD (Electronic Locking Differential) and advanced ESC (Electronic Stability Control) systems to manage the engine's torque delivery in difficult driving conditions. The advantages of this system are that it is both fully automatic and requires zero maintenance and it is controlled by the new Terrain Control selector, which offers the driver three driving modes depending on the driving situation:

In addition, the FIAT Panda Cross is also fitted with oversized all-season 185/65R15 tyres, larger than those fitted to the standard Panda 4x4, which were developed specifically to combine drivability and traction in low-traction situations with positive on-road handling on both wet and dry surfaces.

The suspension of the FIAT Panda Cross has been developed to combine on-road comfort, handling, road-holding and safety with improved off-road characteristics. An independent MacPherson suspension is employed at the front while a torsion beam layout has been developed for the rear to accommodate the all-wheel drive mechanicals, thereby saving weight and providing better ride and acoustic characteristics than the semi-trailing arm arrangement of the previous generation Panda Cross. 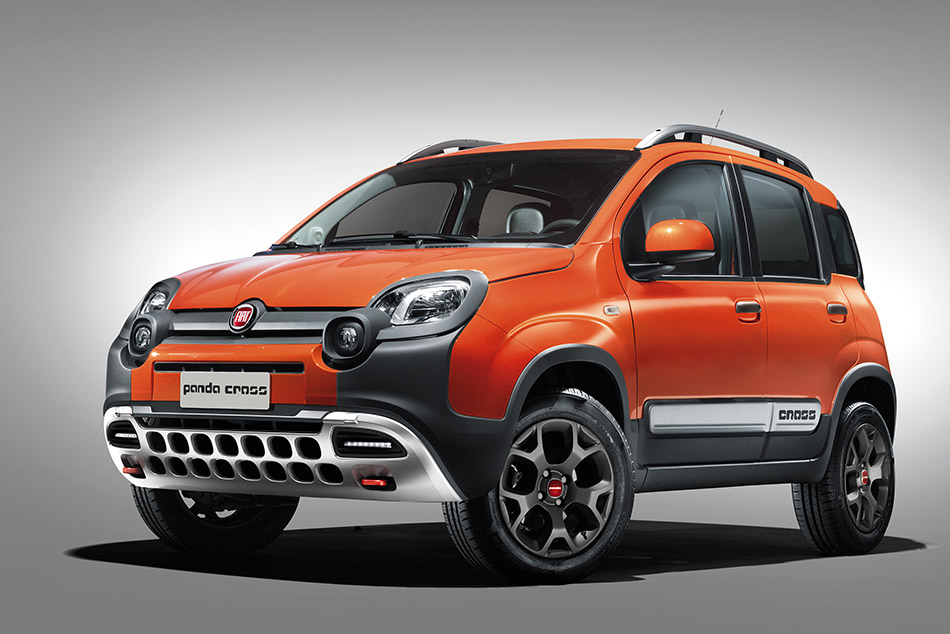 In addition to its generous ground clearance – 16cm for the MultiJet II version and 15cm for the TwinAir Turbo version – the FIAT Panda Cross also benefits from improved approach and departure angles: Its 24° approach angle represents a three degree improvement over the previous model, while its 33° departure angle represents an improvement of one degree. The new FIAT Panda Cross also boasts a break-over angle of 20° and a 31.5° (70%) climbable gradient.

Two engines will be offered in the new FIAT Panda Cross, both with Start&Stop as standard and both offering a five horsepower boost compared to the standard FIAT Panda 4X4.  The new 0.9 TwinAir Turbo engine now produces 90hp at 5,500 rpm and 145Nm (107 lb ft) of torque between 1,900rpm and 3,000rpm, or 100Nm (74 lb ft) at 2,000 rpm in ‘Eco' mode. This engine, on the combined cycle, offers an impressive fuel consumption figure of 57.6mpg and CO2 emissions of 114g/km, and comes equipped with a six-speed manual transmission with a unique first-gear ratio that was specifically engineered with off-road driving in mind.

Styling-wise, every detail of the Panda Cross has been designed to make it immediately recognisable and distinctive: The front end features new light clusters, a new bumper and new fog lights integrated into front facia. New LED DRLs are also built into the skid plate, which is finished in a satin titanium colour with perforations that recall the Panda's signature "squircle" motif.

From the side, wheel arch extensions, side mouldings with the ‘Cross' logo and new roof bars with a satin titanium finish set the FIAT Panda Cross apart from its siblings, while its new 15-inch alloy wheels sport a five-spoke V design and a burnished metal finish. The rear end is also revised with a new bumper with under-body protection, echoing the design of the front skid plate, a new rear light cluster and a chrome tail pipe.  Finally, new tow hooks finished in brilliant red emphasise the off-road character and complete the look of the new Panda Cross.

Inside, the new Panda Cross features unique fabric/eco-leather upholstery and a new dashboard finish with a distinctive copper fascia, while standard equipment includes a leather-trimmed steering wheel with remote controls; a leather-trimmed gear knob; automatic climate control; Blue&Me™ connectivity; electric door mirrors; a height-adjustable driver's seat and, of course, the new Terrain Control selector. City Brake Control, which has won FIAT recognition in the 'Euro NCAP Advanced 2013' awards, is available as an option. The innovative system recognises the presence of other vehicles or obstacles in front of the car, braking automatically if the driver fails to intervene directly to avoid a collision or mitigate its consequences at speeds of up to 18.6mph.

The new Panda Cross joins the Panda Trekking and Panda 4X4 to offer customers a unique range of extremely capable and characterful mini-SUVs. Having invented the segment in 1983, the Panda 4X4 range has amassed 500,000 sales since it was first introduced and since the Panda Trekking and Panda 4X4 were introduced, just over a year ago, around 26,300 units have been registered, underscoring the enduring popularity of these distinctive vehicles. Approximately 30,000 examples of the previous-generation FIAT Panda Cross, which was first launched in 2004, were registered and it is expected that the new model will not only build on this success but also consolidate the success of the wider FIAT Panda range, which is the second-best seller in its segment in Europe, after the FIAT 500. Together with the FIAT 500, the Panda has led FIAT to a position of undisputed leadership in the A segment in 2013 with a market share of more than 27% in Europe.

The new FIAT Panda Cross is due to go on sale in the autumn with pricing, final UK equipment specifications and technical details to be announced closer to its launch.