Since 1996 the Swiss company DAHLER (proper spelling DAHLER) Design & Technik GmbH in Belp (not far from Bern) has been responsible under the management of Christoph DAHLER for optimized, modified BMW and Wiesmann vehicles. The highest requirements are met by means of innovations, versatility and individuality and provide for exclusive driving pleasure. The DAHLER-crew does not only modify the vehicles with various components according to the wishes of the customer, but demanding customers can also order a "complete vehicle", which is then delivered as DAHLER << competition line >>. Key terms in this context are increased performance tested according to the strict Euro 6 directive, sports suspension -each perfectly tuned to the respective vehicle, interior individualization with leather and/or alcantara, MID-display and stainless steel exhaust system with tailpipes. 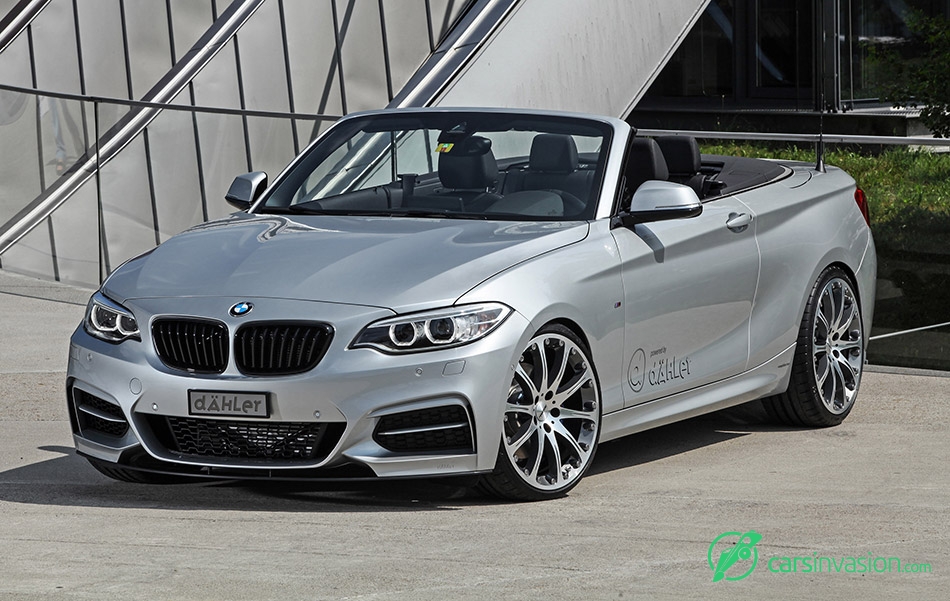 Cabriolet-version of BMW M235i, which is professionally optimized, is originated from exactly this << competition line >>, as forerunner of the BMW M2, which is awaited with great anticipation by the interested fan base. Compact class-cabriolet from Munich was equipped not only with performance improvement to 390 hp (= 287 kW) as part of the DAHLER-tuning program. A multiple adjustable DAHLER-coilover suspension displays also its perfection. Noticeable increase in longitudinal and lateral dynamics is the exciting result, because the bolide can be adjusted to the needs of the pilot in the best possible way both through its 18-fold adjustability of compression and rebound stages as well as through the lowering.

The DAHLER-performance increase includes also suspension of the electronic Vmax-pastern. Thus, the powerhouse reaches a maximum speed of 288 km/h. If the compact sports car is also equipped with the All Wheel xDrive, it will be able to accelerate from 0 to 100 km/h in only 4.2 seconds, after all, four tenths of a second less than the Series…

So or similar the motto of the Swiss, the art of the mobility, is redefined day after day. With gold rush fever instead of remaining in a state of shock.