Following the success of the Veyron 16.4 Super Sport, Bugatti did not wait long before the company received inquiries about an open-top version of the Grand Sport that could also deliver 882 kW (1,200 hp). "We were instantly electrified by the idea of transferring the power of the Super Sport to the Grand Sport, that delivers a maximum of 1,001 hp, thus taking the roadster to a new level," says Wolfgang Dürheimer, president of Bugatti Automobiles S.A.S.

He continues: "Our team has managed to transfer the world's most powerful car engine to the open-top sports car, while taking the vehicle's dynamics and aerodynamic parameters into consideration. We are proud to present the fastest roadster ever at the Beijing Motor Show with the Asia premiere of the 1,200 hp Grand Sport Vitesse." The second car Bugatti presents at Beijing is the "Wei Long 2012", a one off Grand Sport model equipped with unique porcelain dragon relief parts at the in- and outside paying homage to the year of the dragon. 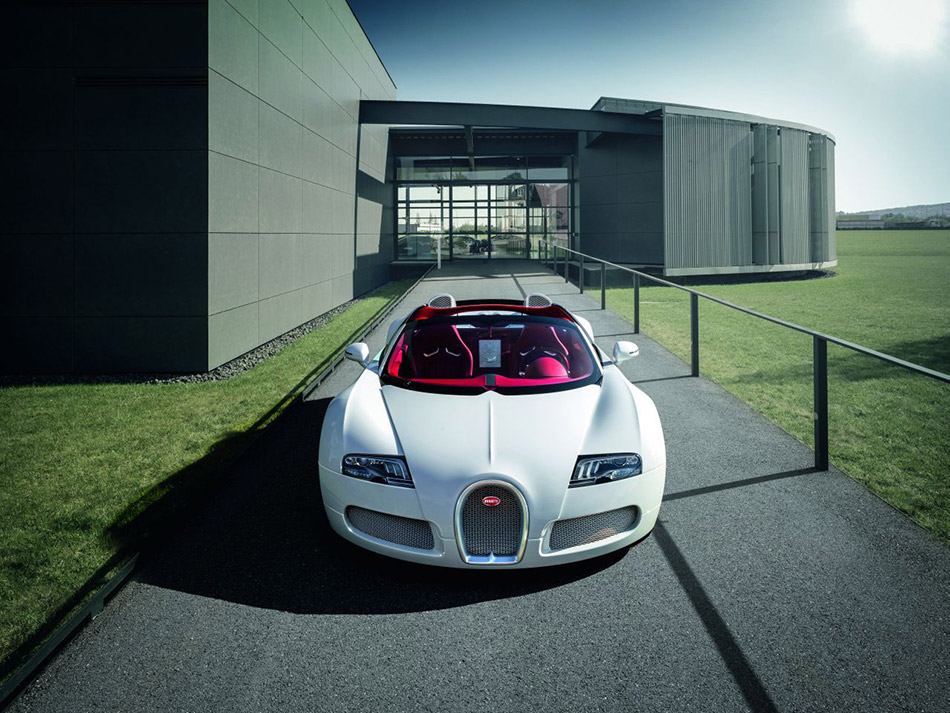 The 199 hp increase over the Grand Sport has been mainly achieved by using four larger turbochargers with new intercoolers. Furthermore, Bugatti has extensively reinforced all drivetrain components in order to safely transfer the immense force the Vitesse is capable of. As a consequence of the larger turbochargers and the overall reduced back pressure, it was even possible to reduce the fuel consumption slightly, even with the increased power output.

In order to put the unrivalled power on the road safely and masterfully, the engineers have reconfigured the chassis of the Vitesse. Thanks to the quick-responding dampers that have been adapted from motor racing, the control of the vehicle has been further improved and balanced perfectly.

In addition to the incomparable lateral acceleration that is able to go up to 1.4 g, the precise interaction of the tires (on all-new, lighter 20-inch "Vitesse"-type alloy wheels), together with the intelligent all-wheel-drive system, ensures stable handling. Since the reconfigured ESP kicks in slightly later, for example when you accelerate around corners, the Grand Sport Vitesse also provides a more dynamic performance in these types of situations. It goes without saying that Bugatti adapted the brake-cooling system to account for the even higher engine output. The brakes, which are unparalleled in terms of stability and performance, now have additional and larger air intakes.

Bugatti has developed a new roof spoiler for the Grand Sport Vitesse that significantly reduces wind noise and buffering in the interior. Furthermore, there will be a new windbreak for the roadster that can be stored away compactly in the luggage compartment when not in use. Both components will also be available for the Grand Sport. While in place, they allow for an extremely relaxed, open-top driving experience even at speeds around 200 km/h (124 mph).

Numerous aerodynamic measures that appeared on the Super Sport's front and rear have been adapted for the Grand Sport Vitesse. The front end is therefore characterised by larger air intakes; the two central air intakes to the left and right of the Bugatti radiator grille are divided horizontally by a bar. The bottom air vent stretches sideways into the wheel housing providing this exceptional sports car an extremely masterful appearance. Immediately below the air intake, you will see a new, visually refined front spoiler that has been designed in a similar way to the splitters used in motor racing. The rear end, which is also derived from the Super Sport, is characterised by a double diffusor and a centrally positioned twin tailpipe.

Carbon fibre is also the dominant material in the interior (along with stainless metals such as Aluminium and Magnesium) of the Grand Sport Vitesse. Numerous interior parts are now made from carbon fibre in the 1,200 hp roadster. This includes the center console extension, a cover with EB logo in the rear-bulkhead leather trim (between the seat backrests) and the belt outlet covers on the seats. The décor on the center console, the door inserts and the adjoining trim on the instrument panel are also made from carbon fibre. The bi-color black trim parts (for example, in the roof console) are also new in the Grand Sport version, as is a special seat design for the Grand Sport Vitesse. 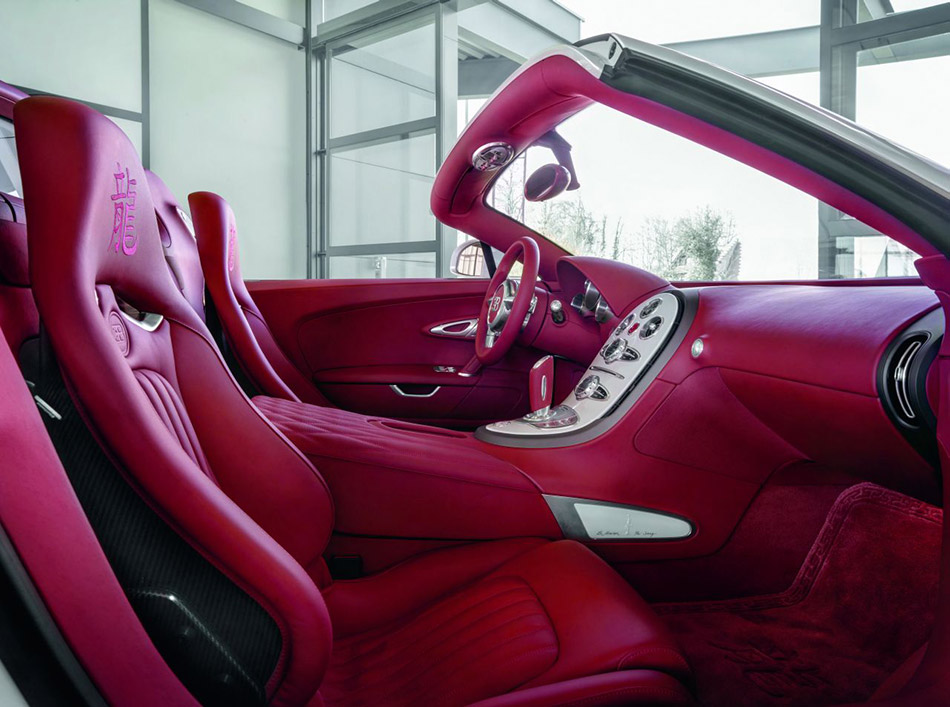 Configuration of the show vehicles.

There is no end to the individualization options for the Bugatti. Each one of the 350 Veyrons built is therefore completely unique. This also applies to the other models that Bugatti is exhibiting at the 2012 Beijing International Motor Show. The Grand Sport Vitesse is painted in all black with red rims in a diamond pattern. Its carmine red interior and seats showcase an aggressive, dynamic look that fits well with the positioning of the new Grand Sport Vitesse. It will cost 1.80 million euros. The classic Grand Sport, a sports car with an elegant, artistic orientation, will, of course, remain in the range.

This year in Beijing, Bugatti is presenting a special model to pay homage to the year of the dragon. The one off Grand Sport model "Wei Long 2012" was developed together with the Königliche Porzellan Manufaktur Berlin and has been fitted with dragon relief sculptures on finest porcelain both on the body and in the cabin endowing the car with deep Chinese cultural heritage. With highly elaborated dragon sculptures on the oil and fuel cap, its white polished exterior and carmine red interior the "Wei Long 2012" shines with elegance and nobility.

The headrests are embroidered with the Chinese "Dragon" character, and the handcrafted 100% silk floor mats are embossed with Chinese "Dragon" character. Highlight is the exquisite center piece with a white porcelain dragon relief sculpture with every detail of a dragon's body so vividly craved and elaborated. These unique and artistic Chinese features together with the breathtaking speed of the Bugatti Grand Sport of more than 400 km/h make the "Wei Long 2012" the dragon of the automotive industry. This one off model will cost 1.58 million euros