The 2013 Enclave makes its public debut at the New York Auto Show, where it will be on display April 6-15. It goes on sale this fall. 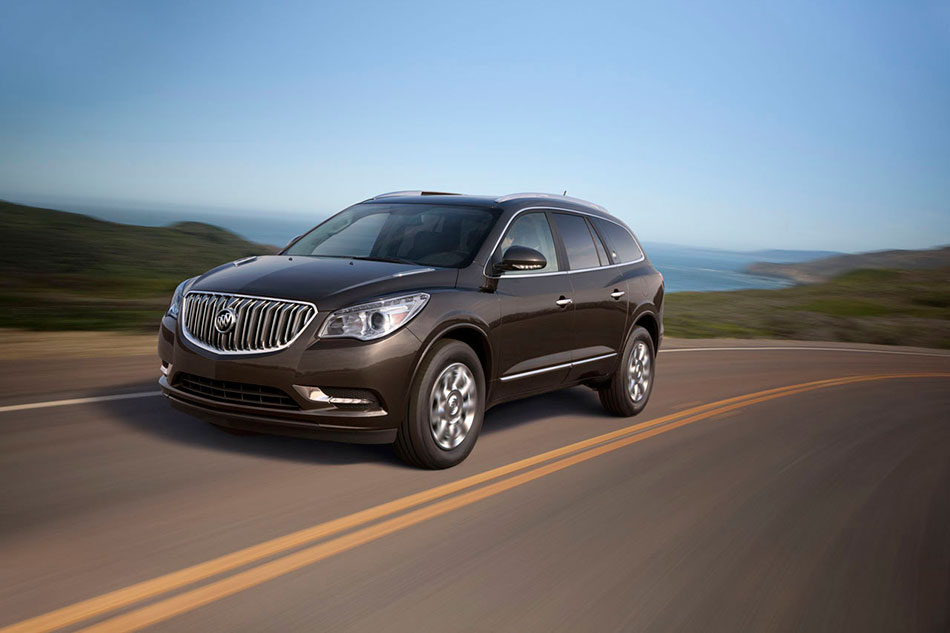 "The 2013 Enclave advances the award-winning design, craftsmanship and technology that reintroduced Buick to a new generation of customers," said Tony DiSalle, U.S. vice president of Buick Marketing. "We evolved the interior and exterior design, increased luxury amenities and materials, and engineered purposeful technologies that will make the Enclave continue to resonate with luxury crossover owners."

Enclave saw record sales in 2011, making it more popular than the three-row crossovers from Acura, Audi and Lincoln. More than 58,000 were sold last year – with nearly 50 percent sold to customers switching from non-General Motors vehicles.

The Enclave is offered in front-wheel-drive and all-wheel-drive models, and powered by a direct-injected 3.6L V-6 and an updated six-speed automatic transmission that contribute to the more refined driving experience. Buick's QuietTuning engineering process reduces, blocks and absorbs unwanted noise from the Enclave's cabin, making it quieter than a Lexus RX350.

The Enclave's new appearance is instantly recognizable as a modern Buick and the LED lighting elements enhance its technologically advanced presence. The blue translucent rings around the Xenon HID headlamps are Buick design cues found on other models, adding distinction across the brand's lineup.

At the rear, the exhaust outlets are framed with a chrome finish within the rear fascia, for an integrated appearance that exemplifies Buick's attention to detail. New LED taillamps provide a safety benefit by illuminating more quickly than conventional bulbs when the brakes are applied.

Harmonious interior environment
The 2013 Enclave's interior is defined by luxurious amenities and high-quality materials, with changes that create a more contemporary ambience and support the integration of Buick IntelliLink. Highlights: 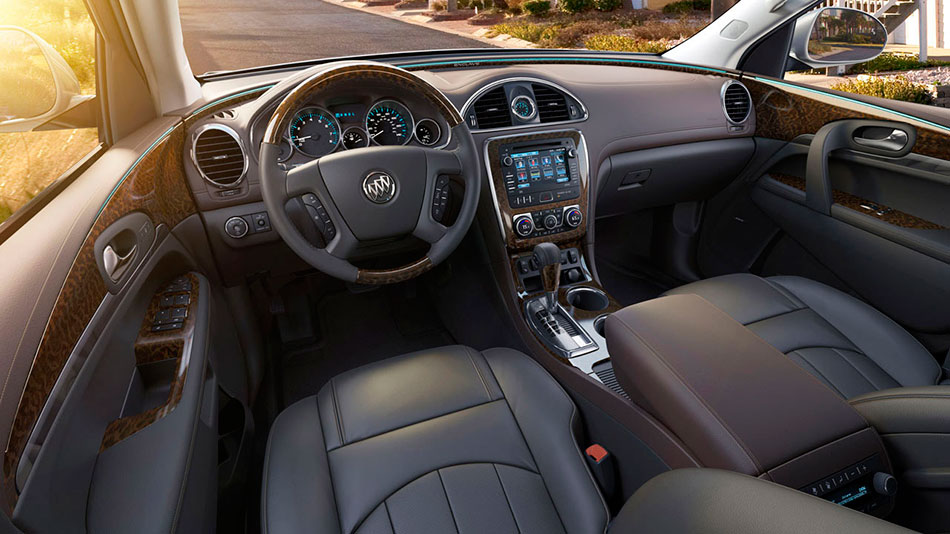 "Enclave's sense of fashion is enhanced with rich saturated tones and the new color combinations, which are driven by Buick customers' lifestyles," said Ven Lai, Buick creative designer, color and trim. "The new Cocoa interior color is a great example. It was developed specifically for the Enclave, adding a higher degree of visual warmth that is complemented by the soft feel of the Nuance sandstone leather – a material that has similar characteristics to leathers used in home furnishings. It makes for a comfortable and rewarding place to be for daily commutes or long weekend drives."

The new center stack was developed for easy, intuitive interaction with the new IntelliLink system, along with redundant controls on the genuine Mahogany-accented steering wheel. The tri-zone climate system's new controls are designed to be more intuitive, too, with easier, at-a-glance operation, bold digital temperature readouts and larger controls that are easier to operate with gloves.

Enclave offers three rows of seating, available in seven- or eight-passenger configurations. The second-row seats feature the SmartSlide system, which allows easier entry to the third row, with the pull of a single handle. There is 23.3 cubic feet (660 liters) of cargo space behind the third row and a maximum of 115.2 cubic feet (3,263 liters) of cargo space available when the second and third rows are folded. That's more than the Mercedes-Benz R Class, Infiniti JX, Acura MDX, Lincoln MKT, Audi Q7 and the Volvo XC90.

IntelliLink brings wealth of choices
Buick's IntelliLink system is standard on all models and enhances the driving experience with a higher level of wireless connectivity and customized options – all while building on the safety and security of OnStar.

IntelliLink is intuitive and easy to use and includes the capability of setting up a "home page" for favorites. It integrates online services such as Pandora® internet radio and Stitcher SmartRadio™ using hands-free voice and touch-screen controls via Bluetooth-enabled smartphones, building on the voice-activated Bluetooth hands-free calling capability already offered in other Buick models. Additional features:

IntelliLink is standard with all Enclaves, including those with the optional navigation system. The IntelliLink screen also serves as the display for the standard rearview camera system. A premium 10-speaker Bose audio system is also available and is optimized for the Enclave's refined interior acoustics.

Industry-first front center air bag highlights comprehensive safety package
In 2012, every Buick model was named a Top Safety Pick by the Insurance Institute for Highway Safety, underscoring the brand's commitment to safety leadership. The 2013 Enclave builds on that commitment with the industry's first front center airbag – a standard feature.

The front center air bag, standard on all 2013 Enclave models, was created to help protect drivers and front passengers in far-side impact crashes. It deploys from the inboard side of the driver's seat and positions itself between the driver and front passenger, delivering a more comprehensive occupant restraint system. No other air bag in passenger vehicles today offers this type of protection in the front seat.

Standard safety features also include StabiliTrak, traction control, panic brake assist, rear-vision camera system and seven total air bags – including head-curtain side air bags covering outboard occupants in all three passenger rows. Rounding out this suite of safety features are two systems available for the first time on the 2013 Enclave: side blind zone alert and rear cross traffic alert, which use radar to watch spots the driver may not be able to see – and provide visible and audible warnings to help prevent collisions.

A smoother, more controlled driving experience
The Enclave's engineers improved its carlike driving experience with revised front and rear dampers, for greater smoothness and an enhanced feeling of control. In the front suspension, new dual-flow dampers and rebound springs are used to reduce the jarring feel of bumps, as well as provide a quieter and smoother ride. In the rear, new low-velocity control shocks help reduce road inputs that could be felt inside the passenger compartment.

All models feature independent front and rear suspensions, with variable-effort power-assisted steering; and a direct-acting stabilizer bar on the front MacPherson-strut suspension helps provide a more immediate feeling of responsiveness during turns. Eighteen-inch wheels are standard and 19- and 20-inch wheels are available.

Revised controls in the next-generation Hydra-Matic six-speed automatic transmission also contribute to Enclave's smoother feel behind the wheel. They improve the shift feel and overall driveability – and the fuel-saving six-speed design helps the three-row Enclave deliver an EPA-estimated 24 mpg on the highway (FWD models).