"At Dodge, racing is an integral part of our heritage and embodies our competitive spirit, so we're very excited to announce the next chapter in racing for Dodge with our all-new Dodge Dart," said Reid Bigland, President and CEO - Dodge Brand. "The new Dart Global RallyCross Championship car with 600 horsepower and driver Travis Pastrana takes our passion for performance to all new heights."

Pastrana, 28, is a four-time Rally America champion and owner of multiple supercross and motorcross championships. He also owns Nitro Circus, an empire that includes a television show, live tours and 3D feature film project. Pastrana is one of the most searched athletes in the world (6 million Google searches in 2010) and he has more than 3.5 million Facebook followers.

"When I first heard about GRC, I was really interested, and after watching some of the rounds last year and then actually competing at X Games I was hooked!" said Pastrana. "Now to be able to partner with Dodge to field my own program this year is a dream come true. The new Dodge Dart offers the perfect platform for rally cross, and I look forward to putting it on the podium all season long!"

Ralph Gilles, President and CEO – Street and Racing Technology Brand and Motorsports, Chrysler Group LLC, said that having Pastrana piloting a Dodge Dart and competing in GRC is a natural fit. 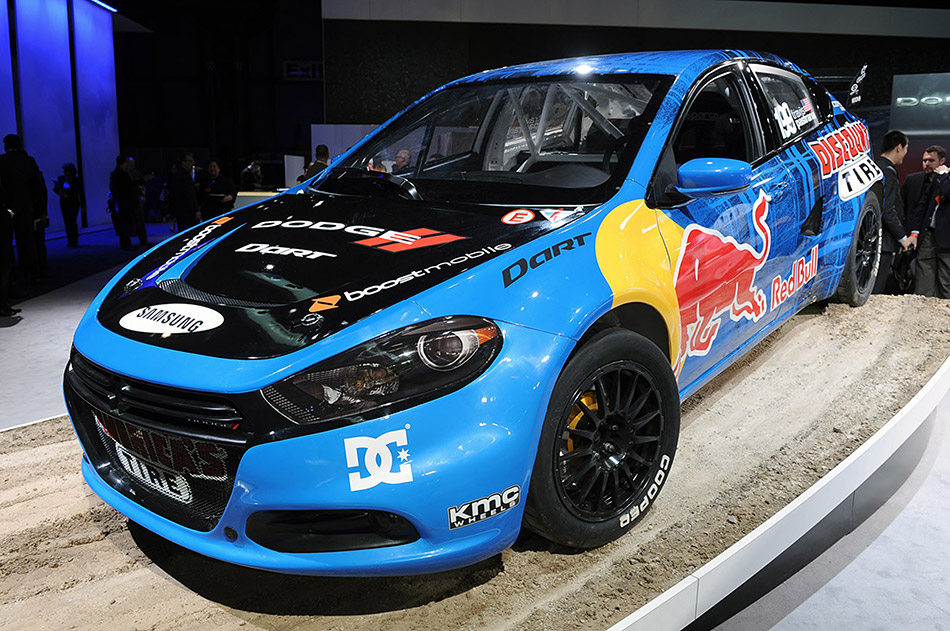 "Travis is a living example of what action sports activities are all about, so he fits in perfectly with the youthfulness and passion for performance of the Dodge brand and the SRT Motorsports team," said Gilles. "He's proven that he can handle just about anything with wheels, so it's going to be great to watch him pilot our new Dodge Dart in Global RallyCross."

The Dart rally car is custom built specifically for Global RallyCross racing, but shares a few traits with the production Dodge Dart. Both vehicles have exceptional aerodynamics, are agile and fun to drive and will add a little excitement to their segments. Powered by a purpose-built, 2.0-liter, 4-cylinder, 16-valve turbo-charged 600-horsepower engine mated to a Sedav 4-wheel drive gear box that puts out more than 550 lb.-ft. of torque, the Dart rally car is ready to go.

The 2013 production Dodge Dart features three state-of-the-art powertrains that produce up to 184 horsepower and 184 lb.-ft. of torque and a sporty, fun-to-drive experience. The Dart features an athletic, sporty exterior, a world-class interior with high-quality materials, state-of-the art technology and enough exterior and interior color and material choices to fit any customer.

"The sport is extremely exciting and the on-track action can be brutal on the drivers and the cars," said Bailey. "The cars are jumping higher than ever and landing safely. The Dart rally car is lightweight with a very powerful motor. The zero to 60 mile-per-hour times are incredible, as low as 1.9 seconds, so with Travis behind the wheel, we can't wait for the season opener."

Global RallyCross is a spin-off of the X Games rally races. It combines the skill of rally racing with the excitement of X Games. The revolutionary motorsports series enters its second season and features high-flying extreme competition between cars that are relevant to today's youth. The series consists of seven racing events in closed-course rally tracks and incorporates bumper-to-bumper competition among 600 horsepower all-wheel drive vehicles. There are 70-foot jumps over racing traffic, creating a "motocross with cars" action.

The series begins May 26 in Charlotte, North Carolina, and concludes Sept. 29 in Las Vegas. Also included are races at X Games scheduled for June 30-July 1 in Los Angeles. It's one of the most anticipated stops on the schedule. The ESPN family of channels will broadcast live coverage of the entire 2012 race series.