With the 52nd running of the Rolex 24 at Daytona only four months away, Riley Technologies and veteran racer Ben Keating remain on schedule to debut the Viper GT3-R when the United SportsCar Racing (USCR) season opens in January. Built as the first mass-produced, GT3-based car designed and manufactured in the United States, the Chrysler Group's Street and Racing Technology (SRT) Motorsports V-10 thoroughbred emerges from the factory eligible for a wide variety of competition arenas in addition to USCR, including the Sports Car Club of America (SCCA), North American Road Racing Association (NARRA), Pirelli World Challenge GT Class and International GT3 Championships. Keating was first in line to purchase a SRT Viper GT3-R from Riley Technologies earlier this year.

He plans to compete full-time in the USCR's GT Daytona Class in 2014. The team will be managed by Keating and Bill Riley, vice-president of Riley Technologies. The car will be maintained by Riley Technologies in Mooresville, N.C. Jeroen Bleekemolen has been named primary co-driver for the team. The car will carry No. 33 with primary sponsorship from ViperExchange.com and Client Command. A native of Houston, Keating won the SRT Viper Cup championships in 2011 and 2012 piloting a Viper ACR-X and wanted to move up to the next biggest stage. The newly formed GT Daytona Class (which mixes professional and amateur drivers) was a perfect fit. "Racing is in our name – Street and Racing Technology – so the line is very blurred between what we do on the road and what we do on the track," said Beth Paretta, director of Marketing and Operations, SRT Brand and Motorsports. "Racing is a big part of everything that SRT does. It epitomizes the best of what our SRT performance brand represents and showcases the Viper's natural affinity for performance. 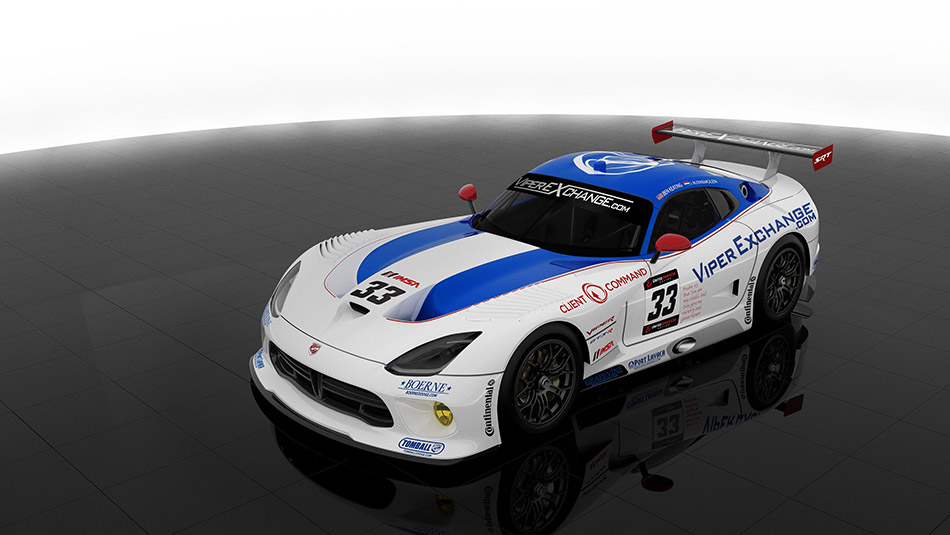 There's no doubt the Viper GT3-R will be exciting to watch in 2014." Viper's road racing heritage is synonymous with championship-caliber lineage. The last Viper GT3 car debuted in 2005 and went on to win two GT3 championships and a World Challenge GT title. That car was based on the GTS-R program dating back to 1996. Keating looks forward in being the next in line to reach victory lane driving the snake. "I don't have the time to invest to be a professional sports car driver," said Keating, who operates the highest volume Viper dealership in the nation in Tomball, Texas. "However, I am passionate about racing and I've been successful in a Viper.

I feel I can measure up extremely well compared to other amateur drivers, especially driving a Viper." "I'm passionate about the car. I've had lots of success in the car and as soon as I heard there was going to be a GT3 Viper race car developed, I was the first person in line to jump on it. I feel like I've got the best car, the best class structure and the best co-driver. Everything is fitting together perfectly for success." Bleekemolen, a native of the Netherlands, won the 12 Hours of Sebring earlier this year and was on the winning team the past two years in the GT3 Class at the 24 Hours of Dubai.

He claimed the GTC championship in the American Le Mans Series in 2010. His roots are deep with Viper as he was the 2001 FIA GT1 co-champion driving a Viper. Like Keating, Bleekemolen is eager for the 2014 season to begin. "I think the Viper is going to be one of the best cars in the GT Daytona Class," said Bleekemolen. "That's one of the main reasons I'm pleased to join this team. The team is very strong and the Viper is one of the best cars out there. I raced the Oreca Viper back in 2001 for the GT1 championship, so I have some experience with the Viper."

Current development timelines have the GT3-R's first on-track testing set for next month as the team prepares for the first official USCR test in November. "The first time that we will put the car on a track will be mid-October," said Keating. "We want to shake it down and develop it as much as we can in that test. We expect to publicly debut the car at the USCR official test in November." Riley is looking to build several Viper GT3-Rs over the next several months but right now the focus is on the first unit which is getting a final check for next month's test. "The Viper GT3-R is a good progression from a customer-based Viper," said Riley. "The parts are now available worldwide. We're talking to a lot of different customers here in the U.S. and worldwide about 2014. "I'm excited about having Ben in our camp. Being involved in sports car racing is what we do. I think we can have a very, very strong run next year in the GT Daytona Class."