Posting a fast lap time on a road course requires a combination of driver skill and a properly balanced high-performance machine. The Chrysler Group's SRT (Street and Racing Technology) team delivers half that equation with the 2014 SRT Viper TA (Time Attack).

The street-legal SRT Viper TA is specifically built for the performance enthusiast driver who likes to exercise their machines at the more than 150 road-race courses around North America.

Based on the SRT model, the lightest Viper in the lineup, the TA Special Edition Package builds upon the vehicle's ultra-low center of gravity, 50/50 weight distribution and largest contact patch in the production car world. The Viper TA uses chassis parts developed specifically by the SRT chassis dynamics team to attain the most out of the race-car-like chassis and create the most confidence inspiring Viper ever. SRT developed new spring rates, dampers, sway bars and brake components, combined as a system with the Viper's available Advanced Aerodynamics Package, to create one of the most track-capable production cars in the world. The changes keep the SRT Viper TA glued to the track, while the brake system is enhanced for improved balance and to resist thermal saturation during track work. 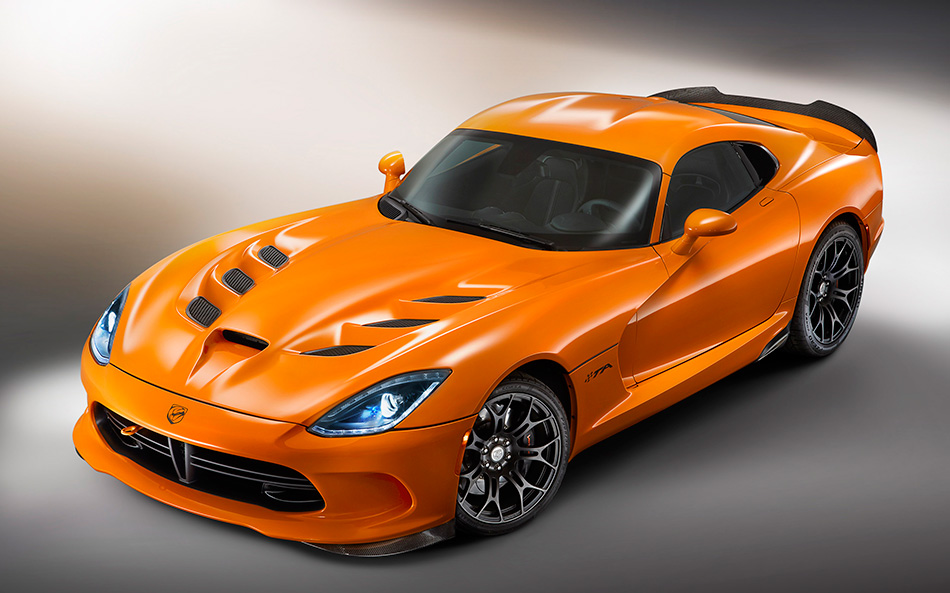 "The new 2014 SRT Viper TA is engineered for the serious performance enthusiast who needs a car that can be driven daily yet has mind-boggling limits on a road course that would rival many track-only cars. As one of the best handling and fastest supercars available on the market today, the TA enables our customers to take their passion for high performance driving to the next level," said Ralph Gilles, President and CEO — SRT Brand, Chrysler Group LLC. "The SRT engineering team set out to create a world-class supercar that has few competitors on the track or the road at any price."

A carbon fiber rear applique accentuates the rear width proportions and adds another level of detail.

Under the hood of the 2014 SRT Viper TA is the handcrafted, all-aluminum 8.4-liter, mid-front V-10 overhead-valve engine. Performance ratings are 640 horsepower and 600 lb.-ft. of torque – the most torque of any naturally aspirated sports-car engine in the world.

Inside, the performance driver-oriented cabin of the 2014 SRT Viper TA uses the same standard premium ballistic fabric racing seats from Sabelt, featuring a lightweight fiberglass shell created by a state-of-the-art resin transfer molding technology for mass reduction and long-term durability. Both driver and passenger seats can also accommodate a 3- or 6-point harness for racing belts.

Production of the 2014 SRT Viper TA is underway at the Conner Avenue Assembly Plant in Detroit.  Vehicles will begin to arrive at dealerships in the fourth quarter of 2013.