The Dodge brand recognizes that the heroic men and women who protect us must be equipped with the best performing pursuit-rated vehicle loaded with tactical equipment and technology. And for 2015, the Dodge Charger Pursuit – America's high-performance police vehicle – has been significantly redesigned, infused with even more world-class safety and security, technology and pursuit-rated hardware, all while offering 370 best-in-class horsepower, factory-installed Mopar upfit packages and the segment's most advanced all-wheel-drive (AWD) system for maximum tactical performance, all-weather traction and fuel-efficiency.

"Dodge has a strong police car heritage, and we are proud to offer a vehicle armed with modern muscle and cutting-edge technology to help law enforcement agencies perform their duties," said Tim Kuniskis, President and CEO — Dodge Brand, SRT Brand and Fleet Operations, Chrysler Group LLC. "The new Pursuit police car is based on our new 2015 Dodge Charger. It delivers up to 370 best-in-class horsepower, is available in both rear- and all-wheel drive, has a new driver-focused cockpit and adds new safety and security features, as well as new state-of-the art technologies, all designed to deliver the ultimate performance expected from Dodge."

Restyled with a confident "superhero" stance 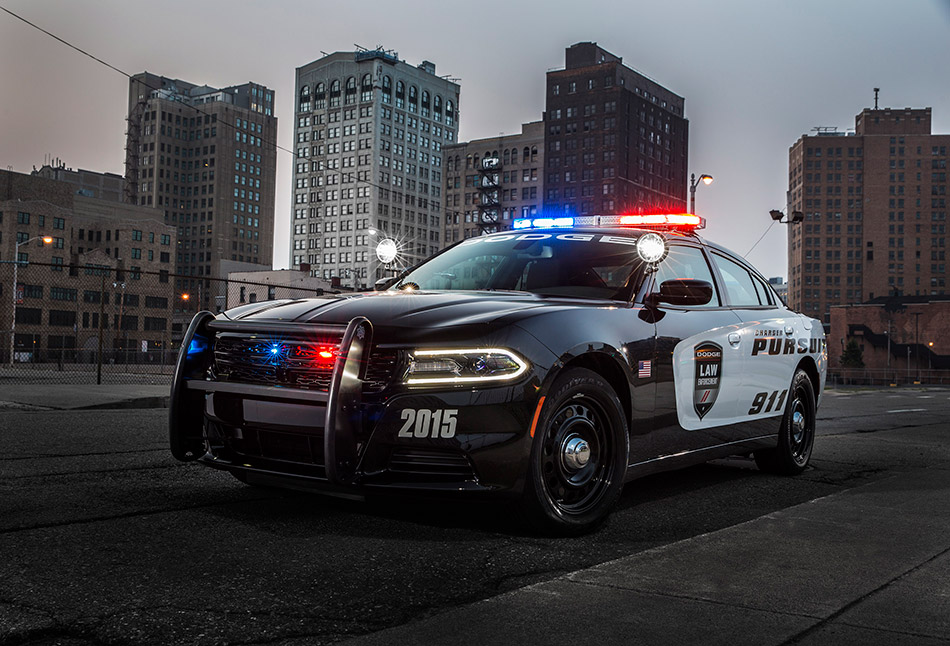 Starting up front, the 2015 Charger Pursuit's new front styling features an all-new crosshair grille, LED turn signals and daytime running lights (DRLs), and new projector-beam headlamps. The Charger's all-new forward-leaning front fascia gives it a superhero's confident stance. Slim, elongated DRLs and a full-width grille enhance the width of the sedan, while Dodge logos are echoed in the outside corner of each headlamp for added detail.

In profile, the 2015 Charger carries forward its muscular Coke-bottle styling, with streamlined side scallops, while headlamps and tail lamps are now wrapped around each corner to create a trimmer, more lightweight look.

At the rear, the C-pillar has been moved rearward to create an even more pronounced fastback appearance. Dodge Charger Pursuit's signature "racetrack" LED tail lamp has been updated with the same continuous glowing light ribbon technology that first debuted on the new Dodge Durango. The center high-mounted stop lamp is relocated from the top of the deck lid to the roofline inside the back glass, allowing for the centering of the backup camera.

As the new Charger Pursuit was designed and engineered alongside the new 2015 Dodge Charger, the driver-focused interior has been significantly upgraded with the high-tech treatment. A new 7-inch full-color multi-view instrument gauge cluster offers more than 100 intuitive ways to customize how information is presented. At the center, a new instrument panel center stack with next-generation Uconnect 5.0 system with 5-inch touchscreen and Bluetooth is standard equipment. New for 2015, every Charger Pursuit includes hands-free Uconnect Phone standard.

Framing the Charger's new instrument cluster is a newly redesigned three-spoke thick rim sport steering wheel. The buttons to control driver information functions are now larger and illuminated to make them easier to operate. Buttons for Uconnect and mobile phone access now reside along the bottom edge of the horizontal spokes, while audio controls are found on the back of the steering wheel spokes.

Developed with the guidance of the brand's Police Advisory Board, the new 2015 Dodge Charger Pursuit features a mobile-command interior with a new vehicle systems interface module for easy equipment integration, police-duty front seats with unique bolstering to accommodate officers' belt-mounted gear and column-mounted shifter with Auto Stick to free up space for center-console mounted controls.

Feedback from the field improves the new 2015 Dodge Charger Pursuit

With input from law enforcement officials and Dodge brand's 22 member Police Advisory Board, the 2015 Dodge Charger Pursuit continues to add improvements to meet the high expectations and performance needs of the heroes who protect us. Continued improvements for 2015 include:

In addition, Dodge Charger Pursuit V-6 with its aluminum 3.6-liter Pentastar V-6 engine delivers 292 horsepower and 260 lb.-ft. of torque and offers E-85 flex-fuel capability and up to 26 mpg highway.

For the 2015 Dodge Charger Pursuit, Dodge and Mopar have teamed up to offer law enforcement officers with the ability to customize their vehicle to their exact specifications right from the manufacturer. To enhance Dodge Charger Pursuit's world-class levels of technology, safety, handling and efficient power, Mopar worked with leading-industry upfit suppliers to develop the best combination of tactical equipment and performance.

Mopar conducted extensive testing to ensure that its police upfit equipment meets and exceeds the heavy-duty durability cycle and tests requirements of the Dodge Charger Pursuit. 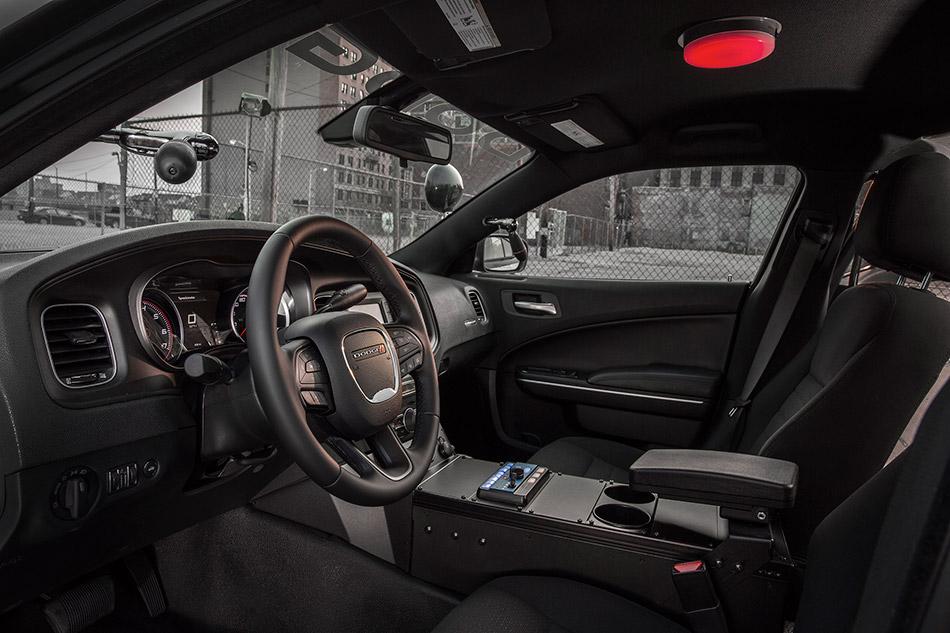 The base police prep package for the 2015 Dodge Charger Pursuit includes the following:

The wiring prep package for the 2015 Dodge Charger Pursuit includes the following:

In addition to these packages, the following Mopar parts may be ordered separately: