The Dodge brand is bringing its A-game for its 100th anniversary, significantly updating both the iconic Challenger muscle car and Charger four-door sedan.

The iconic Dodge Charger gets a full-body makeover for 2015 along with powertrain updates that include a standard TorqueFlite eight-speed automatic transmission on both Charger's standard 3.6-liter V-6 Pentastar engine and, new for 2015, the R/T equipped 5.7-liter HEMI® V-8.

The 2015 Dodge Charger will be available in four models: SE, SXT, R/T and R/T Road & Track. Charger is built at the Brampton (Ont.) Assembly Plant in Canada. Production is slated to begin in the fourth quarter of 2014. 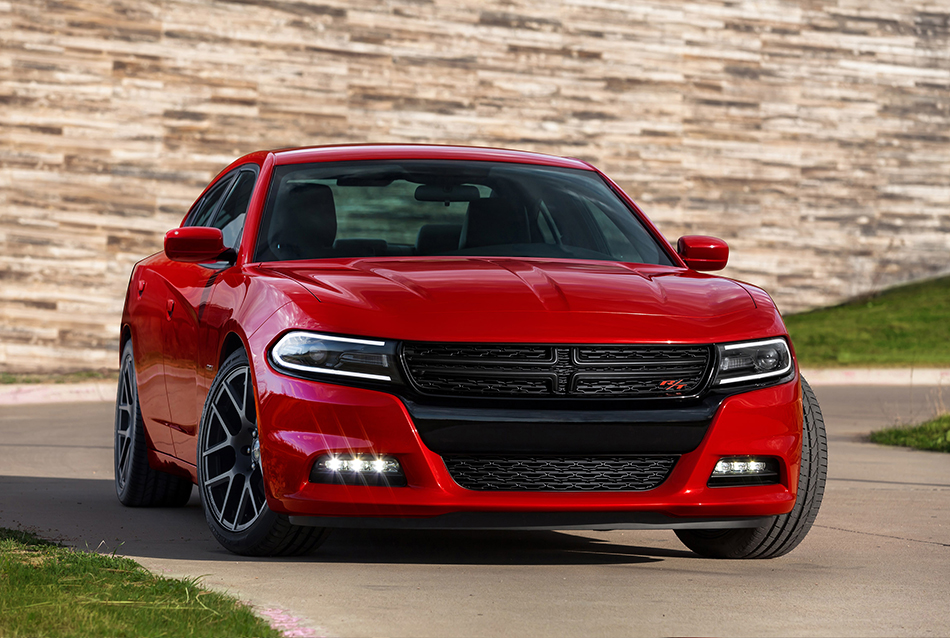 The 2015 Dodge Charger competes in the U.S. full-size car market, but stands alone in a class by itself as the only American-bred four-door muscle car. In March of 2014, the Dodge brand reached a significant milestone, with Challenger and Charger sales combining to sell a total of more than 1 million units in the United States.

The Charger's combination of aggressive and youthful image, full-size functionality and world-class engineering and quality resonates with young and affluent buyers. Charger's purchasers on average are 15 years younger than its competitors' buyers within the segment, with more than half identifying themselves as millennials or Generation Xers.

The Charger's appeal is attracting a high number of conquest buyers, helping drive a 62 percent increase in sales since 2009 - double the growth of the standard full-size car segment. In 2013, Charger posted its best sales year since 2007, further fueling a 3.2 percentage point gain in market share since 2009.

To help Charger keep its edge, Dodge is loading up the new sedan with a slew of new technologies and a host of premium features, such as high-end interiors, the latest technologies and impressive powertrain options, along with a new exterior design that is distinctly Dodge.

Inspired by its performance-enthusiast roots when Charger first launched more than 45 years ago, the new Charger successfully pays homage to past muscle cars while offering distinctly modern all-new exterior and interior appointments.

The all-new exterior of the 2015 Dodge Charger is spiritually inspired by the iconic second-generation Charger from the late 1960s, and for 2015, specifically draws its cues from the 1969 model. With its rear-wheel-drive (RWD) platform and proven power, the Charger's modern take on old-school muscle is sure to resonate with today's enthusiasts.

Starting up front, the 2015 Charger's new front styling features an all-new crosshair grille, LED fog lamps (on SXT and R/T), turn signals and daytime running lights (DRLs), and new projector-beam headlamps (HID lights on premium trims). The Charger's all-new forward-leaning front fascia gives it a superhero's confident stance. Blacked out front-end graphics create a mask that creates a family resemblance with the Dodge Dart and Durango. Slim, elongated DRLs and a full-width grille enhance the width of the sedan; Dodge logos are echoed in the outside corner of each headlamp.

In profile, the 2015 Charger carries forward its muscular Coke-bottle styling, with streamlined side scallops, while headlamps and tail lamps are now wrapped around each corner to create a trim, sinuous and tailored look. The net effect is that the car appears significantly lighter and more nimble.

The rear styling makeover begins at the touchdown point of the C-pillar, which is moved rearward to create an even more pronounced fastback appearance combined with a shorter rear overhang. A new three-piece spoiler is more integrated into the decklid, while the signature "racetrack" LED tail lamp takes on the same continuous glowing ribbon of light that debuted on the new 2014 Dodge Durango. The center high-mounted stop lamp is relocated from the top of the decklid to the roofline inside the back glass, allowing centering of the Charger's backup camera.

The Charger's interior is instantly brought to life by its unique premium aluminum-lithograph driver bezel, which enables a seamless, billeted and highly detailed appearance that carries through the instrument cluster and center console. Thanks to advanced manufacturing techniques, the aluminum bezel features one-piece construction for a consistent appearance from nearly the A-pillar to the surrounding area of the Uconnect system, highlighting all the ergonomically located vehicle functions for the driver.

The instrument cluster has also been given the high-tech treatment and now includes a full-color 7-inch TFT screen similar to the one found in the 2014 Dodge Durango and Dodge Dart. Standard on all models, this screen gives drivers more than 100 ways to customize how information is presented.

Framing the Charger's new instrument cluster is a newly redesigned three-spoke thick rim sport steering wheel with available paddle shifters. The buttons to control driver information functions are now larger and illuminated to make them easier to operate. Buttons for Uconnect and phone access now reside along the bottom edge of the horizontal spokes. As before, Charger's popular audio controls are still found on the back of the upper steering wheel spokes.

Looking to the center stack, the 2015 Charger features the latest and greatest Uconnect Access suite of technologies. All 2015 models feature a standard Uconnect touchscreen, including a 5-inch or the largest in the class 8.4-inch. Under these large and easy-to-use touchscreens are redundant button and knob controls for audio and climate functions.

Once limited to sedans costing twice as much, the new 2015 Dodge Charger democratizes this exclusive world-class technology, offering the segment-exclusive TorqueFlite eight-speed automatic transmission standard on every model, including new for 2015, on Dodge Charger SE models and HEMI-powered R/T models.

For Dodge Charger customers who want 31 mpg V-6 fuel economy with even more power, the Dodge Charger SXT model offers the Rallye Appearance Group - providing up to 300 horsepower and 264 lb.-ft. of torque thanks to a unique cold-air induction system, sport-tuned exhaust and engine calibration.

Refinement was a key objective for every component during the design phase of the engine and was achieved by using advanced computer-aided engineering techniques. Structural, intake and exhaust areas of the engine are designed to deliver low levels of overall sound. Combined with the use of premium hydraulic powertrain mounts, the 2015 Dodge Charger delivers refinement in all powertrain applications and at all RPMs.

The 5.7-liter HEMI V-8 engine also features variable-cam timing (VCT) to improve fuel economy in two ways. First, it reduces the engine's pumping work by closing the intake valve later. Second, it increases the expansion process of the combustion event. This allows more work to be transferred to the wheels instead of being lost out of the exhaust port as heat. VCT improves engine breathing, which improves engine efficiency and power.

From its updated award-winning Uconnect Access system, to the availability of Uconnect Access services with roadside assistance, theft-alarm notification, voice texting and the ability to turn the Charger into a Wi-Fi hot spot to the new Dodge Performance Pages, 3-D navigation and segment-exclusive premium Beats Audio system, the 2015 Dodge Charger delivers a slew of high-tech features for the ultimate driving experience.

With its available mobile phone app, Charger owners can start their vehicle and lock or unlock doors while away from the vehicle. Charger owners also can access on-demand Wi-Fi making their car a moving hot spot.

Charger's new for 2015 Uconnect Via Mobile lets customers enjoy their personal Internet radio accounts and stream audio content using their own mobile device data plans. It seamlessly brings four popular Internet radio apps into the Dodge Charger, including Aha by Harman, iHeartRadio, Pandora and Slacker. Like all Uconnect-brand features, it is designed to be easy to learn and easy to use.

The 2015 Dodge Charger's available navigation system accommodates one-step voice-controlled destination entry and enhanced 3-D navigation map graphics, making it simple for driver's to recognize where they are and where they need to go.

The Charger also offers premium audio systems that are designed to immerse passengers in the ultimate audio experience, including the segment-exclusive high-definition Beats Audio system.

Thanks to the speed of its PowerNet electrical architecture, the 2015 Dodge Charger models equipped with Sport mode can instantly transform the four-door muscle car's personality to improve performance. By engaging Sport mode, Charger drivers can reduce shift times from approximately 400 milliseconds to 250 milliseconds, increase engine and throttle responsiveness, adjust electronic stability control (ESC) settings and firm up the steering feel.

Additionally on the Charger R/T Road & Track model, the driver can use the all-new Dodge Performance Pages, which is available on the segment's largest 8.4-inch Uconnect touchscreen. It includes active launch control, launch control RPM settings, performance timers and performance gauges, such as G-force indicators and engine performance.

The Dodge Charger offers more than 80 safety and security features, including many that are new for 2015. New available features for the model year include Full-speed Forward Collision Warning-Plus, which provides autonomous braking and, under certain circumstances, slows or brings vehicle to full stop when frontal collision appears imminent.

Adaptive Cruise Control Plus with Full Stop helps maintain distance from the vehicle ahead and, under certain traffic conditions, the system can bring the new 2015 Dodge Charger to full stop without driver intervention. New Lane Departure Warning with Lane Keep Assist introduces subtle steering-wheel input to alert the driver of inadvertent lane departure and assist with corrective action. 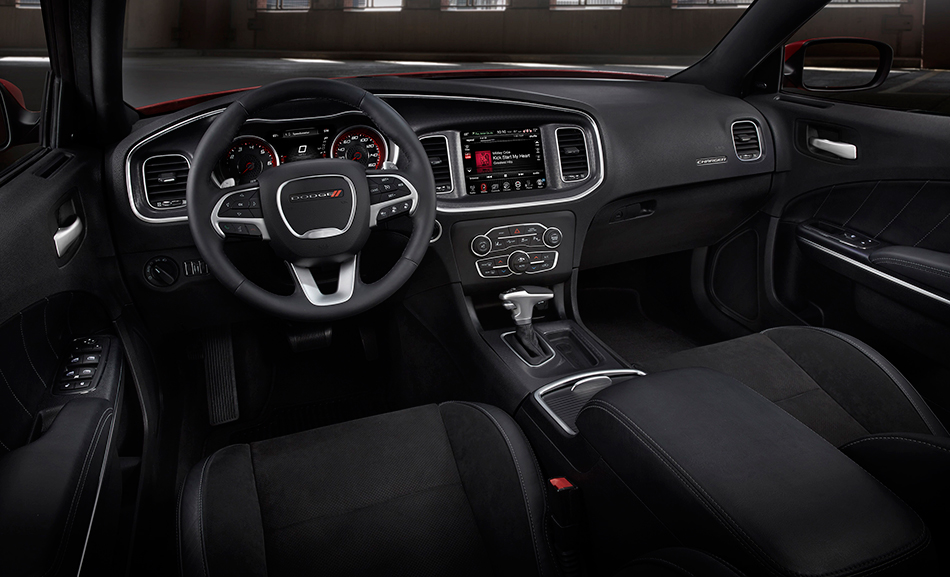 Charger's ParkSense rear park assist system works when the car is in reverse, sensing objects at low speeds. If imminent collision is detected, the system will provide a momentary, autonomous brake pulse or, in certain circumstances, bring the vehicle to a stop.

The Charger's standard Keyless Enter 'n Go activates interior lighting and enables passive cabin entry and trunk access through the driver's personalized key fob. The new Charger also includes a standard ultrasonic security system with an anti-tilt feature that sounds an alarm if vehicle is towed or raised on a jack.

The 2015 Dodge Charger SE and SXT are available with AWD capability thanks to a segment-exclusive active transfer case and front-axle disconnect system that improves fuel economy by up to 5 percent. No other major automotive manufacturer offers the combination of these two independent technologies. Dodge Charger's innovative AWD system seamlessly transitions between RWD and AWD with no driver intervention. When AWD is not required, the system automatically disconnects the front axle to maximize fuel economy while still providing the outstanding performance and handling inherent in RWD vehicles. To better anticipate low-traction roadways, the Dodge Charger's innovative AWD system automatically engages in cold weather, when slip is detected or when the windshield wipers are on in rainy or snowy conditions.