The new high-performance concept is inspired by the vehicle that roared into the hearts of car enthusiasts everywhere during the 1960s. The new GT40 joins Ford's "Living Legends" lineup of production and concept cars, including the Ford Thunderbird and Mustang, and the Forty-Nine concept.

"GT40 is the ultimate Living Legend," explains J Mays, Ford vice president of Design. "It's a true supercar with appeal equal to that of the greatest sports cars in the world, but with the addition of a heritage no one can match. Essential elements of the original - including the stunning low profile and mid-mounted American V-8 - continue in this latest interpretation of the classic." 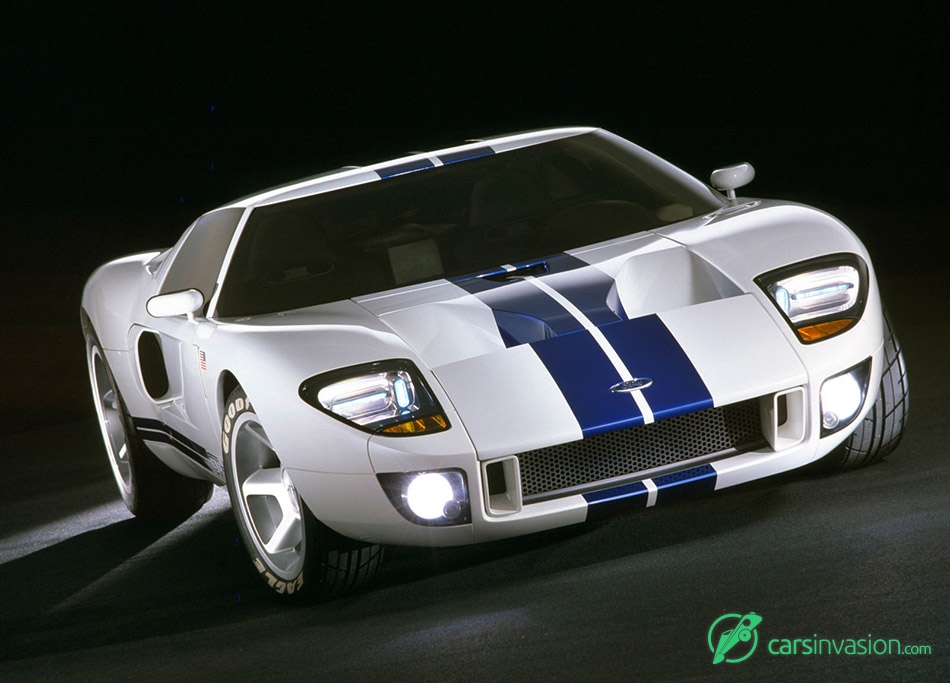 While the new concept and the original both share the mystique of the GT40 name, they share not a single dimension. The concept is more than a foot and a half longer and stands nearly four inches taller. Its new lines draw upon and refine the best features of GT40 history and express the car's identity through modern proportion and surface development.

The Ford GT40 concept casts the familiar, sleek silhouette of its namesake, yet every dimension, every curve and every line on the car is a unique reinterpretation of the original. The GT40 features a long front overhang reminiscent of 1960s-era racecars. But its sweeping cowl, subtle accent lines and fiber-optic headlamps strike a distinctly contemporary pose.

The front fenders curve over 18-inch wheels and Goodyear white-lettered tires. In the tradition of championship racers, the doors cut into the roof. Prominent on the leading edge of the rear quarter panel are functional cooling scoops that channel fresh air to the engine. The rear wheel wells, filled with 19-inch Goodyear tires, define the rear of the car, while the accent line from the front cowl rejoins and finishes the car's profile at the integrated "ducktail" spoiler.

"Like its namesake, the GT40 concept is not over-wrought with advanced technologies," Mays says. "While it represents the best of Ford design, engineering and expertise, it is a no-frills machine. You won't find voice-activated telematics here - not even power windows - just pure, refined performance."

Looking in through the backlight, one finds the essence of the sports car in the MOD 5.4-liter V-8 engine and its complex array of polished stainless-steel header pipes, braided stainless steel fuel lines with anodized aluminum fittings and supercharger with intercooler.

"The GT40 concept should do three things: go fast, handle exceptionally and look great," says Chris Theodore, Ford's vice president of North America Product Development. "To be true to its Ford heritage, we had to create a supercar that would be uniquely a Ford. Anyone can do technology showpieces, high-displacement engines and modernistic designs, but there's much more to a GT40. There's heritage and heart. We think this car remains true to the spirit of its predecessors." 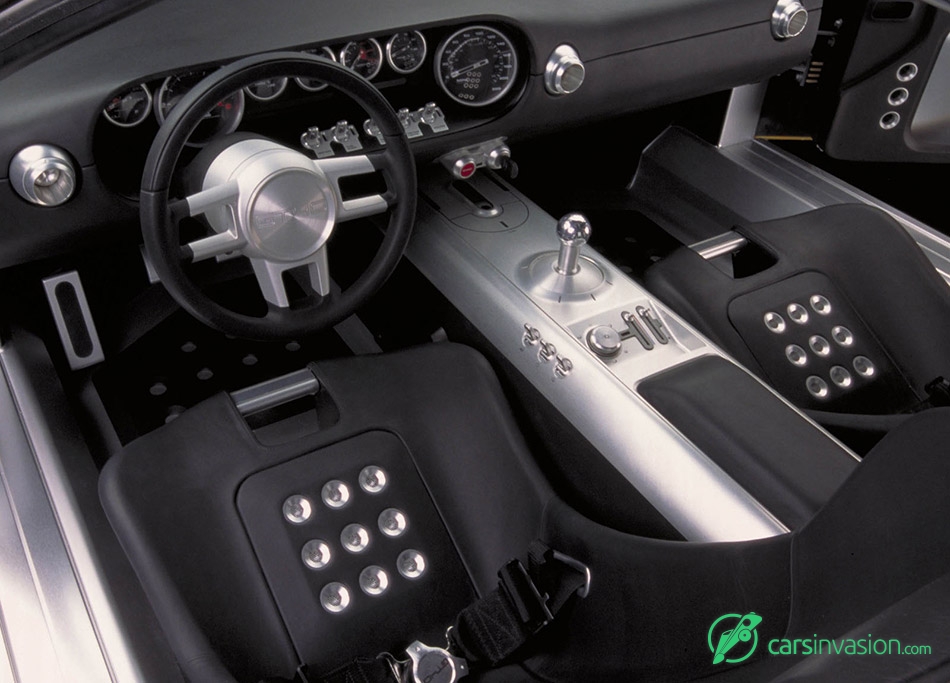 As on the historic car, the composite body panels are unstressed. Instead of steel or honeycomb-composite tubs used in the 1960s, Ford's SVT Engineering group developed an all-new aluminum spaceframe as the foundation for the Ford GT40 concept. It features four-wheel independent suspension with unequal-length control arms and longitudinally mounted spring-damper units to allow for its low profile.

Braking is handled by six-piston aluminum Alcon calipers with cross-drilled and vented rotors at all four corners. When the rear canopy is opened, the rear suspension components and engine become the car's focal point. Precision-milled aluminum suspension components and attached 19-inch Goodyear tires - combined with the overwhelming presence of the V-8 powertrain - create a striking appearance and communicate the GT40 concept's performance credentials.

The powerplant is an all-American V-8 from Ford's modular engine family. The MOD 5.4-liter V-8 in the Ford GT40 concept features aluminum four-valve heads, forged crankshaft, H-beam forged rods and aluminum pistons fed by a supercharger, all combining to make more than 500 horsepower and 500 foot-pounds of torque. These figures match or exceed those of the most powerful period GT40, a car that could handily top 200 mph on the Mulsanne straight at Le Mans. Because of the supercharger and high-revving, free-breathing valvetrain, the new car produces this astounding power from an efficient 5.4-liter V-8 engine. The power is put to the road through an RBT six-speed manual transmission.