For 1994, the Mustang underwent its first major redesign in 15 years. The new design, code named "SN-95" by Ford, was still based on the "Fox" platform, but featured dramatically new styling by Patrick Schiavone that incorporated some stylistic throwbacks to earlier Mustangs. The car remained rear-wheel drive. It greatly revived the popularity of the brand. The base model came with a 3.8 L V6 engine rated at 145 hp (108 kW) while the GT featured the "5.0" 4.9 L V8, which now utilized the 5.0L Thunderbird intake manifold and a larger, 60mm throttle body, and was now rated at 215 horsepower. The successful Cobra model also returned, with its GT-40 equipped 5.0 L engine, now rated at 240 hp (179 kW), the extra 5 horsepower coming from a 70mm throttle body. The Mustang Cobra convertible was selected as the Pace Car for the Indianapolis 500, making it the third time that the Mustang had enjoyed such an honor. One thousand replicas were built and sold through select dealers. Larger brakes, a different transmission, and suspension modification followed. The Mustang was named Motor Trend magazine's Car of the Year for the third time in 1994. 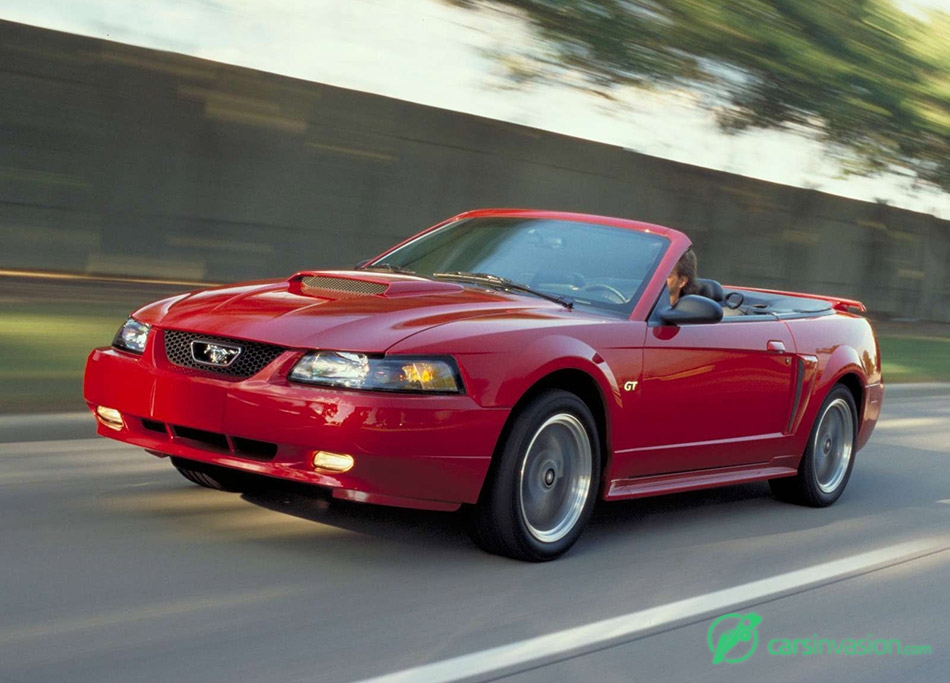 In 1996, Mustang fans were expecting the 5.8 L (351 in³) V8 to make its return to the regular production. However, this is not what they got. The 5.0 GT engine was replaced by a 215 hp (160 kW) 4.6 L SOHC "Modular" V8 engine. This engine had been introduced in Lincoln models, and was part of Ford's plan to "modernize" its engine lineup. The engine has two valves per cylinders, one for intake and one for exhaust. Despite being SOHC, it was not much of a revver, and while torquey, didn't make much power past 5000 rpm. The Cobra version was updated that year with a high-revving 305 hp (227 kW) dual over head cam configuration of the 4.6 L V8. The Cobra's block, cast by Teksid of Italy, was an aluminum, cross-bolted block. The heads had split ports and huge valves, and were arguably a little much for the street, but are still a favorite of modular race teams.

To compensate for the relative lack of low end response associated with these kind of cylinder heads, SVT also put an intake manifold with dual runners on the Cobra, with the secondaries not opening until around 3000 rpm, making these early modular Cobras very responsive at low speeds. In 1996, the 3.8 L V6 was bumped to a 150 hp (112 kW) rating. The longer valve covers for 8 cylinders not-withstanding, when the hood was opened up, the V6 mustangs were arguably more aesthetically pleasing than the V8 models, since the V8 engine bay was on the bland side, a far cry from the 5.0 engine bays, which the V6 actually resembles. In 1998 the SOHC 4.6 L V8 power was increased to 225 hp (168 kW) with a more aggressive computer and larger exhaust tail pipes. This was also the last year of the "Round Body Mustang." 1998 was also the only year that the "Sports" packaged was offered. It included unique black stripe (regardless of car color) on the hood which extended over to the wheel wells.