A refreshed model with Ford's "New Edge" styling themes came in 1999. Gone were many of the soft lines of the early SN-95s. Moreover, bite was added to the Mustang's bark. Even though the GT's 4.6 motor was out-sized by the 346-inch LS1 Camaros, the GT was far less expensive, and didn't have the quality issues that the F-bodies were known for, resulting in the Mustang trouncing the Camaro/Firebird in sales. In 1999, Mustang GT's power increased to 260 hp (194 kW) at 5250 rpm and a healthy 302 ft·lbf (409 N•m) of torque at 4000 rpm; redline was at 6000 rpm. Power suffered at the low end on this engine in comparison to the earlier SOHC models, but it more than made up for it at higher RPM due to the new "performance improvement" heads, cams, and intake manifold. The 4.6 Mustang now felt more like a high winding performance motor, as compared to the earlier 4.6's, which were essentially truck motors with dual exhaust. The Mustang GT now did the 1/4 mile in just over 14 seconds, versus the 98 GT's mid-14 second performances, and in 2000, Ford very silently put in more aggressive cams and raised the compression on the GT's, as well as offering a 3.55:1 final drive. 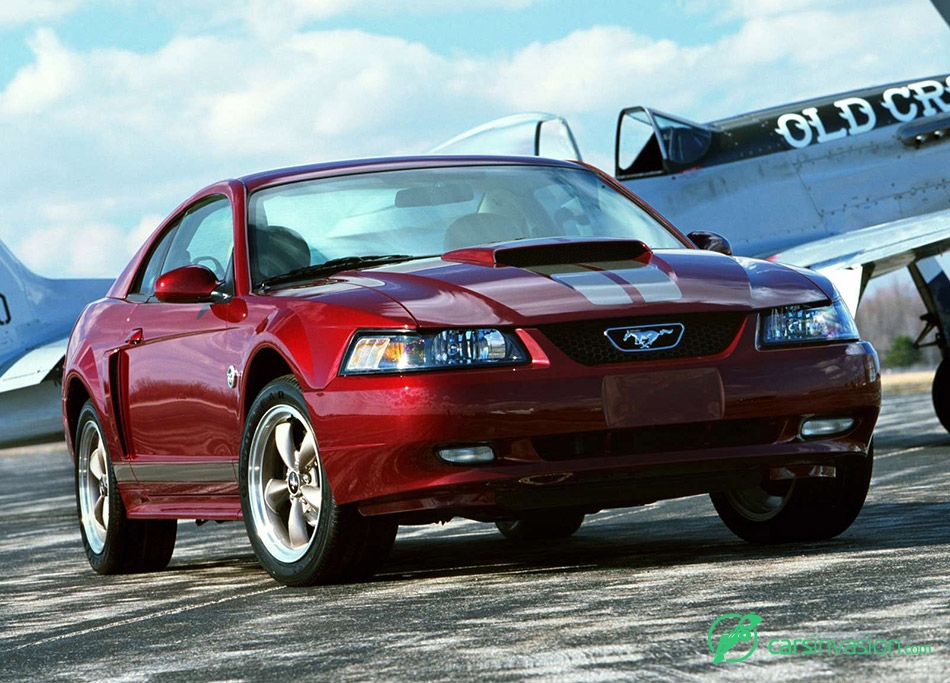 These changes put the GT solidly into the high 13's in the 1/4 mile, with trap speeds around 100 mph. Ford did leave many of their fans disappointed however, as there was a rumored(and spotted) GT with a 5.4 SOHC V8 with a 290 horsepower rating. Ford never followed through on it. On the V6 models, split-port induction replaced single-port induction, which increased the base model's power to 190 hp (142 kW). While the Cobra claimed 320 hp (239 kW), some magazines and owners contradicted it. 5.0 Mustangs and Super Fords claimed that it actually exceeded the torque rating, but didn't quite match the power rating. There were recalls for the 1999 model year Cobras, which were given intake and exhaust improvements, putting power at 320 hp to match the original claim. As a result, the Cobra was not produced in 2000 (except the limited Cobra R) and the company developed new parts to replace the missing power. These changes were incorporated into the 2001 model year Cobra, and when fixed, these quad-cammed mustangs hurry through the 1/4 mile in the lower to mid-13 second range.

In 2001, Ford offered a special version of its GT with the "Bullitt" nameplate. It was reminiscent of the 1968 390 fastback model driven by Steve McQueen in the movie of the same name. The car was slightly lowered and had name brand shocks with the addition of short length sub-frame connectors which improved the handling. Many lauded the improvements and called it the best handling production Mustang ever. Moreover, a new intake design and mufflers added put the power at 265 hp, later revised to a still conservative 270. More telling is the torque curve, which was vastly improved over the base GT models, 90% of its 302 ft·lbf available from 2000 rpm. This broader torque curve makes itself known at the drag strip, as these special edition mustangs could cover the 1/4 mile in 3-4 tenths of a second faster than a regular GT. These special intake manifolds also responded very well to superchargers, and were great for nitrous oxide, due to the fact that if there is a nitrous-backfire, the aluminum bullitt manifold wouldn't blow into a million pieces. 17 inch "American Torq-Thrust," wheels reminiscent of those on the car driven by McQueen in the movie were also used on this car and made optional on GT's wrapped in 245/45ZR performance rubber by Goodyear. The Bullitt featured a hood scoop that first appeared on the 1999 35th anniversary package Mustang GT's, as well as new side scoops, lower body moldings and c-pillars with unique rear side window shape. Other special features on the Bullitt included aluminum pedals and shifter, retro-styled gauges and seats, red brake calipers with the Mustang logo on them, and the removal of the spoiler and fog lamps regularly found on Mustang GT's, all for a cleaner look. The Bullitt Mustang was offered in only three colors: Dark Highland Green (like Steve McQueen's original Bullitt Mustang), True Blue, and Black. Total production was 5582 units, with 3041 of those in Dark Highland Green.