Ford's commitment to Chinese automotive customers took a giant leap forward today at Auto Shanghai 2013 with the unveiling of the Ford Escort Concept – the latest example of how the company's global DNA continues to evolve and cater to a growing and diverse mix of customers.

Building on the success of the Focus, the Ford Escort Concept is a new kind of compact car, designed for a very different customer. Both Focus and Escort Concept deliver high quality, safety and fuel economy. While Focus successfully meets the needs of those seeking a fun driving experience and high level of technology, the Escort Concept is for those customers who value exceptional roominess, uncompromised functionality and sophisticated design.

"By listening to our customers in China, we have developed the Ford Escort Concept to serve a new class of compact car customers," said Jim Farley, executive vice president, Global Marketing, Sales and Service and Lincoln, Ford Motor Company. "These are customers whose needs are not being completely met by existing compact cars. They are discerning, modern families, who want uncompromised functionality, quality and safety for themselves and the ones they care about."

Ford's success and experience in the compact car segment with Focus – along with customer feedback – provided valuable guidelines for the overall design of the Ford Escort Concept.

In Ford's market research, customers in China described seeking a vehicle that is stylish – but not one that is arrogant or pretentious – while also allowing for a balanced life that almost always includes family and friends.

"Its roomy interior, attention to detail, and precise and refined surface language really give the concept car its harmonious aesthetics, where desirable is actually attainable."

Ford designers started by adding length and then sculpting the vehicle with elegant lines to give it a natural flow. The longer profile creates more room for a comfortable and spacious interior while maintaining harmonious proportions.

While being designed for the specific needs of this subsegment, the Ford Escort Concept is true to the new global face of Ford, which was introduced on the all-new Mondeo – currently on display at Auto Shanghai 2013 – and made its first appearance on the Ford Evos Concept in 2011. On the Escort Concept, the slightly more upright grille and elongated, jeweled headlamps – carefully designed to resemble the lucky figure eight – provide a distinctive front end.

"The Ford Escort Concept represents the idea that you can get a compact vehicle with a premium aesthetic without sacrificing key features like space for families or having to pay a premium price tag," said Smith. 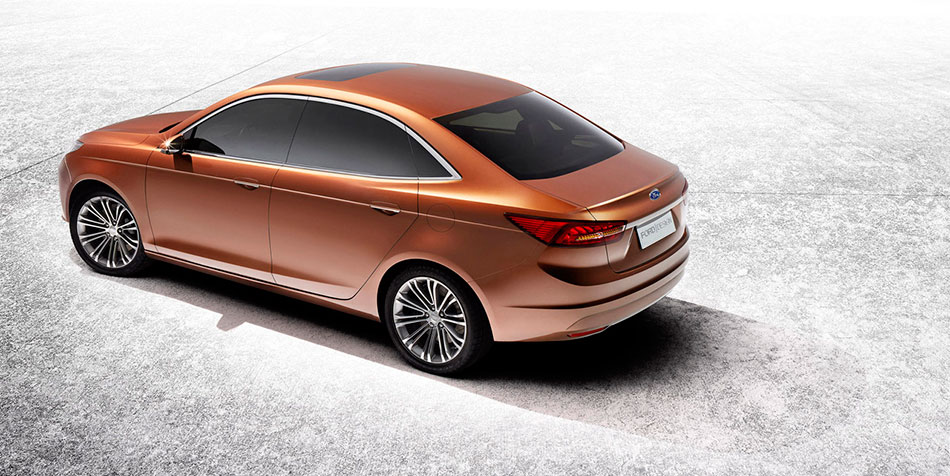 "The Ford Escort Concept gives an indication of how we could expand our offerings to compact car customers and further solidify our commitment to growing our presence in China," said John Lawler, chairman and CEO, Ford China. "Combined with the new Ford Mondeo, our terrific SUV lineup and the best-selling Focus, you can start to see what our lineup will look like when we reach our goal of bringing 15 new vehicles to China by 2015.

"The unprecedented growth and significant size of the vehicle market – especially the compact car segment – combined with the high degree of dynamic change in China is allowing Ford to extend its product plans to take advantage of the pace being set by this market."

The compact car segment in China today is around 5.5 million units per year, approximately the size of total annual auto sales in Germany and the UK combined, and larger than the total annual volume of vehicles sold in Japan (the world's third largest car market).

A number of manufacturers serve customers with legacy products in this segment, including Ford with the Ford Focus Classic.

The Ford Escort Concept offers a potential all-new compact car alternative that is attainable. It is the perfect embodiment of Ford's Go Further brand promise.

Today's unveiling of the Escort Concept is the latest example of Ford Motor Company's commitment to China, and follows the recent introduction of the new Mondeo and at Auto Shanghai 2013, and the latest launches of the all-new EcoSport and Kuga.

Since 2006, Ford has invested a total of $4.9 billion in China. The company's presence in the region will only continue to grow.

By 2015, Ford plans to launch seven new plants in Asia Pacific – five in China – and have the ability to produce 2.7 million vehicles a year in the region.

Less than a year ago, Ford announced that as part of its largest expansion in 50 years the company would build a new state-of-the-art assembly plant in Hangzhou and double its production capacity in China to over 1 million passenger cars annually by 2015. Ford and its joint venture Changan Ford are investing $760 million in the plant.

The Hangzhou investment is in addition to a $1.1 billion investment the company made to expand capacity at its Chongqing facilities including at Changan Ford Assembly Plant No. 2, the plant that makes Focus in China.

Ford also has been expanding its dealer network in China and further developing its supply chain to deliver 15 vehicles by 2015.