The G-POWER TYPHOON has arrived! With its breathtaking wide-stance styling, its 525-hp / 386-kW G-POWER SK III eight-cylinder supercharged engine and a top speed of 275 km/h the SUV based on the BMW X5 (E70) sets new standards in its class.

Muscular fender flares and strikingly styled aprons and spoilers front and back, all designed for maximum aerodynamic efficiency, dominate the appearance of the G-POWER TYPHOON. The body conversion components and the tools to make them were developed by the G-POWER designers using the latest CAD technologies. The entire base car was scanned in-house using a 3D scanner. The TYPHOON components are manufactured in OEM quality from PUR-R-Rim plastics.

The curved G-POWER fender flares on front and rear axle come complete with matching fender liners and add seven centimeters to the width of the X5. They create the space necessary for extra-wide wheels and tires. The largest version features G-POWER Silverstone Forged Edition forged wheels in size 11Jx23 in front and in size 12Jx23 on the rear axle. These wheels were custom-developed for the TYPHOON. High-performance tires in size 315/25 ZR 23 front and back from development partner Michelin provide optimal traction and sporty handling. 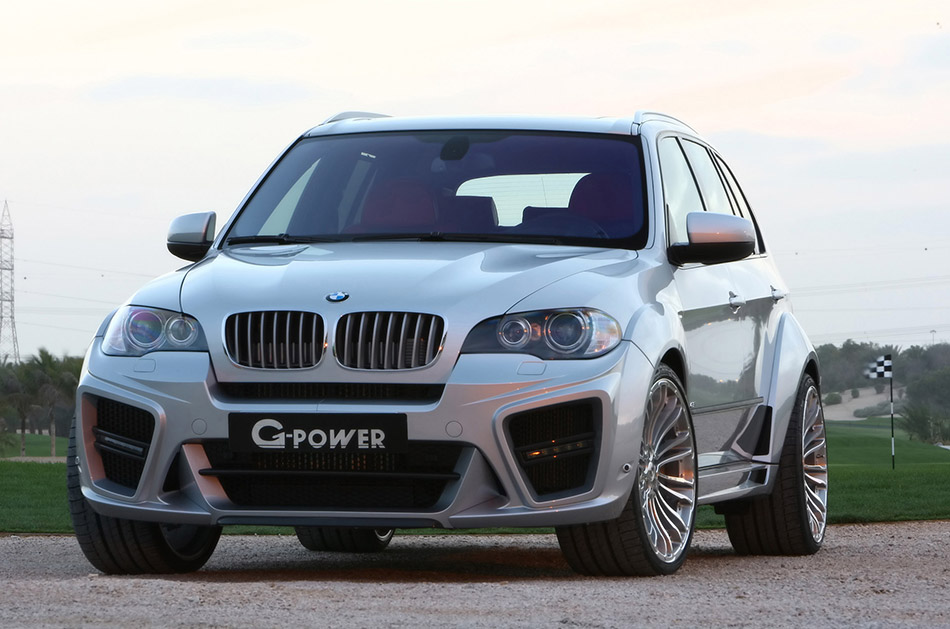 The G-POWER TYPHOON front apron dominates the face of the exclusive SUV aided by the wider fenders. Large air ducts not only improve the vehicle's passing clout, they also optimize cooling of engine and front brakes. Its sophisticated shape also reduces aerodynamic lift on the front axle. Like its counterpart in the front the TYPHOON rear apron was designed to replace the production bumper in its entirety.

The rear appearance is characterized by the two tailpipes of the stainless-steel G-POWER sport rear muffler, each measuring 114 mm in diameter, and by the rear diffuser. In combination with the rear spoiler attached to the liftgate the diffuser reduces lift on the rear axle. The rear spoiler also stretches the vehicle's roofline visually. The TYPHOON rocker panels create an aerodynamically favorable transition between front and rear fender flares. They also feature five blue LED lights each, integrated into their undersides, which are activated by the vehicle's keyless fob or by pulling on a door handle. They illuminate the ground on either side of the vehicle. The tops of the rocker panels feature integrated stainless-steel inserts with blue illuminated G-POWER logo. Another example for the sophistication of the G-POWER TYPHOON version for the BMW X5 is the four-piece underbody paneling.

Befitting its dynamic appearance G-POWER offers a very powerful engine for the BMW X5 xDrive48i. In cooperation with ASA Engineering, a world-renowned engineering company and OEM supplier of high-tech superchargers, G-POWER has developed a supercharger system for the eight-cylinder four-valve engine. The G-POWER SK III compressor system increases power output of the 4.8-liter engine by 170 hp / 125 kW to 525 hp / 386 kW at 6,100 rpm and boosts peak torque to 600 Nm at 5,300 rpm, up from 475 Nm. An ASA T1-521 hd supercharger with centrifugal clutch is flanged to the engine using a CNC-milled high-strength mount. The compressor is driven by the crankshaft via a cogged belt. It is lubricated by its own oil circulation integrated into the engine's oil circulation system. Boost pressure is limited to 0.6 bars. A two-piece carbon-fiber intake manifold with large free-flow cross sections, a generously dimensioned aluminum intercooler in the bow of the X5 and the fully stainless-steel G-POWER SPEEDFLOW high-performance exhaust with racing catalysts and rear muffler comprise the engine peripherals.

The engine itself is also modified extensively by G-POWER: Eight new injectors with higher fuel flow and new mapping for the engine electronics round out the engine conversion. The enormous power of the G-POWER SK III compressor engine in combination with the six-speed automatic gearbox and the xDrive four-wheel drive lend the SUV driving performance that places it squarely at the head of the pack: The powerful five-door sprints from rest to 100 km/h in just 5.0 seconds and reaches the 200-km/h mark after just 18.4 seconds. Top speed is 275 km/h.

The TYPHOON cockpit can be upgraded with exclusive accessories such as an ergonomically shaped sport steering wheel, a TYPHOON-design speedometer and a number of sporty aluminum accessories. Requests for an even more customized interior can be fulfilled with exclusive leather and Alcantara interiors in any color imaginable.