GLK – these letters awaken different associations. The ‘G' alludes to the archetypal cross-country vehicle, the ‘L' intimates luxury and, as in other Mercedes-Benz model series, the ‘K' stands for compactness. At first sight these three aspects may appear to be mutually incompatible. But on closer inspection, the concept vehicle Vision GLK FREESIDE offered the perfect approach to carrying Mercedes-Benz's SUV expertise into a whole new dimension. The study was presented at the North American International Auto Show (NAIAS) in Detroit in January 2008.

The Vision GLK FREESIDE combined typical SUV characteristics such as robustness and off-road capability with refined motoring characteristics on ‘normal' roads, where the AGILITY CONTROL suspension ensured exceptional handling dynamics and agility, coupled with exquisite ride comfort and pioneering active safety. A high-strength bodyshell formed the backbone of this model and ensured other key characteristics as well: driving stability, virtual absence of vibration and noise whatever the conditions, while the passive safety features were of the highest standard, typical for the brand. The comprehensive safety concept included front, side and window airbags, a driver kneebag and crash-responsive head restraints. 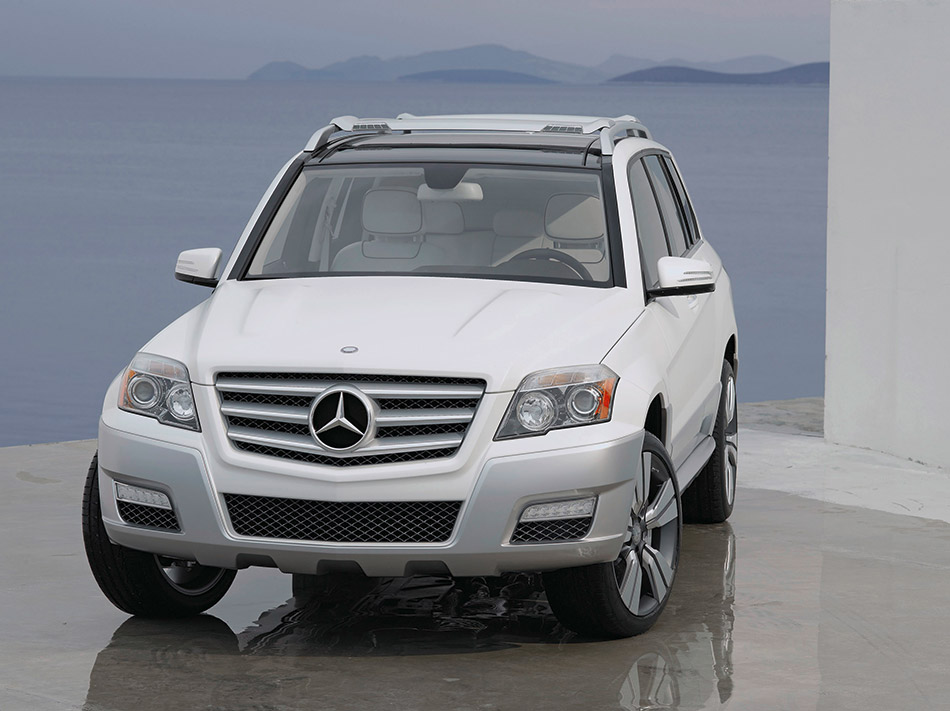 A four-cylinder diesel engine provided an appealing driving performance under all conceivable conditions, thanks to its 2.2-litre displacement and 125 kW output (170 hp). Among its particularities could be counted the fourth-generation common-rail injection system with an injection pressure of 2000 bar and a two-stage turbo-charging system. In the Vision GLK FREESIDE, Mercedes-Benz showed the BlueTEC exhaust gas purification system in combination with a four-cylinder engine – for the first time. The study thus showed a way for four-cylinder engine-powered vehicles, including compact ones, to meet the strictest emission standards. The engine combined with the seven-speed 7G-TRONIC automatic transmission.

In addition, the compact concept vehicle, with an exterior length of 4.52 metres, features technical details which had previously been reserved exclusively for higher vehicle classes. These include, apart from the PRE-SAFEÒ anticipatory safety concept and the ILS intelligent light system, the intuitive COMAND APS infotainment centre, a rear-seat entertainment system with two screens and the THERMOTRONIC three-zone automatic climate control system.

In terms of style the prospect of a compact, distinctive SUV model succeeded through the combination of the angular original design of the G-Class with typical design features from the contemporary Mercedes-Benz passenger car range. The clear design language with its bold interplay between taut lines and large expansive surfaces met with bodywork characteristics of a functional off-road vehicle such as short overhangs, upright front end, slender roof pillars, a steeply raked windscreen and taut roof lines. Specially manufactured 20-inch light-alloy wheels and muscular wheel arches lent the vehicle additional power and charisma. However, the bodywork design was by no means an end in itself: it made possible larger approach and departure angles as well as excellent ground clearance, and consequently, off-road driving as well. Good all-round visibility in conjunction with the raised seating position enhanced the vehicle's suitability for everyday on-road use, making for more relaxed driving even in dense city traffic.

The design concept of the Vision GLK FREESIDE was reinforced by the special effect: ‘Diamond White Magno' paintwork: here a matte clearcoat protects the surface. The detachable body parts, in high-sheen sterling silver, produced a charming contrast, lending the study vehicle an even more exclusive look.

The interior of the Vision GLK FREESIDE corresponded strikingly with the bodywork design, featuring premium materials as well as a coherent ergonomic concept. The dominant element here was the dashboard, lending the generous interior added width through its broad decorative elements that impressed with their emphatically three-dimensional design. The main focus was centred around an elegant trim tier in matte anthracite-coloured cebrano wood with white grain texture and a precision-tailored inlaid chrome strip. This element with its rich contrast, extended across the full width of the dashboard, dividing its main body into three horizontal planes. The upper area was trimmed in black leather and encompassed the instrument cluster and the central static COMAND APS display. The lower area, like the transmission tunnel and the footwells echoed the colour scheme of the exterior paintwork. The seats and the lower part of the door panels were trimmed in white leather, treated with a special coating process that gave it a matte gloss finish like that of the ‘Diamond White Magno' exterior paint finish.

Apart from the stunning visual effect, the treatment gave the natural leathers a velvety, skin-friendly easy-grip surface. Black piping added to the interesting black and white contrasts. The driver's armrest and the COMAND APS controller were both located in ergonomically optimum positions. Control of the individual menus was intuitive following the highly familiar control logic in the S-Class. Additional shortcut buttons simplified the access to the most important main functions.

The Vision GLK FREESIDE had a latest-generation 4MATIC all-wheel drive system which distributed drive torque in a ratio of 45 : 55 per cent ratio between the front and the rear wheels respectively, guaranteeing – in conjunction with the ESPÒ, ASR and 4ETS driving dynamics control systems – an effortlessly superior and predictable performance in all conditions, including optimum traction with the greatest driving stability. The newly-developed multiple disc clutch in the central differential assisted the system under conditions of particularly low friction between tyre and road, for instance on snow- or ice-covered roads. A basic partial locking torque of 50 newton metres between the front and rear axles resulted in a considerable increase in traction while maintaining unchanged the high level of driving stability.

The AGILITY CONTROL suspension of the Vision GLK FREESIDE resolved a conflict of objectives which particularly affected the SUV segment, where chassis engineers had the goal of creating a vehicle which was at the same time both sportily agile and comfortably smooth yet off-road-capable. If the focus is on sporty-active handling, the springs and above all, the shock absorbers, need to show a certain firmness which on the other hand bars the way to the desired brand-typical suspension comfort, and off-road capability. If on the other hand the vehicle is set up with softer dampers, trimming it consistently towards suspension comfort and off-road capability, dynamic handling naturally suffers. The solution found was the so-called ‘amplitude-dependent damping': the damping forces of the shock absorbers were not rigidly set, but configured to respond flexibly instead. In a normal driving mode on a moderately contoured road or on slow off-road tours the system responds softly, enhancing both the comfort of the occupants and the vehicle's off-road capability.

To ensure that this level of comfort is retained, even when applying a more dynamic style of driving or in the event of abrupt manoeuvres (e.g. when taking evasive action), in these situations the dampers deliver a harder performance, ensuring optimum driving stability. The driver of the Vision GLK FREESIDE is supported by speed-sensitive power steering which ensures the optimum steering force boost for the given situation. Parking or manoeuvring off-road become easy exercises because maximum steering power assistance is at hand. At higher speeds, on the other hand, assistance is reduced in favour of greater driving stability.

In the sum of its characteristics the Vision GLK FREESIDE signalled a breakthrough into a new dimension of compact SUVs. And it was a very realistic study: the corresponding series-production vehicle, model series X 204 Mercedes-Benz GLK, followed already in the summer of 2008.