Following up on the Ferrari F430 Spider, with its customized Lamborghini Spyder, HAMANN has now introduced a second top-class, open-top Italian racer into its tuning range. Like its cousin from Maranello, this sports car (with the bull in its logo) also stands out after being revamped at HAMANN with its racing flair and sportier look.

From a visual aspect, HAMANN lends the masculine, angular contours of the Gallardo Spyder an additional shot of testosterone. The extensive aerodynamics suite, which has been perfectly matched to the body of the "compact" Lamborghini, includes a downforce generating front spoiler, which is additionally equipped with an adjustable cup front spoiler lip borrowed from the racing scene. The muscular appearance of the Gallardo Spyder is enhanced by the HAMANN side sills – which also make the car look lower on the road, besides lending it a "fuller" appearance. Further features HAMANN borrows from the racing scene are incorporated into the rear end of the Gallardo. In addition to a three-piece rear spoiler, as an alternative, the Laupheim tuning specialist also offers a racing car-like rear wing, which helps to generate greatly enhanced downforce. The latter is given yet a further boost by being fitted with the HAMANN diffuser. All the components are available both in fiberglass and Carbon-Kevlar. The aerodynamics body-styling kit is rounded off by fiberglass covers, designed as a trim for the HAMANN 4-tailpipe rear muffler. 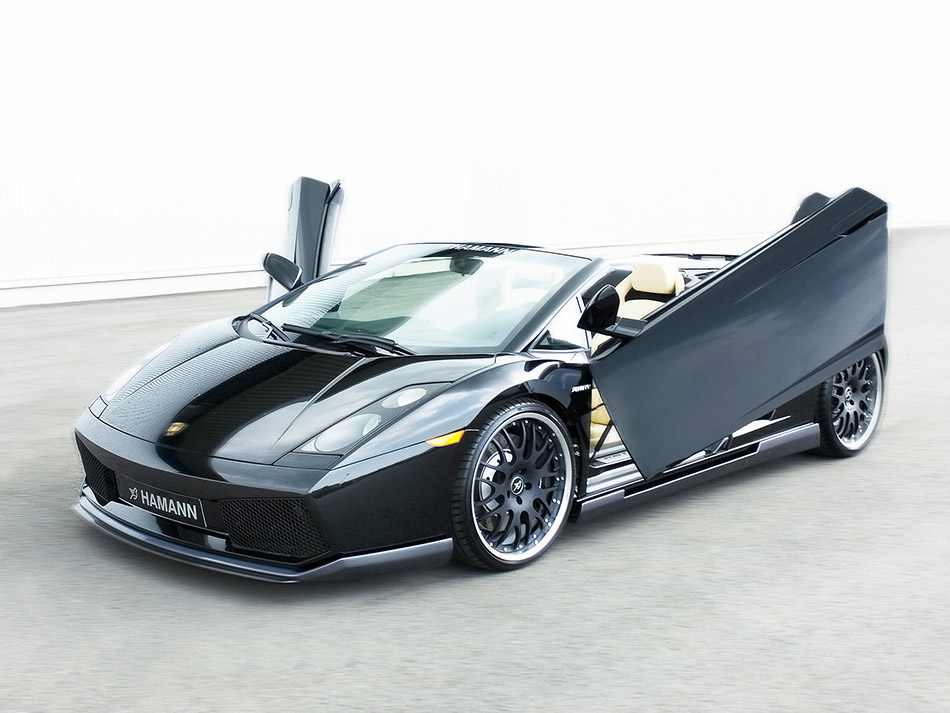 An even more profound modification to the body involves the fitting of the HAMANN in-house developed wing doors. The objective of the car customizer here was to design a stable, but relatively inconspicuous system. The hinges of the HAMANN wing door conversion are only just about visible, without giving the impression of having been retrofitted. This ensures that the Gallardo still cuts a fine figure when the entrance area is inspected. The conversion is performed at HAMANN and takes about a week. The HAMANN wing doors are characterized by the fact that they open upwards at an angle – as already seen in the models Countach, Diablo and Murciйlago on which they are based.

Needless to say, HAMANN also lends the Lamborghini Gallardo more power and performance. The car customizer has obtained this by fitting two types of sports rear mufflers – one version can be used in conjunction with the original tailpipes, thanks to the supplied adaptors, while the other version has four tailpipes each with a 76mm diameter – from V2A stainless steel. When fitted in conjunction with HAMANN sports metal catalysts, they increase both the bhp/kW values and the torque. For the Lamborghini Gallardo, HAMANN is also offering the option of recalibrating the standard ECU coupled with optimized mapping. This leads to an increase in power of 30 bhp / 22kW (series 520 bhp / 382 kW) and a 40 Nm increase in torque for this Italian powerhouse. The top speed increases by 6 to 320 km/h.

Drivers of fast cars are often underestimated by other road users. Precarious situations can often be defused safely by fitting better brakes. Accordingly, for the Gallardo Spyder and its hard-top variant, HAMANN offers sports braking systems both for the front and back. The braking system for the front consists of two slotted and inside-vented HAMANN brake discs in the dimensions 380 x 34 mm and two HAMANN eight-piston fixed caliper brakes in red (other colors optionally available). HAMANN equips the braking system for the rear with two slotted and inside-vented brake discs in the dimension 360 x 32 mm, two six-piston fixed caliper brakes in red and special handbrake linings.
Both sports braking systems are supplied complete with HAMANN special brake pads and HAMANN adapters along with all the fastenings.

Upon request, HAMANN can also upgrade the vehicle interior. For instance, this car customizer offers an 11-piece kit of decorative carbon-fiber trims. True to the motto of "Nothing's impossible", as you might expect, HAMANN designs the interior entirely to suit the customer's needs.