One of the most successful cars of its class is the BMW X5. BMW only recently introduced its latest successor and HAMANN has already put together a complete program for the new X5. Hardly any area has been left untouched. Whether its suspension, wheels, performance, interior or aerodynamics, the Laupheim German specialists provide clear individualisation launching far above the norm. Wide-body-parts arrange an especially brawny appearace, making the X5 become the HAMANN Flash.

New aerodynamic components are mandatory hence HAMANN begins with a new, wider front spoiler that lends the SAV X5 a significant powerful feature. In back HAMANN added a rear apron seizing the design of the front spoiler to match. Dazwischen bringt HAMANN die die Flash-Optik komplettierenden Kotflgelverbreiterungen an. Between front and rear, HAMANN adds fender extensions, which complete the wide body Flash looks. A further sporty accent shines through with the HAMANN roof spoiler, providing a stabilizing effect. It marks the icing on the cake of this extremely impressing Flash. 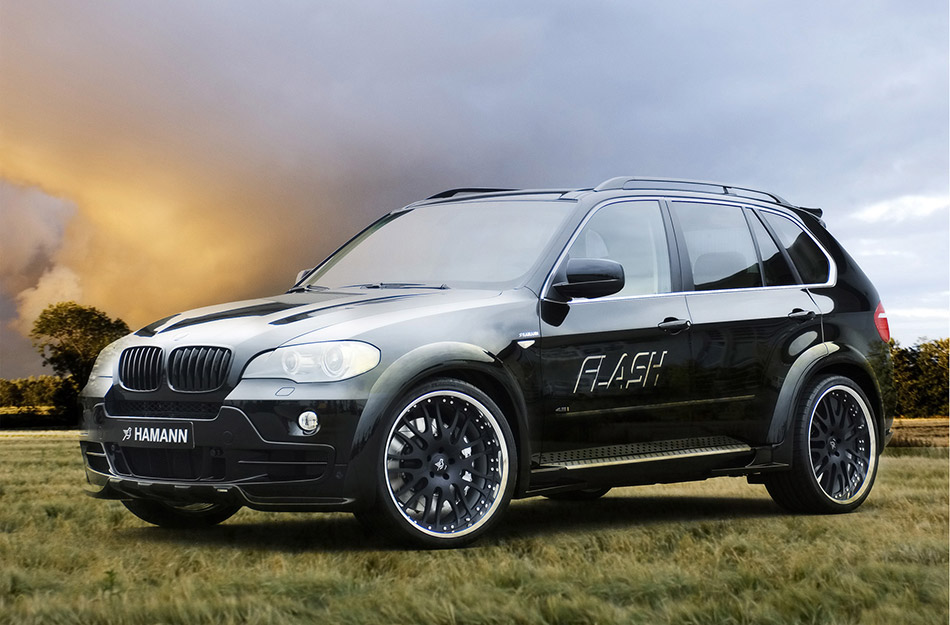 Not an easy choice!

Pondering over wheel choices will require the majority of customers time. Here are four designs of choice for the Flash including PG3, Anniversary I and II as well as Edition Race.

The noble tuners from Laupheim present a multi-pieced wheel PG3 available in silver finish with high-polished flange. Its characterized through the sporty five-spoke design.

The one-pieced wheel Anniversary I portrays a light footing with its multi-spoke design. HAMANN supplies these in silver finish with INOX stainless steel lip flange. The multi-pieced light alloy wheel Anniversary II exhibits a multi-spoke design as well projecting a feeling of pure motor sports. The silver rims with high-polished flange reflects both nobility and luxury simultaneously.
The appearance of the three-piece, ultra light forged wheels Edition Race in crossing spoke design and black wheel spider is identified through its nine main spokes double-attached, branching and continually double-crossing towards the outside rim. Its stirring design becomes particularly noticeable through Titan studs. The high-polished flange is icing on the cake to complete this luxurious look.

PG3 and Anniversary I are available through HAMANN for the X5 in 20 and 22-inch, Anniversary II in 22-inch and the wheel Edition Race comes in an impressive 23-inch. Naturally HAMANN offers the wheels in form of complete wheel sets.

By using a set of progressive suspension springs, HAMANN reduces the center of gravity for the X5 . For those vehicles that have level regulation, it is lowered to about 40 mm in front, and for vehicles without level regulation or air suspension to about 40 mm in front and about 30 mm in back. Through this, the X5 receives a bit of agility back which, in contrast to its predecessor model, had suffered somewhat due to its bigger size.

The specifically developed HAMANN brake system for the front axle with slotted and ventilated brake discs sized 405x34 millimetres, aluminium disc chamber, sports brake linings and steelflex brake pipes. The six-piston fixed calliper disc brakes in silver complete the system and apply a powerful grip. At the rear axle an four-piston brake system with slotted and ventilated brake discs sized 345x28mm plus the same hardware as above support the system working at the front.

The growling thunder matching the name Flash is generated by a HAMANN-exhaust system. It consists of sports headers (gas engine), sports metal catalytic converters (gas engine) and a sports rear silencer. Last mentioned can be ordered either as 2-pipe (oval, 145mm in diameter) or as 4-pipe-variant (round, 76 mm diameter) made from stainless steel.

Large vehicles such as the BMW X5 are tailor-made for travel. Due to this, HAMANN also modified the interior. Travellers should have the drive be as comfortable as possible and additionally should provide a feast for the eyes. HAMANNs accessories such as an exclusive foot mat flooring in black, a foot pedal of aluminium or even an aluminium foot rest enhance the cockpit of the X5. Naturally HAMANN also modifies each BMW X5 for personalized customer requests. For example, extravagant leather decor is available in a variety of colours or an elaborate multimedia alterations including DVD, TV and Play station.