Honda Motor Co., Ltd. held a demonstration drive of the next-generation FCX Concept fuel cell vehicle. The FCX Concept features a newly developed compact, high-efficiency Honda FC Stack as well as a low-floor, low-riding, short-nose body. It offers a comfortably large cabin and futuristic styling along with significant improvements in power output and environmental performance. Limited marketing of a totally new fuel cell vehicle based on this concept model is to begin in 2008 in Japan and the U.S.

To meet Honda objectives for significant gains in both environmental and driving performance, the FCX Concept is equipped with a V Flow1 fuel cell platform consisting of a compact, high-efficiency fuel cell stack arranged in an innovative center-tunnel layout. This has allowed designers to create an elegant, low-riding, sedan form that would have been difficult to achieve in a conventional fuel cell vehicle. This new fuel cell stack is 20 percent smaller and 30 percent lighter than the current FCX FC Stack, yet its power output is 14kW greater. The drive motor has been positioned coaxially with the gearbox for a more compact design, with output increased by 15kW. Overall, the power plant is about 180kg lighter than that of the current FCX and about 40 percent smaller in volume. The result is improved energy efficiency and performance along with a more spacious interior. 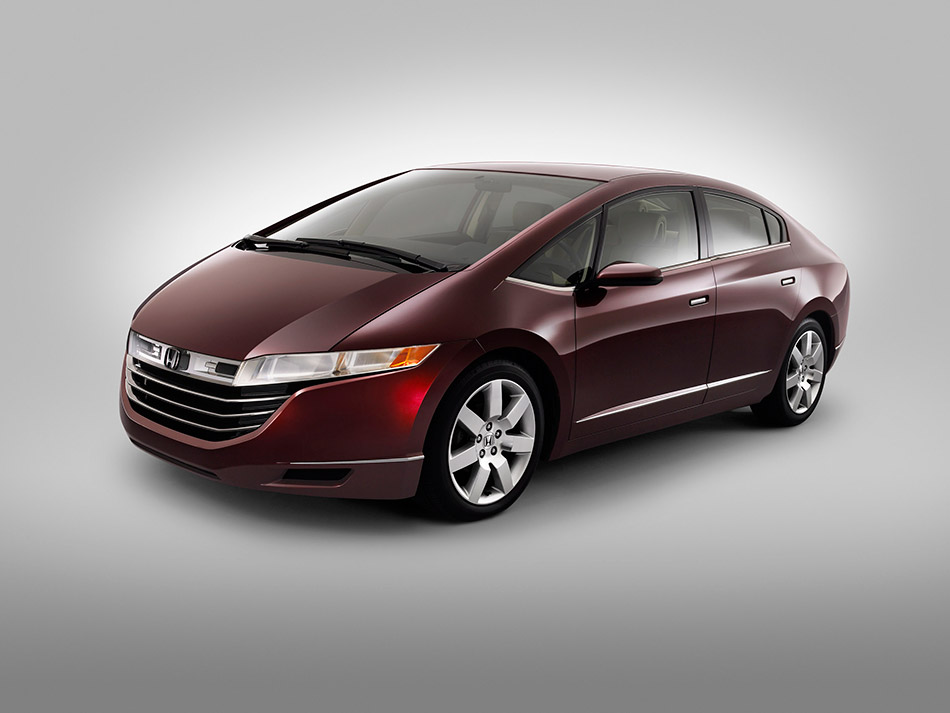 While with previous fuel cell stacks the hydrogen and the water formed in electricity generation flowed horizontally, the new FCX Concept features vertical-flow design. This allows gravity to assist in discharging the water that is produced, resulting in a major improvement in water drainage, key to high-efficiency fuel stack performance. The result is stable power generation under a broad range of conditions, and higher output from a smaller package. Low-temperature startup has also been significantly improved, enabling cold-weather starts at temperatures 10oC lower than the current FCX -- as low as minus 30oC.

As an auxiliary power source, the FCX Concept carries a compact, high-efficiency lithium ion battery, contributing to increased power output and a more compact power plant. These efficiency improvements to major power plant components give the vehicle a travel range approximately 30 percent greater than the current FCX. The vehicle is also highly efficient, with an energy efficiency of around 60 percent -- approximately three times that of a gasoline-engine vehicle, twice that of a hybrid vehicle, and 10 percent better than the current FCX.

Other features include seat upholstery and door linings made from Honda Bio Fabric, a plant-based material that offers outstanding durability and resistance to sunlight damage. Other improvements such as Shift-by-Wire and a newly designed instrument panel with easy-to-read display of hydrogen fuel consumption facilitate improved ease of operation.

The new fuel cell vehicle currently under development for release in 2008, will feature the principle technologies of the FCX Concept to achieve a new dimension in environmentally friendly driving pleasure not found with gasoline-engine vehicles.