Customers globally will start seeing this sleek, small SUV this year, too. Named the Ford Kuga in Europe and China, this vehicle made its international debut at the Geneva Motor Show in March and will offer unique powertrains and features for customers in those markets

The Ford Escape, America's best-selling SUV, raises the bar even higher with the all-new model that includes 11 new exclusive features and fuel economy projected to top any vehicle of its kind on the market today.

"We call our all-new Ford Escape the ‘smarter utility vehicle' because it offers the strengths that customers today really value – fuel economy, versatility and new technology that makes driving and living with the vehicle easier and more fun – all wrapped in a sleek, more modern design," said Raj Nair, group vice president, Global Product Development. "Ford understands that more people every year are looking at vehicles like Escape, and we want to give them even more reasons to buy." 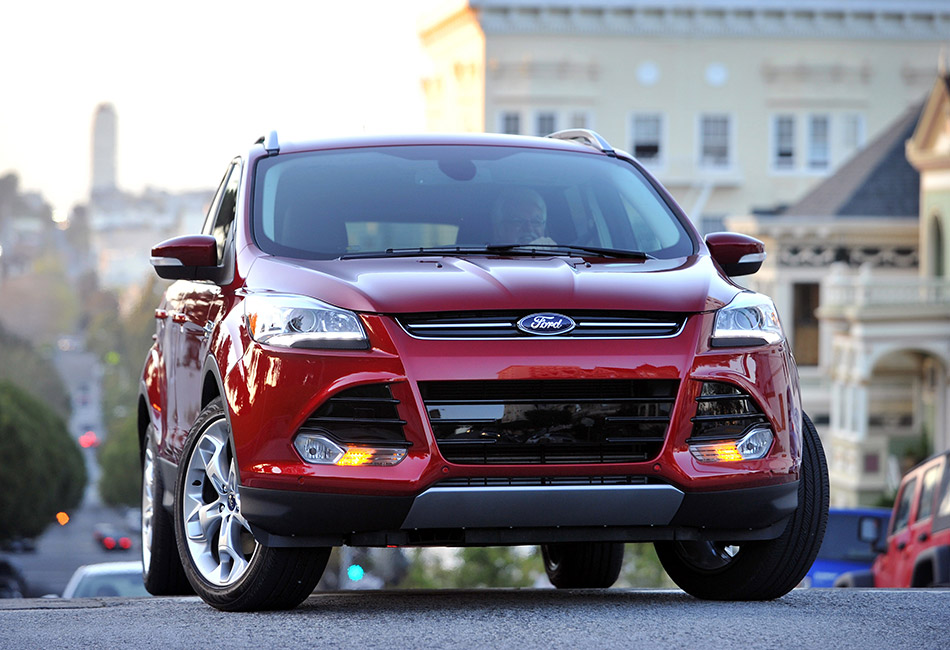 Sixty percent of Americans shopping for a vehicle this year will look at either a midsize car or small SUV, making Escape part of one of the most cross-shopped and fastest-growing segments in the auto industry.

"Escape is America's best-selling utility vehicle, and the Ford team has worked hard to make sure we deliver even more of what small SUV owners really want," Nair said.

In addition to more cargo volume behind the first and second rows than the current vehicle, the new Escape delivers:

11 features no other small SUV offers

Clever technologies that make Escape even more versatile, including an available hands-free power liftgate that allows quick and easy access to cargo with the kick of a foot
Projected best fuel economy of any compact SUV Driving dynamics that make the drive experience more engaging on-road and a new Ford Intelligent 4WD System that provides even better traction off-road
Sleek new design, with better interior materials and more finishing touches

An array of clever technologies adds to the new Escape's versatility, helping make life easier for its owners. Key features include:

An available hands-free power liftgate brings new technology to the SUV market and is enabled by motion technology used in today's video game systems. A gentle kicking motion under the center of the rear bumper activates, unlocks and raises the liftgate when the driver has the Escape key fob. This allows quick and easy access to the cargo area without needing to set down packages or dig out keys. The same process closes the hatch
SYNC® with MyFord Touch® offers multiple ways for customers to manage and control information through voice commands, menus accessed through controls on the steering wheel, touch screens, buttons or knobs.

Parallel parking the Escape is virtually stress-free with active park assist. With the press of a button, the system detects an available parallel parking space and automatically steers the vehicle into the space. Drivers control only the gas and brake pedals

Maneuvering parking lots and traveling open roadways becomes even safer and less stressful with Escape's sensor-based BLIS® (Blind Spot Information System) with cross-traffic alert. BLIS sounds an alert when a vehicle is detected entering a blind spot. Cross-traffic alert warns if traffic is detected approaching from the sides, such as when Escape is leaving a parking space in reverse

The all-new Ford Escape is the first Ford SUV to combine class-exclusive technology to automatically slow the vehicle when it's cornering too fast (Curve Control) or help accelerate through a turn (Torque Vectoring Control); a new Intelligent 4WD System helps deliver outstanding handling on pristine pavement and in adverse conditions as well, along with excellent traction off-road

Both new engines combine EcoBoost's core technologies of direct fuel injection and turbocharging and add twin independent variable camshaft timing (Ti-VCT) to deliver even better miles per gallon and save customers money on fuel. The 2.0-liter offers 240 horsepower and 270 lb.-ft. of torque, while the 1.6-liter provides 178 horsepower and 184 lb.-ft. of torque.

In Escape, EcoBoost engines are mated to a specially calibrated, six-speed SelectShift Automatic® transmissions, which is standard and allow drivers who want more hands-on experiences to manually control gear selection from a switch on the left-hand side of the shifter.
The gearbox features a new torque converter for improved driving feel, silky smooth shifts and even better fuel economy. Engineers also installed revised gear ratios for a balanced driving feel in all situations.

The standard engine in North America is an updated 2.5-liter (with 168 horsepower and 170 lb.-ft. of torque), giving the new Escape a comprehensive lineup of four-cylinder offerings. It also is matched to a six-speed SelectShift Automatic transmission.

Plus, the new Escape's active grille shutter system, which is on all models with the 1.6-liter EcoBoost and 2.5-liter four-cylinder engines, reduces wind resistance. Grille slats stay open when extra engine cooling air is required, such as low-speed stop-and-go driving. When cruising on the highway at steady speeds, the grille slats automatically close to improve aerodynamics and fuel efficiency.

Stowing and towing are even easier in the new five-passenger Escape, thanks to a low liftover height of 27 inches, more innovations and cargo volume that surpasses the outgoing Escape – with 68.1 cubic feet of space behind the first row and 34.3 cubic feet behind the second row.

The new Escape's rear seats have been designed to fold flat easily. With the touch of a button, the head restraint folds down and with the lift of a handle on the seat, the seatback folds and dives as the seat folds flat and clicks into position.

Escape also features an available two-position load floor, which can be configured to allow the customer to choose among maximum luggage volume or flat load floor.

When properly equipped, the all-new Escape maintains a trailer tow rating of 3,500 pounds with the 2.0-liter EcoBoost engine.

The system uses all the sensor inputs to turn the vehicle in the direction the driver wants it to go. Intelligent 4WD builds on the pre-emptive actions by adding and subtracting torque as needed through an electromagnetic clutch.

"This all-new Ford model opens a new chapter in the world of SUVs," Nair said. "By being smarter, this utility vehicle will help customers around the globe find better, easier ways to connect with technology, maximize fuel efficiency and find the versatility and capability they need and want."