A prototype of the next-generation Honda Pilot is being unveiled at the 2008 North American International Auto Show (NAIAS) in Detroit.

"The Pilot's pioneering formula improves for 2009 by enhancing its combination of refinement and efficiency with even more traditional SUV strengths," said John Mendel, executive vice president of American Honda. "A powerful exterior design communicates strength and allows for more space inside."

Functional eight-passenger seating, a hallmark of the Pilot, becomes even easier to access in the third row as key dimensions for legroom, cargo and occupant space increase in all seating positions. A redesigned platform allows even more refined handling and ride comfort to exist seamlessly with all-weather and medium-duty off-road capabilities. 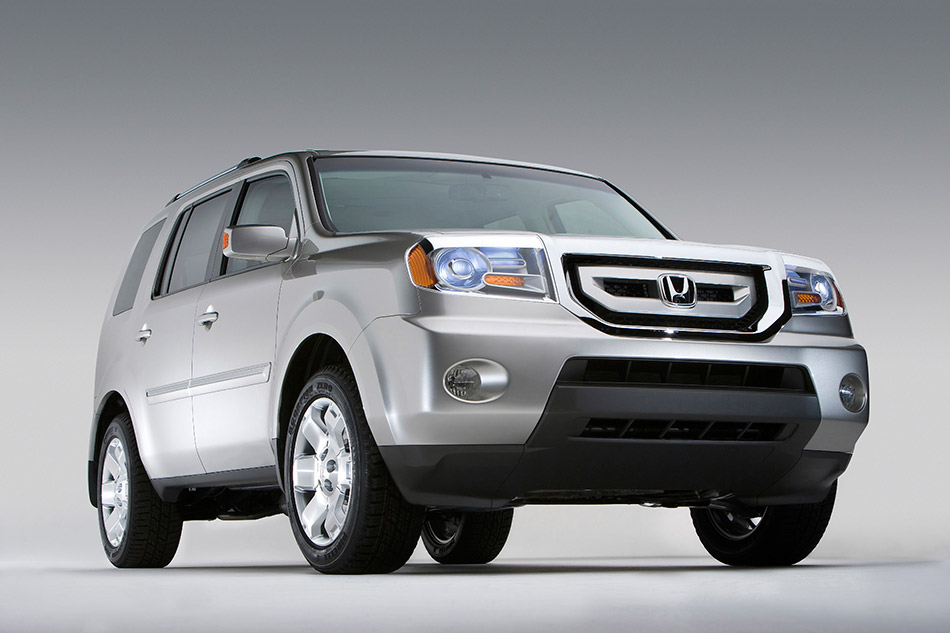 To further enhance safety, the Pilot will feature the Honda-exclusive Advanced Compatibility Engineering™ (ACE®) body structure and the most extensive use of high-strength steel in any Honda product to date.

The ACE body structure enhances frontal collision compatibility with vehicles of different sizes and bumper heights. A pedestrian injury mitigation design in the front of the vehicle is designed to help absorb energy in the event of a collision.

A crossover SUV platform underpins the Pilot to provide the best of the car and truck worlds by integrating the refined traits and packaging advantages of a unit body car design with the utility and capability of an SUV design. A V-6 engine introduces the latest generation of Honda fuel-saving Variable Cylinder Management™ (VCM®) technology that operates in 6-cylinder mode for power and 4- and 3-cylinder modes for efficiency, an improvement compared to the existing Pilot's available VCM system that works exclusively in 6- and 3-cylinder modes.

Three rows of seats provide a high degree of adaptability for people and large cargo loads. The first row provides a commanding view of the road from two captains' chairs. A wide center stack and center console form the styling anchor for the interior with a design that emphasizes spaciousness and power, while allowing for convenient access to navigation, entertainment and climate-control systems.

The 60/40 split second row, now more spacious, slides further forward for increased ease of access to the third row. The 60/40 split third row, now supplies enough knee room for an above-average-sized adult male to fit comfortably, making the Pilot's third row among the most practical in the industry. Each side of the second and third row independently folds down for cargo. A flat floor is created when the second and third rows are folded down.

The Pilot originally debuted as a 2003 model in July of 2002. Design and development of the 2003 Pilot and the 2009 Pilot were carried out at Honda R&D Americas in Raymond, Ohio, and Torrance, California. The Pilot is assembled at Honda Manufacturing of Alabama in Lincoln.

Among its numerous accolades, the Honda Pilot has earned Car and Driver Magazine's prestigious "5Best Truck" award on six consecutive occasions (2002-2007). The current-generation 2008 Pilot is also among an elite group of vehicles to receive both a "Top Safety Pick 2008" from the Insurance Institute for Highway Safety (IIHS) and a 5-star crash safety rating for frontal and side collisions from the National Highway Traffic Safety Administration (NHTSA).