The 2013 Honda CR-Z goes on sale in the US on November 21, 2012, with a host of powertrain, styling and feature upgrades adding to its sleek appeal and sporty handling. More power from an all-new Lithium-Ion battery pack improves performance while also improving the CR-Z's already impressive EPA mpg ratings. Styling upgrades include revised interior trim along with a new front fascia, a new finish for the 16-inch alloy wheels, an aerodynamically functional new rear diffuser and two new exterior colors - Passion Berry Pearl and Polished Metal Metallic.

The improved horsepower and torque on the 2013 Honda CR-Z does not come with a fuel-economy penalty, as the new, more powerful Lithium-Ion battery pack helps boost EPA-rated fuel economy figures by 1 mpg city for CVT equipped models, and 1 mpg highway for CR-Z models equipped with the six-speed manual transmission. 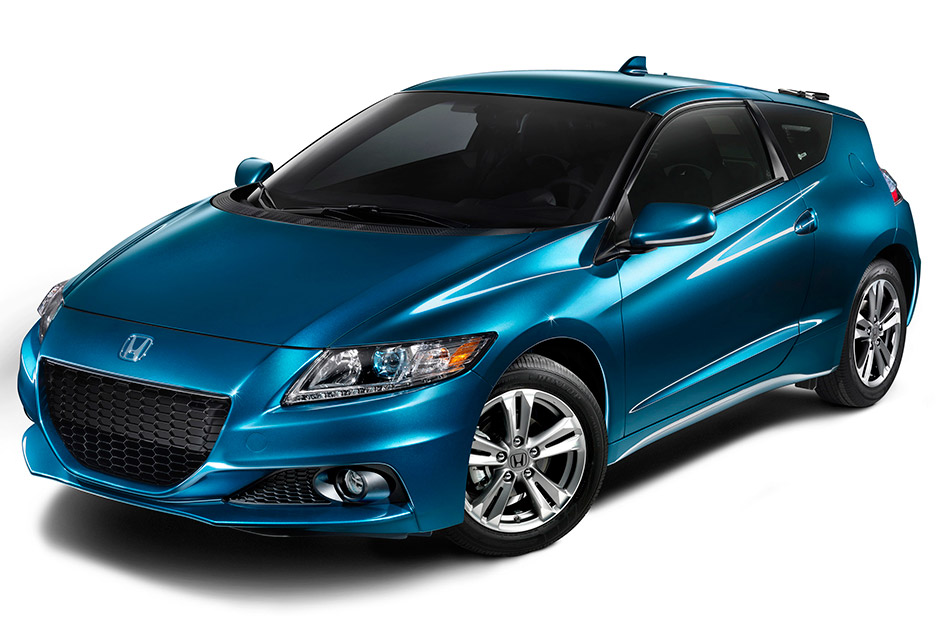 The hybrid CR-Z's electric motor assists in acceleration and also acts as a generator during braking or coasting to capture kinetic energy that recharges the new Lithium-Ion battery pack. The gasoline engine can automatically turn off during vehicle stops to improve efficiency. When starting on steep inclines from a stop with the manual transmission, hill start assist temporarily prevents the vehicle from rolling backwards during the moment between releasing the brake, depressing the throttle and releasing the clutch.

For 2013, assist from the electric motor has jumped from 10 kW to 15 kW, thanks to the new higher voltage (144-volt) Lithium-Ion battery pack. The CR-Z now delivers a combined peak output of 130 horsepower at 6000 rpm and 140 lb-ft. of torque (127 lb-ft. on CVT-equipped models), a gain of eight horsepower and 12 lb-ft of torque (4 lb-ft on CVT equipped models). Manual-transmission versions also receive both a larger clutch and a new lower final drive ratio.

Even with better performance, EPA fuel economy ratings for the 2013 Honda CR-Z have improved. On CVT-equipped models, the EPA city/hwy/combined rating is up 1 mpg city to 36/39/37 mpg, while models equipped with the 6-speed manual transmission see an EPA mpg rating of 31/38/34, a gain of 1 mpg highway. The Honda CR-Z is also rated as an Advanced Technology-Partial Zero Emissions Vehicle (AT-PZEV) in states that adhere to California Air Resource Board (CARB) ZEV standards (EPA Tier 2, Bin 2 in all states).

To help drivers make use of this improved performance, a new Plus Sport System is standard on the 2013 Honda CR-Z. If the battery is more than 50 percent charged and the CR-Z is traveling over 19 mph, the driver can activate this feature using the "S+" button on the steering wheel. When activated and the accelerator is pressed, electric boost begins, delivering increased acceleration for up to five seconds. A flashing gauge on the dashboard indicates when the Plus Sport System is active. The Plus Sport System can be used in Econ, Normal or Sport modes.

Activated via three backlit buttons to the left of the steering wheel, the CR-Z's 3-mode drive system allows the driver to choose among three individual performance modes:

A high-tech appearance and intuitive controls define the Honda CR-Z's newly revised interior. For 2013, interior changes include new metallic trim on the door pulls and latches, center console, speaker grilles and lower steering-wheel spokes. The inner door panel has been redesigned to provide easier access to the storage space, with the horizontal bar on the speaker housing eliminated, and a bottle holder added to the pocket. The door-pad trim has also been upgraded with a new, more upscale lamination. For 2013, CR-Z EX and Navi trims will provide an all-new black and red interior trim combination that adds new two-toned combi seats, and colored accents to the door panels and floor mats.

The Honda CR-Z's ultra-modern instrument panel gauges illuminate with a 3-dimensional blue color theme resulting in a multi-layered appearance. The upper portion of the dashboard extends toward the driver to provide a wraparound cockpit environment. Premium sport-oriented seats are designed to provide firm lateral support along with everyday driving comfort. A mid-ship console behind the front seats optimizes cargo space, and a hard-shell separator can be closed to create additional hidden storage.

The CR-Z features a 6-speaker, 160-watt AM/FM/CD audio system with an auxiliary input jack for connection to a portable audio player, and all models include a USB audio interface for connecting an iPod® or other compatible audio device. Other audio features include speed-sensitive volume control and CD/MP3 text readout. The radio data system shows supplemental programming information from participating radio stations while also offering search-by-genre capability (not available on the Honda CR-Z EX with navigation). Now standard, Bluetooth® HandsFreeLink® and a rearview camera further expand the CR-Z's appeal.

A Honda Satellite-Linked Navigation System™ is available on the CR-Z EX model and features a 6.5-inch screen and rearview camera display. For 2013, CR-Z EX Navi models add FM traffic, Pandora® and an SMS text messaging function. The navigation system database includes more than 7-million points of interest and integrates the audio system, while the voice recognition feature is capable of inputting numbers, street names and cities, in addition to more than 600 commands.