Hyundai Motor America today revealed the innovative HCD9 Talus, a 2+2 concept that previews the future of the sports car segment. Designed at the Hyundai Design Center in Irvine, Calif., Talus made its world debut at the North American International Auto Show.

"The mission for Talus was to create a vehicle that would excite the inner passion of customers who haven't been able to justify parking a sports car in their garage," said Joel Piaskowski, chief designer at the Hyundai Design Center. "It's for a person who has grown accustomed to the needs and benefits of an SUV, but desires the emotional gratification of sports car styling and performance."

Unlike a traditional sporty coupe, Talus can traverse steep driveways, potholes or two-track access roads thanks to its increased ground clearance. Talus also offers the performance of optional 4WD to assist in applying horsepower to the pavement or for added confidence in inclement weather. The increased ride height also improves visibility, giving the driver the ability to see and anticipate the road ahead. Talus includes interior room for four adults, plus cargo space for that impromptu weekend getaway. More space, ease of access and the benefits of a commanding ride height are unique advantages Talus brings to the sporty car market.

A sophisticated 4.6-liter V8 engine mated to a 6-speed automatic transmission delivers power to fit the demands of performance-oriented consumers. 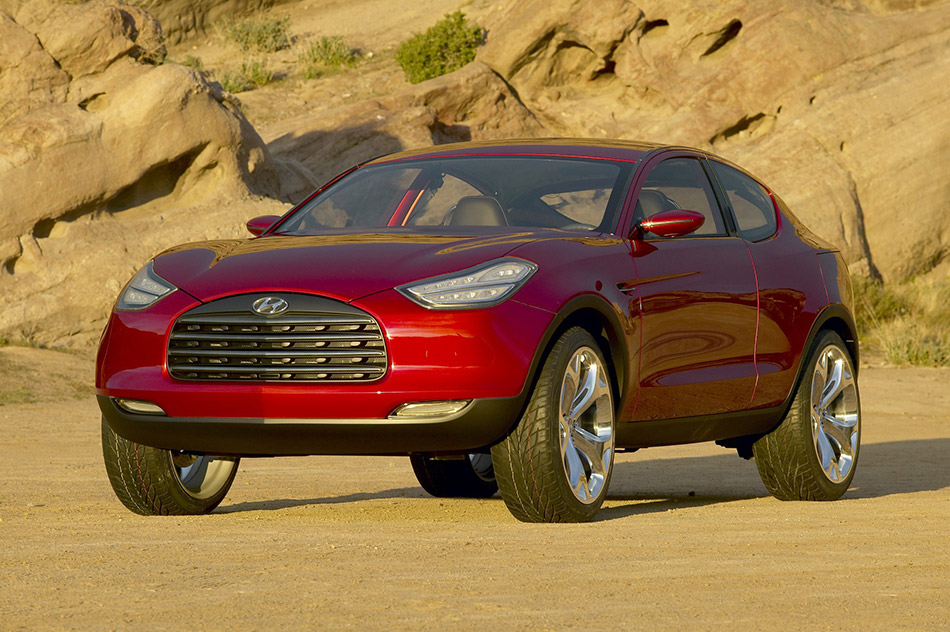 "The exterior design is very assertive and conveys confidence," said Eric Stoddard, senior creative designer. "It says Talus can do what it wants to; it opens your boundaries from a sports car perspective."

The powerful curves and surface detail of Talus come from the same underlying inspiration that guided the all-new Santa Fe. Talus shares a similar assertive expression in its front grille, headlamps and bodyside feature lines with its cousin, the 2007 Santa Fe. The hood forms are confident, emphasizing an extremely powerful V8 engine underneath.

Access into Talus' richly appointed cabin is made easier through its pillarless aperture supported by front-hinged doors and rear-hinged jump doors. The solenoid door release is integrated into the B-pillar allowing for a sculpturally clean bodyside.

There is a balance between passion and functionality at the rear of the vehicle. The undulating beltline adds intrigue while enhancing outward visibility for both the rear passengers and driver. A power clamshell hatch opens to a spacious cargo area and allows easy access from the rear and sides of the vehicle. The dual exhaust tips are integrated into the rear fascia repeating the design theme of the fog lights up front.
The exterior is finished in Molten Red metallic paint, selected as a refined evolution of bright red typically associated with sports cars. The body color is complemented with Cinder Black ground effects.

The HCD9 Talus concept is captivating and luxurious on the inside while providing great passenger and cargo versatility. The cascading metallic trim on the center console invites you to enter the Talus and explore the details and craftsmanship that were exclusively tailored into the interior. Blue LED lighting adds a harmonious ambience throughout the interior day or night.

"Sitting behind the wheel of the Talus will make you feel privileged and empowered by the luxurious appointments and higher seating position," said Dragan Vukadinovic, senior creative designer. "We wanted to push the expectations of the sports car interior by injecting as many luxury cues as possible. The center console was designed to be visually alluring while providing all the practical functions a driver expects."

The center stack was designed to look like a jeweled pendant hanging from a necklace. The necklace graphic defines a retractable hood that opens to expose a 10-inch LCD monitor, air vents and a clock capable of displaying time in three different time zones. Two control knobs that appear to be suspended from the necklace represent the jeweled pendant. Dual zone climate controls flank the tapering center console. Secondary audio controls are dedicated to the rear passengers to enjoy watching individual nine-inch DVD monitors mounted in the rear of the front seats.

The interior is finished in rich hues of supple leather. The palette consisting of Sierra Brown and Black Chestnut was selected to evoke the warm affluence of a western lodge, while the accented metallic finishes maintain a fresh technological outlook toward the future. The rear seats fold flat and there is a covered storage locker beneath the typical load floor for additional cargo space.