Hyundai i10 is set to become even more appealing from 2011, benefitting from a comprehensive series of enhancements to offer customers greater value for money than ever before.

This new and improved version of Hyundai's entry-point model represents a significant step forward compared with the outgoing i10, which has received consistent praise from press and public alike since its launch in 2008. By mixing unexpected quality with a high specification and affordability, the i10 helped drive a dramatic shift in the public's attitude towards Hyundai - it quickly became the brand's biggest-selling model in Europe in 2009, and has picked up numerous awards worldwide. Hyundai intends to build on its success with this refreshed 2011 model.

The latest Hyundai i10 offers a comprehensive series of improvements while retaining all the attributes that made it so popular in the first place. Chief among the changes are enhancements to the i10's design - both in the cabin and on the exterior of the car - which gives the latest model a more upmarket presence than any rival at a similar price point. These important design changes are in keeping with the brand's bold and progressing design language, bringing a clear family resemblance between the new i10 and other recently launched Hyundais, including the sleek ix35 and ix20 models.

A new and improved range of Euro V compliant engines blend clean performance with excellent fuel economy and ultra-low emissions. The latest Hyundai i10 introduces the all-new 1.0-litre 'Kappa' engine, which replaces the old 1.1-litre 'Epsilon' unit. This cutting-edge three-cylinder engine achieves a remarkable 67.3mpg combined: the sort of cheap-to-run credentials that will resonate with customers as the cost of motoring continues to rise. 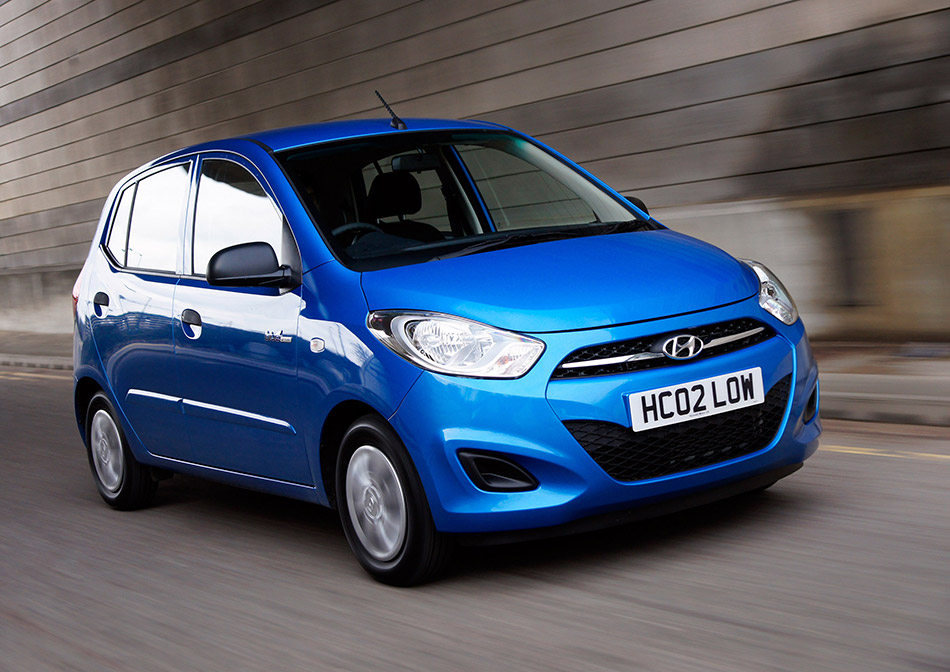 To make the most of this efficient new 1.0-litre engine, Hyundai has introduced an all-new model - the i10 Blue. This special 'eco' edition of the i10 emits an astonishingly low 99g/km CO2, so it gains exemption from VED and the London Congestion Charge. It is currently the only sub-£10k five-seater car on the market to achieve this, and the first of a family of Blue models that will underscore Hyundai's commitment to environmental technology.

Equipment specification across the Hyundai i10 range remains impressive, with usually optional features, such as air conditioning and the addition of an iPod plug-in, standard fit on all new i10s. As part of a class-leading equipment list, customers will also find four airbags, a six-speaker stereo, 14-inch wheels, electric windows and central locking all as standard on all models.

In ascending order, the trim levels are Blue, Classic, Active (which replaces Comfort for the 2011 model), and Style. Each trim level offers features and technology unheard of on a car at this price point, for example smart 14-inch alloy wheels and heated front seats on the Style trim. Choosing the right i10 is simple for UK customers too, with straightforward price gaps between trim packages and no hidden extras.

And, importantly, the Hyundai i10 still has the longest wheelbase in the class, meaning exceptional interior space - it's a full five-seater with room for luggage.

That long wheelbase also gives the ride and handling characteristics of a far larger car, meaning the i10 needn't just be confined to the city limits. Combined with a modern front and rear suspension design, electric power steering and all-round disc brakes, the i10's specification could embarrass some cars in the class above.

And of course all i10s come with Hyundai's world-beating five-year unlimited mileage warranty for total peace of mind. This has been extended for the new 2011 model to include Five Year Triple Care, which includes five years' roadside assistance and five years of vehicle health checks. It's an offer that is yet to be matched by any of Hyundai's rivals.

All in all it means that buyers who want a small car with small bills needn't put up with big compromises.

The Hyundai i10 may represent the entry-point to the Hyundai range, but it still has to look great. Hyundai has worked tirelessly to create a family of contemporary, modern and good-looking cars - a process that started with the groundbreaking i30, and the original i10.

The new i10 is no exception. It benefits from a series of cosmetic changes that bring a fresher, dynamic look. All of these alterations have been made to bring the i10 in line with Hyundai's evolving 'fluidic sculpture' design language. The new Hyundai i10's redesigned radiator grille, more angular headlights and new front air intakes are key among the changes. They combine to create a more hexagonal frontal form, which will be a signature feature on all Hyundai models going forward. A reshaped lower bumper and angular front fog light recesses complete the new front end.

The design upgrades continue on the sides and rear of the car, with new style wheels and redesigned rear lamps and bumper completing the new i10's contemporary and streetwise look.

An all-new version of Hyundai's 'Kappa' engine is one of the most exciting additions to the Hyundai i10 range in 2011, and will be available in the i10 Blue from launch.

What's most appealing about the new engine is its excellent fuel consumption figure of 67.3mpg combined. This compares favourably against the old entry-level Hyundai i10's 58.9mpg, and is beyond the capabilities of all other rivals at a comparable price point.

The new engine's CO2 emissions are astonishingly low, at just 99g/km. That puts the i10 Blue in VED Band A, which under current regulations means a free tax disc, as well as exemption from London's Congestion Charge scheme. All of this makes the Hyundai i10 Blue one of the cheapest cars to buy and run on sale today.

Yet despite its smaller capacity and frugal nature, the new 1.0-litre three-cylinder 'Kappa' engine offers a useful 68bhp - enough to reduce the i10 Blue's 0-62mph time by a whole second compared with the outgoing 1.1-litre. And given a top speed of 93mph, even the lowest-powered i10 won't feel strained keeping up with faster traffic at motorway speeds.

For those who require a little more flexibility and performance, but still want excellent fuel economy, Hyundai's 1.25-litre four-cylinder petrol engine is available with the option of a Classic, Active or Style trim. This unit, also a 'Kappa', was introduced on the previous i10 but has been significantly upgraded for the 2011 model.

Power has been increased to a very reasonable 85bhp (10bhp more than the old model) offering more performance and a truly nippy 0-62mph sprint of 12.3 seconds. The 1.25-litre Hyundai i10's top speed has also been increased to 105mph, making it more than comfortable at motorway or fast A-road speeds. Yet fuel efficiency and emissions are still extremely competitive, with manual versions of the 1.25-litre offering a remarkable 61.4mpg and emitting just 108g/km CO2.

Both engines in the i10 line-up further progress Hyundai's ambition of becoming the world's automotive leader in eco-friendly technologies. Company car drivers will also discover that they are only liable for 10% benefit-in-kind liability for the 2010/2011 tax year, meaning they could pay less than £13 a month to the Inland Revenue for having the car. For everyone else, with road tax and fuel prices rising in the UK, the i10 makes good financial sense whichever model you choose.

A more upmarket look and feel has been brought to the Hyundai i10's cabin with the new 2011 upgrades. It now offers an ambience comparable with cars from the class above, rather than a great value city car. In fact, the new i10's interior adopts cutting-edge features and design flourishes pioneered on other models further up the i-range.

A new instrument cluster offers striking blue illumination that gives the dials ultimate clarity. As part of these changes, an 'eco shift' indicator has been incorporated to advise drivers of the most efficient moment to change gear, meaning better fuel consumption and lower emissions. This blue illumination is carried over to all the dashboard screens, bathing the interior in a clean and clear ambient light during night driving.

Further upmarket touches include chrome-finished door handles and a chrome-finished gear knob, along with an optional leather steering wheel and handbrake, which help enhance the tactile appeal of the cabin. The standard seat trim's material and colour options have been upgraded with higher-end textiles and materials and a more subtle design. And, to stop the kids spilling their drink on this plusher cabin, there's now a useful rear cupholder for backseat passengers.

Even as recently as a decade ago, the standard equipment levels of the Hyundai i10 would be seen as truly generous on a large family car. Air conditioning, electric windows, 13-inch wheels, six-speaker stereo and four airbags would have been considered a strong package in a car costing £16,000. Hyundai is able to bring buyers all this in a car costing half this amount.

The fitment of air conditioning as standard across the range is a real highlight of the i10. It is increasingly seen as essential, not just to help you keep your cool in summer, but also to keep the windows free of mist in winter.

The company hasn't cut back in other areas either. There are four airbags, five seats, ISOFIX mountings, electric windows, colour coded bumpers, central locking, an integrated radio with MP3-compatiable CD player and that all-important USB and iPod plug-in as standard across the range.

This level of equipment is standard on the entry-level Classic trim, but for those who desire even more there are two further steps up the range.

At the top of the range, the Style now adds new chrome fascia door inserts, chrome interior door handles, a leather steering wheel, gear knob and handbrake, a rear roof spoiler and even heated front seats and an electric sunroof.

Each trim level has a simple 'step-up' to the next to make the choice straightforward for customers. Prices start from £8,195 for the entry-level Classic. The next step Active trim costs £600 extra. From there Style is a further £550 from Active.

All trim levels also have Hyundai's Five Year Triple Care package, which offers an unlimited mileage warranty, roadside assistance and free health checks as standard. That alone would cost hundreds of pounds if added to the purchase price of rivals.

Brand new to the 2011 model range is the Hyundai i10 Blue - the most fuel-efficient car Hyundai has ever produced.

This is Hyundai's first European production model to produce a sub-100g/km CO2 emissions figure. In fact, no other five-seat car in the sub-£10,000 price bracket achieves such impressive fuel economy or CO2 figures.

The Hyundai i10 Blue produces just 99g/km CO2 thanks to the introduction of the new 1.0-litre 'Kappa' engine and the addition of Hyundai's Blue Drive technology.

This includes ISG (Intelligent Stop & Go) - a system that automatically kills and re-engages the engine when the car is idling to save fuel - low-rolling resistance tyres, an alternator management system, and an 'eco shift' indicator to help the driver use the car as efficiently as possible.

A special 'Blue Drive' badge is fitted to mark the car out as one of Hyundai's most efficient, environmentally friendly models. This will appear on other Hyundais in the near future. Unlike rival models that are designed to maximise fuel economy, heavy but still important items such as the spare wheel have not been sacrificed from the i10 Blue in the pursuit of low emissions.

Hyundai intends to be a global leader in environmental technologies, and the Hyundai i10 Blue, as part of the Blue Drive initiative, will contribute significantly to a reduction in the company's European average emissions figure.

As this table illustrates, it is currently the only five-seat car on sale in the UK that achieves less than 100g/km CO2 and costs less than £10,000.