Infiniti's popular G35 sedan, which continues to set monthly and yearly sales records, raised the bar in class in 2004 with the addition of an advanced all-wheel drive model, the G35x AWD. For 2005, G35 takes another major leap forward with a redesigned exterior, a refined interior featuring a new instrument panel and console area and increased horsepower and torque for the standard 3.5-liter DOHC V6 engine.

Automatic transmission equipped 2005 G35 models receive an additional 20 horsepower and 10 lb-ft of toque, while the G35 sedan with 6-speed manual transmission model adds 38 horsepower (torque remains at 260 lb-ft). Other performance-oriented changes for 2005 include the use of larger standard brake rotors and the addition of 18-inch wheels and tires and viscous limited-slip differential to the Sport-Tuned Suspension Package.

"For 2005, our engineers and designers chose to ignore the old adage of ‘if it isn't broken, don't fix it' and greatly enhanced the desirability and driveability of the G35 sedan," said Mark Igo, vice president and general manager, Infiniti Division. "When we introduced the G35 two-and-a-half years ago we intended it to be the leading sport sedan in its class. As the changes for 2005 demonstrate, we're serious about maintaining that position again this year." 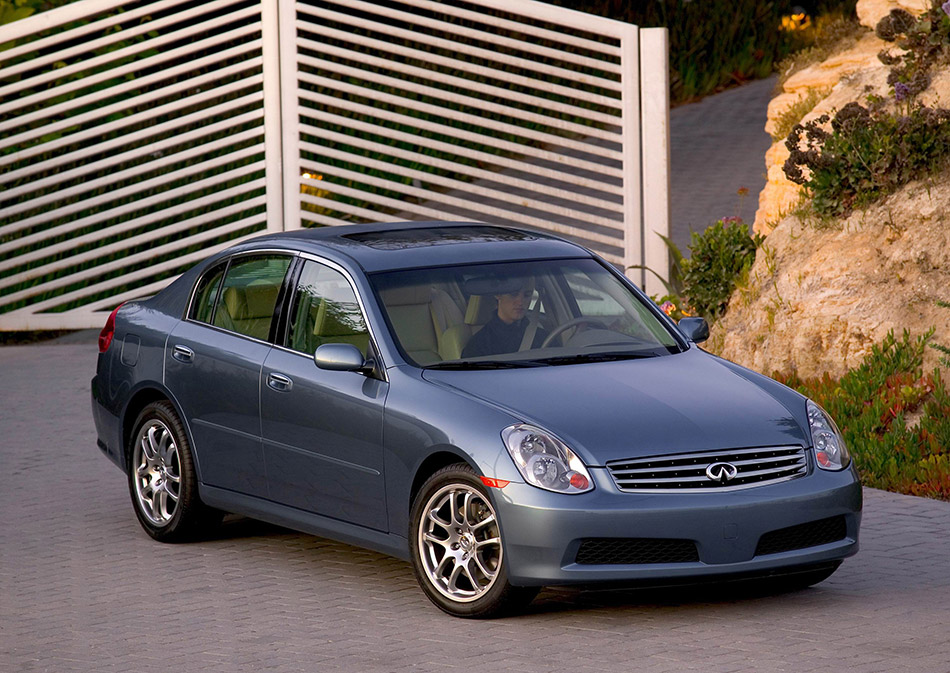 The most visible changes to the G35 for 2005 can be seen in the vehicle's redesigned exterior, which features a new hood and trunk, new front and rear bumpers, body-colored side sills, revised headlight lens and new dual circle taillights. Also featured are new 7-spoke 17-inch aluminum-alloy wheels.

A smooth visual line flows from the new front end and front fenders through the side profile, while the C-pillar and rear fenders accentuate the spaciousness of the cabin. The large greenhouse provides good visibility from all seating positions. The new rear fascia is highlighted by the redesigned rear combination lamps with LED taillights. The LED lights provide maintenance-free operation and bright visual recognition for following drivers during braking.

The 2005 G35 continues to utilize the racing technology-inspired FM (Front Mid-ship) platform, which mounts the engine behind the front axle in the "front mid-ship" position. The positioning of the engine is a key to the G35's high level of driving performance, providing a nearly optimized 54:46 (55:45 G35x) percent front-to-rear-weight balance. This layout also features a long wheelbase (112.2 inches) and short front and rear overhangs, providing a large interior for its highly manageable overall length (186.5 inches) and excellent interior space utilization. A wide front and rear track adds to the G35's overall handling stability and further enhances interior and trunk volume.

The FM platform design also places a strong emphasis on aerodynamics. The G35 has a coefficient of drag measurement of just 0.27 (0.26 with optional rear spoiler) for reduced wind noise and optimized fuel economy. The design also emphasizes the control of airflow under the body. The extensive use of diffusers and deflectors helps the G35 achieve zero front lift (0.0 clf), reducing drag and noise and contributing to vehicle stability. With the optional rear spoiler, zero rear lift is also achieved.

For 2005, the G35's interior offers a new, even higher quality look and feel, along with a redesigned instrument panel and console area. Materials and textures have been refined to provide a richer impression and the use of real aluminum and new wood-tone trim provides a degree of authenticity to the interior. Available wood accents (Wood Trim Package) have been revised from Bird's Eye maple to a straight-grained Rosewood and the application of wood trim in the interior has been expanded. A new Stone (gray) and Wheat (beige) interior colors join the previously available Graphite (black) to allow more choice for customers. Every 2005 G35 comes with standard leather-appointed seating.

"While still retaining the sporty character and solid ergonomics of the G35's interior, the refinements for 2005 clearly take the tactile elements of the design to the next level," said Igo. "It's a significant upgrade that owners are sure to appreciate."

Examples of the G35's combination of sportiness and comfort can be found throughout the spacious (98.0 cubic feet) interior. The driver's seat uses a special center mound shape with high damping urethane foam and special spring design to support the driver during sporty driving, while the front passenger's seat has a flatter-shaped lower cushion and the seat is shaped to provide a relaxed posture. In the rear, the G35 offers a choice of wide bucket-shaped seats or optional rear reclining seats, both with ample knee room, and a pass-through armrest. The G35 trunk measures a full 14.8 cubic feet of trunk space.

Enhanced Performance and Choice of Rear-Wheel or All-Wheel Drive

Since its introduction, the G35 has been noted for its outstanding balance of acceleration and handling. The heart of G35's performance is its standard 3.5-liter DOHC 24-valve V6, derived from the VQ engine series, which has been recognized as one of the "Ten Best Engines" by Ward's Auto World magazine for ten consecutive years.

For 2005, several modifications have been made including a new electronic exhaust valve timing, improved cooling and air flow and strengthening of several components, resulting in an increase of horsepower and torque to 280 horsepower (from 260 hp) and 270 lb-ft of torque (from 260 lb-ft) for models equipped with the advanced 5-speed electronically controlled automatic transmission with manual shift mode.

"Already one of the top performers in class and the recipient of numerous top rankings in enthusiast magazine head-to-head comparison tests, the 2005 G35's performance enhancements make a powerful statement about Infiniti's intention to not rest on our laurels," said Igo.

The system's advanced torque split control strategy automatically transfers optimum torque to the wheels according to road and driving conditions. It provides outstanding cornering capability similar to a sports car due to optimum torque distribution to the front and rear wheels (50:50 up to 0:100).

The system also provides high starting traction performance and smooth, stable acceleration, especially in snow-covered or off-road situations with the driver-selectable Snow-Mode switch, which allows the driver to fix the torque distribution ratio at 50:50 and reduces throttle sensitivity to improve performance at low speeds on slippery roads as desired.

"The ATTESA system provides the best of both worlds – the handling feel and quiet operation of a rear-wheel drive vehicle, with the sure-footed traction of all-wheel drive," said Igo.

The 2005 G35's high level of sporty handling is provided by a standard 4-wheel independent multi-link suspension design. The front suspension minimizes alignment changes through use of two separate lower links and a long upper link. The rear design separates the shock absorbers and springs, locating the shock absorber inline with the wheel center to help reduce suspension friction and reduce the wind-up motion of the axle on acceleration.

The 2005 G35 features standard 17-inch aluminum-alloy wheels with P215/55R17 tires on automatic transmission models and 18-inch aluminum-alloy wheels and P235/45R18 tires on the 6-speed manual transmission model. The 18-inch wheels and tires and Viscous Limited-Slip Differential are optionally available on all models as part of the Sport-Tuned Suspension package. A Tire Pressure Monitor System is standard on all 2005 G35 models.

The FM platform provides a number of innovative safety performance features, including a mechanism for releasing the engine downward in certain collisions, and a breakaway driveshaft helping prevent the intrusion of the engine into the passenger compartment and brake pedal construction that helps prevent rearward pedal movement and lower leg injuries.

The Aero Package, which is available with the Sport-Tuned Suspension Package or G35 6MT model, adds a rear spoiler with rear underbody rear side fairings. Other available options include a navigation system, genuine Rosewood trim and sunroof.