Playing to win in the growing crossover segment, Ford has joined with another iconic company to showcase how it could further expand its lineup of expressive crossovers with the Ford Airstream Concept.

"Crossovers are an increasingly important part of our business, and Ford is going to continue developing an expressive range of these vehicles," says Peter Horbury, executive director - Design, The Americas. "The Ford Airstream Concept is a futuristic look at crossovers. It's the ultimate modern touring vehicle that delivers flexibility and capability with dynamic design that evokes the spirit of the journey."

The concept is powered by a plug-in hydrogen hybrid fuel cell drivetrain - called HySeries Drive™ - that operates under electric power at all times. This advanced fuel cell system is half the weight and cost of today's fuel cells and can operate in the dead of winter. That's a major step forward because today's fuel cells don't do well when the mercury dips below freezing. 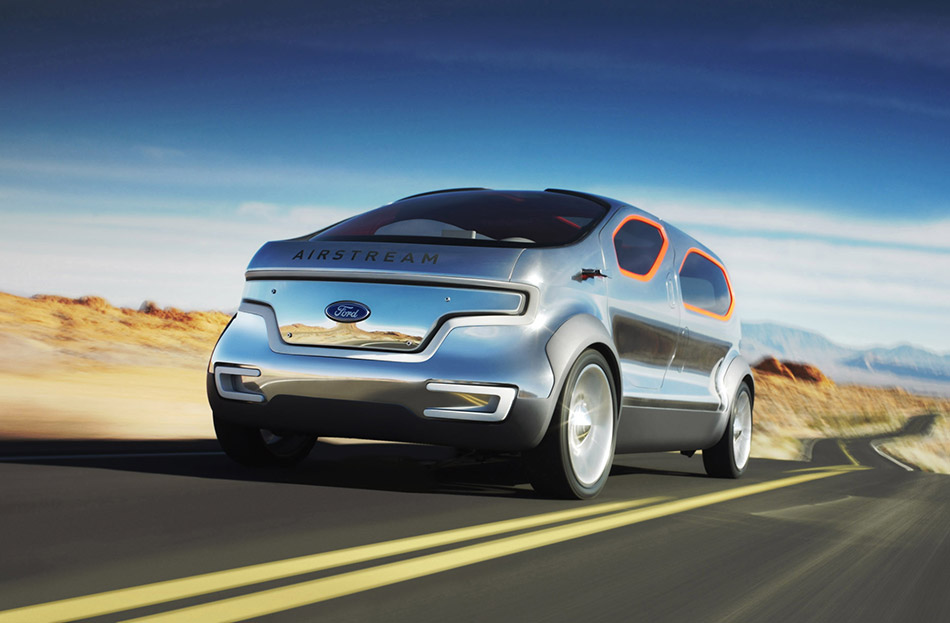 The Ford Airstream Concept captures the sense of optimism and adventure conveyed in American aircraft, spacecraft and the streamlined shape of Airstream trailers. It's reflected in the crossover concept's organic, fuselage-inspired form language, unique reflective paint and 12 ceremonial rivets, which pay homage to Airstream's iconic construction.

"For 75 years, Airstream has been an icon synonymous with the optimism, discovery and wanderlust that's helped defined America," said J Mays, group vice president - Design, and chief creative officer. "It seemed only fitting for us to come together through our shared passion for the open road and show a vision for the future of American transportation."

"Silver bullets" have been shooting up and down highways ever since, leading a Recreational Vehicle industry that's realized record profits and revenues in 2005 and the first half of 2006.

"Business for Airstream and the RV industry has been strong, but we want to continue finding options for tomorrow's road trips. Our success in recent years has come from challenging the conventional thinking about what an Airstream is. The Ford Airstream Concept is a stunning example of just that," says Bob Wheeler, president and chief executive officer of Airstream. "Plus, a partner like Ford, with its long history as an American icon, made perfect sense for this kind of exploration."

In the U.S., 11,000 people turn age 50 every day. These consumers are starting to downsize their lives and their vehicles, opting for more nimble and fuel-efficient models. With their children leaving home and some retiring, they also have more time for travel.

For Ford, that trend - plus younger couples starting families later - is fueling a shift to crossover vehicles.

The crossover segment is expected to hit 3 million units by the end of the decade, making it potentially the largest U.S. vehicle segment.

For Airstream, these demographic changes are meaningful as well. RV ownership is highest among retirement-age consumers, and by the end of the decade, 50- to 64-year-old consumers will tally
57 million - a 38 percent increase versus 2000, according to University of Michigan studies.
And the number of RV-owning households is expected to grow to 8.5 million during the same period. 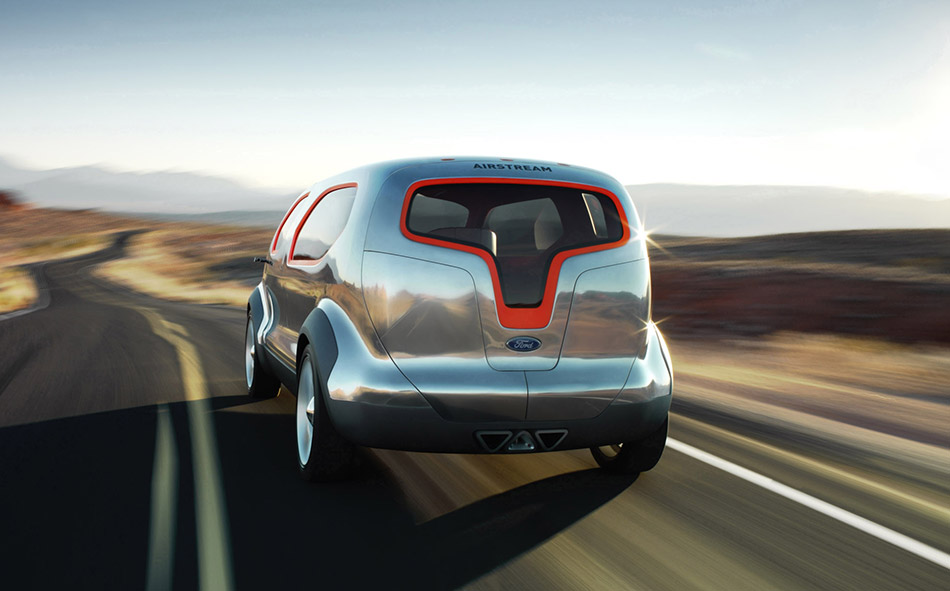 Growing Ford's crossover share means breaking through the competitive and fragmenting segment, and the company is leveraging bold designs to win customers.

Ford's crossover lineup already features the functional Freestyle, newly launched agile and modern Edge and, in time, will include a more refined full-size crossover based on the Fairlane concept.

Ford designers wanted to push further into the future and tapped inspirations including Airstream's iconic designs and the optimistic future Stanley Kubrick created and captured in his 1960s cult film 2001: A Space Odyssey. These inspirations are evident - inside and out.

The concept's bold, futuristic front-end explores a new look for Ford, encapsulating the single-surface grille and headlamps into the same graphic. Each of the concept's bold orange-trimmed window graphics is a unique shape.

"This reflects the purpose of the vehicle: looking out and remembering that the journey - not the destination - matters most," said Freeman Thomas, director, North American Strategic Design. "The Ford Airstream Concept is an ultra-modern, optimistic vehicle that allows passengers a pure traveling experience to enjoy with good company, no matter the destination ."

Its doors are asymmetric as well, allowing for easy loading of passengers and cargo. In addition to the driver's side hatch, the passenger side features a power clamshell door that runs two-thirds the length of the vehicle. A three-door hatch finishes the rear of the crossover.

The futuristic theme and modern form language of the exterior carries through to the concept's interior.

"Through the materials, color palette and technology, the Ford Airstream Concept has distinct cues from the spacecraft and environments portrayed in 2001: A Space Odyssey," says Thomas. "We're able to maximize the spaciousness of the interior, creating a lounge atmosphere in contrasting colors of cosmic red and white that provides an inviting experience for the ultimate journey."

A Sharp® dual-view screen centrally mounted on the instrument panel provides a camera view and secondary driver-oriented information, while allowing the front-seat passenger to view DVDs and post mobile blogs. The driver and front-seat passenger will navigate in style in modern, pod-shaped swiveling captain's chairs that also rotate so they can easily socialize.

In the rear, lounge-like seating is sculptural, creating a continuous cocoon-like environment wrapped in bold red B&B Italia fabric. The focal point of the rear seating area is a 360-degree screen for entertainment and games. The unique screen also creates ambient mood settings, including a modern lava lamp and virtual fire, as well as a live camera feed. 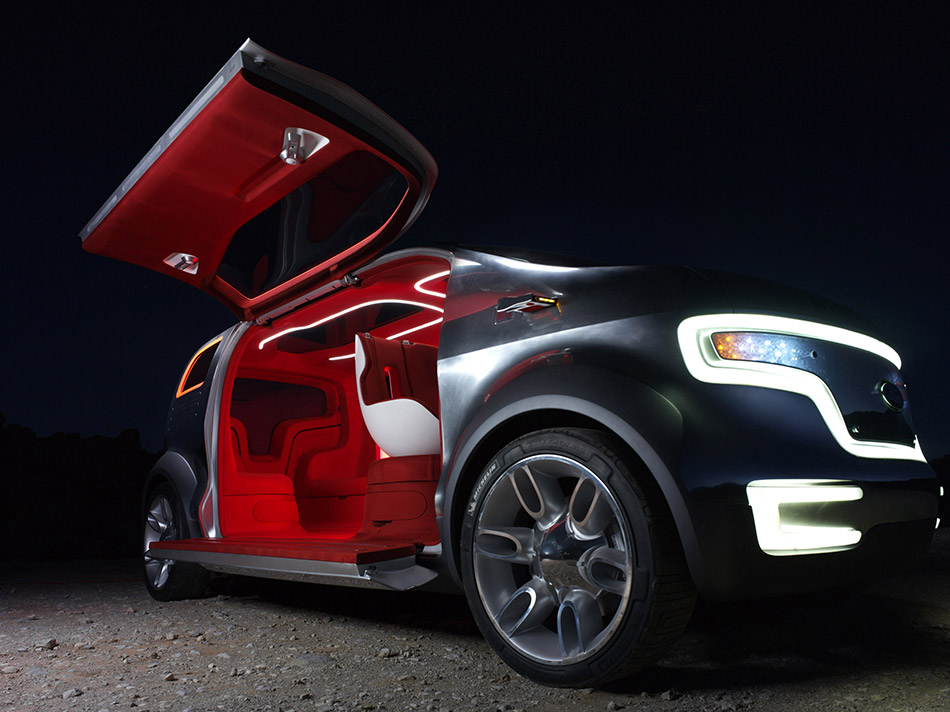 How the Rubber Meets the Road

The new HySeries Drive plug-in hydrogen fuel cell featured in the Ford Airstream Concept is more than a concept.

This powertrain is already on the road and driving in a Ford Edge prototype. Ford scientists and engineers created this vehicle with partial funding from the United States Department of Energy. The HySeries Drive delivers the combined city/highway equivalent fuel economy of 41 miles per gallon.

In this application, the fuel cell's sole function is to recharge the vehicle's lithium-ion battery pack as needed. This allows it to work like a portable generator, instead of an engine, as had been the case in previous Ford fuel cell vehicles.

The new fuel cell, supplied by Ford partner Ballard, operates in a steady state, allowing a significantly smaller, less expensive fuel cell and drastically improving the durability of the fuel cell. With this system, the fuel cell delivers the power needed to recharge the lithium-ion batteries, rather than to be the primary power source to drive the wheels, as in a typical fuel cell-powered vehicle.

In pure electric mode, the Ford Airstream Concept can travel 25 miles before the fuel cell begins operating to recharge the vehicle's 336-volt lithium-ion battery pack. With the hydrogen-powered fuel cell, the range increases another 280 miles for a total of 305 miles.

"Inside, outside and under the hood, the Ford Airstream Concept speaks to the future," Mays said. "Ford is looking out onto the horizon and imbuing crossovers with emotion, made even more powerful by our association with Airstream."