Probably largely uncontested is the fact that the optically renewed in 2011 Jaguar XF sparkles of exclusivity in the upper middle class. Further optimizing the inner and outer values of this conservatively trimmed on understatement XF 3.0 D-S bi-turbo sedan with 8 gear paddle shift automatic transmission and 275 serial HP is the declared aim of the Augsburg, Germany, 2M-Designs company.

The in a way daily tasks of the Augsburg team as selected specialized on PFW (platinum wrapping films) company with innovative Bruxafol foil solutions are car full wrappings with absolutely professional processing and mounting, always with competent consulting beforehand. 2M-Designs calls it Premium-PWF. The here presented Jaguar was wrapped with PWF Diamond White in combination with Black Brushed, whereas the window tinting is dominated by a green tinge. 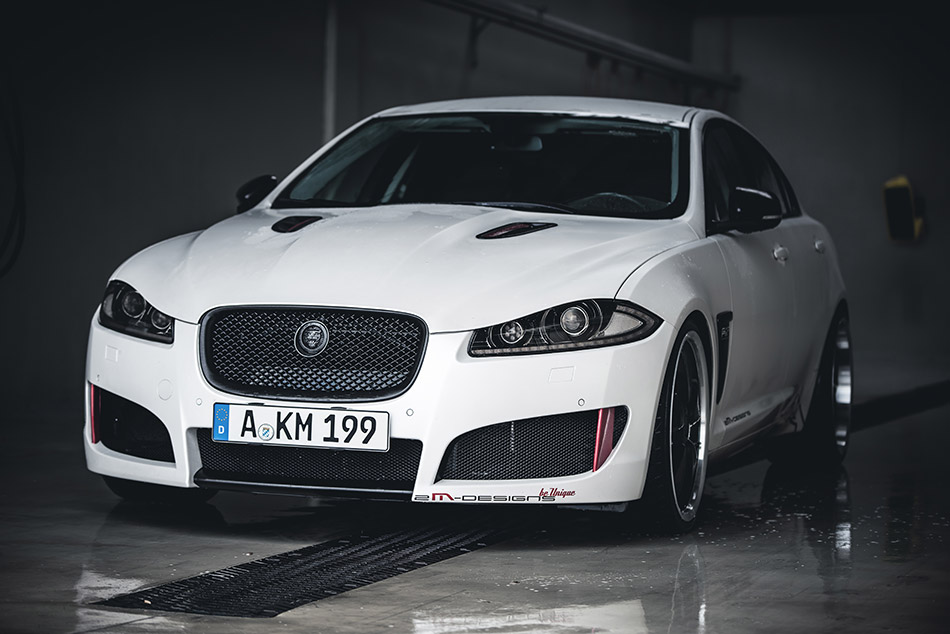 Before the Augsburg Design agency has stuck on the full wrapping, there have been made still some cosmetic amendments. The matching to the Jaguar XFR-S design front spoiler or the whole body kit, respectively, is on spot. The diffusor in original carbon is part of the body kit and custom built – the engine bonnet air scoops likewise. The installed exhaust system with the four end pipes comes from the tuning forgery Loder1899 in Unterumbach, Germany (about half the way from Augsburg to Munich), a partner company of 2M-Designs. The hollow spoke rims, mounted by Loder1899 already to a Ford GT40, are here in 21 inches with 255/30ZR21 tires on front and 295/35ZR21 on the rear axle. Tires, by the way: After having made intensive tests the 2M-Designs crew has decided to use Conti tires further on. Lowering is materialized by 35 mm with Eibach suspensions, front and rear lamps are slightly tinted. By the way, the works on suspensions and exhaust system have been materialized by the partner company MB-Individual Cars. This is very handy, because the Michael Brandner team is located under the same address as 2M-Designs, too.

By the way, it was a brilliant stroke of 2M-Designs to get the two companies Loder1899 and MB-Individual Cars as partners on board. The notion of Premium of the Premium Car Wrapping company relates for 2M-Designs not only to the car wrapping, but also to the customer loyalty, beginning from the first project and going until the final handover to the client. The complete car retrofitting amounts up to 15,000 Euro!