"The XF epitomises the Jaguar sporting dynamic with its combination of innovative, seductive design and performance. In the XF Sportbrake this is complemented by a no-compromise approach to practicality and versatility." Adrian Hallmark, Global Brand Director, Jaguar Cars

The Jaguar XF Sportbrake builds on the extensive refresh received by the XF saloon for the 2012 model year which saw it adopt a more assertive appearance in line with the flagship XJ model - including striking new lightblade headlamp technology.

The Jaguar XF Sportbrake is entirely new from the B-pillar backwards, endowing it with a very different aesthetic, exemplified by the tautly-drawn elegance of the side-window line and highlighted by its polished finish. The conjunction of flowing rear window graphic, rising waist and estate roofline lends the XF Sportbrake a dynamic, broad-shouldered stance.

The design-led approach that created the Jaguar XF Sportbrake's exterior has been achieved in tandem with the goal of maximising practicality. The extended roofline affords rear-seat passengers an additional 48mm of headroom and the seats offer both a 60:40 split fold function and integral ski hatch. Remote-fold levers inside the load-space opening allow the seats to be stowed flat quickly and easily, creating a cargo volume of up to 1675 litres.

Befitting the Jaguar XF Sportbrake's perfect balance between usability and beauty, it is powered exclusively by Jaguar's range of powerful, refined and efficient diesel engines, driving the rear wheels via an eight-speed automatic gearbox. The 2.2-litre engine is fitted with Jaguar's Intelligent Stop-Start system, making it the company's most efficient powertrain to date, while the 3.0-litre twin-turbo V6 is available in two states of tune, with 275PS in the range-topping Diesel S.

Launched in 2008, the XF introduced a coupe-like profile to the sporting saloon template and received plaudits worldwide for its seductive combination of dynamics, performance, quality, design and luxury.

Substantially redesigned both inside and out for the 2012 model year, the saloon is now joined by the Jaguar XF Sportbrake which builds on the model's undoubted performance credentials and provides an additional level of practicality.

The Jaguar design philosophy is based on the smooth, uninterrupted flow of lines that lead the eye along and around the vehicle and this is readily apparent in the Jaguar XF Sportbrake which, despite sharing an identical wheelbase with the saloon, is imbued with even greater presence.

The first of these elegantly simple feature lines begins in the propeller-inspired blades fitted to the side air intakes, leading the eye into the lower wing crease and then along the sills of the car and around the rear bumper. The second feature line runs up from the outer edge of the same intakes, defining the edges of the front wings before wrapping the entire way around the car, creating the XF Sportbrake's muscular shoulder line.

From the leading edges of the grille, strong feature lines rise over the bonnet, then seamlessly into the A-pillars and over the roof, defining the load area before flowing down to form the slope of the tailgate and rear bumper. The roofline itself is echoed by polished roof rails (when specified) that add both functionality as well as a strong feature element. The signature Jaguar side window graphic is here seen in its most elegant and elongated form, stretched backwards to the rear windscreen like a taut bowstring and highlighted with a brightly polished finish.

The clever conjunction of the side window graphic tapering down to meet the rising shoulder line not only emphasises the Jaguar XF Sportbrake's strong haunches but also helps the rear roofline appear to taper elegantly towards the tail. This impression of fluidity is heightened by the use of gloss black finishers on the rear pillars, providing a wraparound effect in conjunction with the tinted rear screen, an aesthetic inspired by the superstructures of luxury yachts. The rear lamps feature LED technology for brake, light and indicator functions and, by their width and the manner in which they sandwich the chrome signature blade, emphasise the solid rear stance of the Jaguar XF Sportbrake.

The Jaguar XF Sportbrake is also available with two optional exterior design packages that serve to further strengthen the assertiveness of its appearance. The Aero Pack (standard on the 'S' model) adds a deeper front bumper, side sills and rear valance plus a rear spoiler enhancement - a tailgate spoiler being standard on all models. The Black Pack replaces the exterior bright finishes with gloss black and pairs them with similarly finished alloy wheels to create new colour combinations that are subtly distinctive and eye-catching.

"Creating the Sportbrake was a great opportunity for us to extend the XF's design aesthetic. The flow and connection of lines that lead the eye around the car result in an entirely practical estate car consistent with Jaguar's reputation for drama and elegance." Wayne Burgess, Studio Director, Jaguar Design

As with the exterior, the cabin of the XF has been upgraded to ensure it retains that essential Jaguar appeal, creating a sense of sporting luxury by using the finest combinations of premium quality, crafted materials, complemented by the use of intuitive technology.

A centrally-mounted touch-screen offers control of the navigation system and a range of other functions, while the switchgear features new soft-touch matt black paint and a soft phosphor blue illumination theme throughout. The metallicAurorafinish to the majority of the brightwork complements new aluminium and veneer accents. More sculpted, heavily bolstered front seats introduced for the 2012 model year hint at the dynamic potential of the car and feature a 'racetrack' design device that creates a sporting bucket seat aesthetic.

For the Jaguar XF Sportbrake, entirely new rear seats, which allow generous seating for five, are comprehensively redesigned and feature an integral ski hatch and a 60:40 split. Rear passengers also enjoy an additional 48mm of headroom.

Remote-fold levers situated just inside the tailgate allow the rear seats to be folded down with just one touch to provide an uninterrupted load surface that is 1970mm in length. The practicality of the Jaguar XF Sportbrake's load-space is further enhanced by its width which allows, for instance, sideways stowage of golf clubs. The tailgate features soft-close power latching and can be specified with a fully powered open and close function.

The load-space displays Jaguar's typical attention to detail as it is trimmed in materials identical in quality to the Jaguar XF Sportbrake's cabin. The central portion of the load-space floor can be lifted to reveal an extra, hidden storage compartment and can also fold and lock into position to quickly and easily divide up the bay.

The practicality of the load-space is extended through the inclusion of a floor rail system, which allows the quick fitment and release, for example, of optional nets and retaining bars to compartmentalise the space. A wide range of accessories engineered for the Jaguar XF Sportbrake will allow owners to extend its versatility still further by organising or extending its carrying capacity. 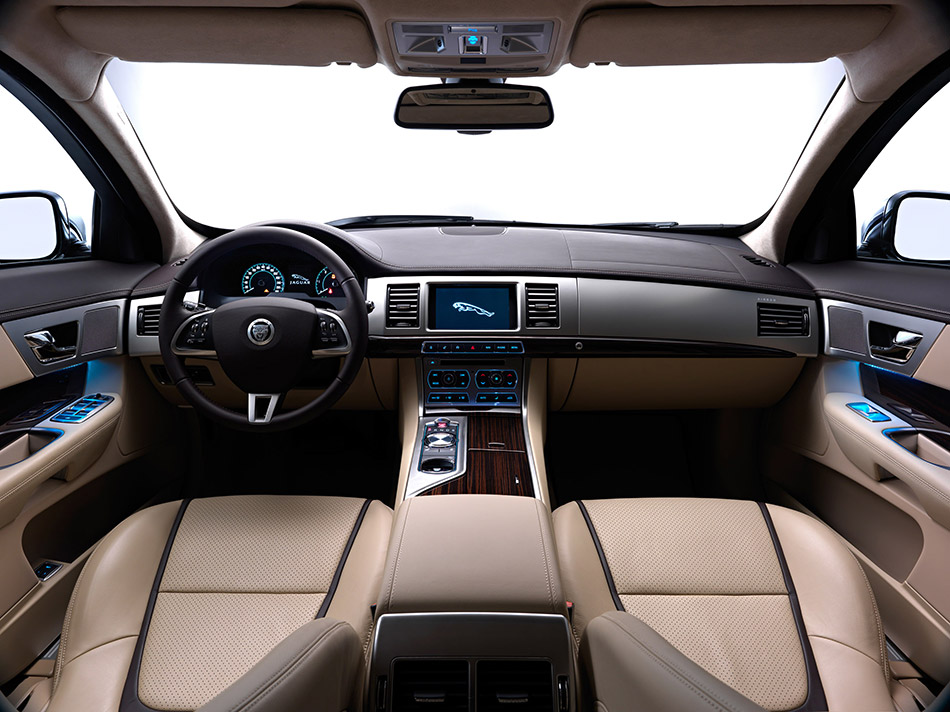 A towbar can also be specified - when not needed the tow-hitch can be removed quickly, stored in a dedicated stowage space inside the boot, and replaced with a rear valance cover to disguise its mounting point. When fitted with the towbar, the Jaguar XF Sportbrake's Trailer Sway Mitigation system is activated. This uses the car's Anti-Lock Braking and stability control systems to reduce the risk of 'snaking' when towing.

"Jaguar is rightly praised for its design-led products but in creating the Jaguar XF Sportbrake we were careful to ensure that this was balanced with the engineering integrity required to create an estate car that is as usable as it is enjoyable." Andrew Whyman, Chief Programme Engineer, Jaguar XF

The Jaguar XF Sportbrake firmly emphasises both the practical and sporting sides of its character through its powertrain choices. Exclusively fitted with Jaguar's range of four-cylinder 2.2-litre and V6 3.0-litre diesel engines, the XF Sportbrake offers an exemplary combination of refinement, fuel economy, low emissions, plentiful power and refinement.

The 2.2-litre four-cylinder engine is offered in combination with an eight-speed gearbox and Jaguar's Intelligent Stop-Start system, enabling the Jaguar XF Sportbrake to offer the performance and driver appeal expected of a Jaguar with reduced emissions and improved fuel consumption. When the car comes to a halt a range of parameters are automatically assessed and, if suitable, the engine is stopped. A Twin Solenoid Starter then restarts the engine in less time than it takes the driver's foot to move from the brake to the accelerator. The system also offers 'change of mind' functionality, enabling the engine to quickly restart even during its rundown phase to allow the driver to, for example, exploit a gap in traffic at a junction.

Jaguar's 3.0-litre twin-turbo V6 engine is offered in two states of tune in the Jaguar XF Sportbrake, both mated to the same eight-speed gearbox that in all models offers driver control via steering wheel-mounted paddles. The range-topping 'S' model offers 275PS (202kW) and 600Nm (442lb/ft) of torque, fulfilling all the requirements of an enthusiastic driver.

Every derivative of the Jaguar XF Sportbrake is fitted as standard with self-levelling air suspension at the rear to replace the coil springs fitted to the saloon. This system has been developed and tuned by Jaguar's chassis engineers to offer the same linear responses and ensure the XF Sportbrake offers identical dynamic attributes in terms of ride and handling as the saloon while keeping the car level even when fully laden.

Additionally, all Jaguar XF Sportbrake models are available with the Jaguar Adaptive Dynamics system which continuously monitors the suspension and, courtesy of active dampers, can alter damping rates up to 500 times a second to ensure optimal stability and handling with no loss of comfort. The system also allows the driver - at the touch of a button - to alter suspension and throttle response parameters to increase the level of involvement.

The intuitive use of driving technology is also evident in the XF Sportbrake via safety features including Adaptive Front Lighting, which deflects headlamp beam into corners, while intelligent high beam functionality automatically switches between low and high beam when appropriate. Adaptive Cruise Control enables the XF Sportbrake to monitor vehicles around it, automatically braking should a slower vehicle be ahead, then resuming set speed once the road is clear. Operating in conjunction with Adaptive Cruise Control is an Intelligent Emergency Brake system which, in the event of detecting the necessity for a severe stop, applies maximum optimal braking force.

"The XF Sportbrake matches the saloon in both aerodynamics and torsional stiffness. The use of air suspension has allowed us to create a car that captures the unique Jaguar combination of refinement and outstanding dynamic abilities regardless of its load." Mike Cross, Chief Engineer, Vehicle Integrity